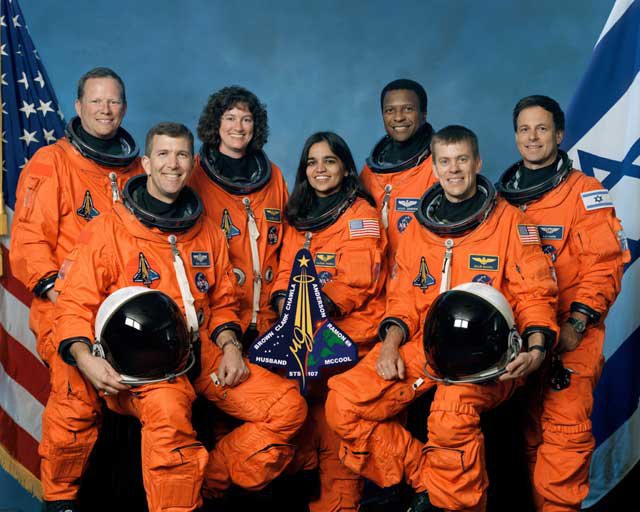 The final crew of the Space Shuttle Columbia was memorialized in the cosmos as seven asteroids orbiting the sun between Mars and Jupiter were named in their honor today.

The final crew of the Space Shuttle Columbia was memorialized in the cosmos as seven asteroids orbiting the sun between Mars and Jupiter were named in their honor today.

"Asteroids have been around for billions of years and will remain for billions more," said Dr. Raymond Bambery, Principal Investigator of JPL's Near-Earth Asteroid Tracking System. "I like to think that in the years, decades and millennia ahead people will look to the heavens, locate these seven celestial sentinels and remember the sacrifice made by the Columbia astronauts."

The 28th and final flight of Columbia (STS-107) was a 16-day mission dedicated to research in physical, life and space sciences. The seven astronauts aboard Columbia worked 24 hours a day, in two alternating shifts, successfully conducting approximately 80 separate experiments. On February 1, 2003, the Columbia and its crew were lost over the western United States during the spacecraft's re-entry into Earth's atmosphere.

Asteroids are rocky fragments left over from the formation of the solar system about 4.6 billion years ago. Most of the known asteroids orbit the Sun in a belt between Mars and Jupiter. Scientists think there are probably millions of asteroids, ranging in size from less than one kilometer (.62 mile) wide to hundreds of kilometers across.

More than 100,000 asteroids have been detected since the first was discovered back on January 1, 1801. Ceres, the first asteroid discovered, is also the largest at about 933 kilometers (580 miles) in diameter.

The Near-Earth Asteroid Tracking System is managed by JPL for NASA's Office of Space Science, Washington, D.C. JPL is a division of the California Institute of Technology.

Information about JPL's Near-Earth Asteroid Tracking System is available at http://neat.jpl.nasa.gov. More information on the newly named asteroids is at http://www.jpl.nasa.gov/releases/2003/columbia-tribute.cfm.

For information about NASA on the Internet, visit: http://www.nasa.gov.