Asteroids as Seen From Mars; A Curiosity Rover First 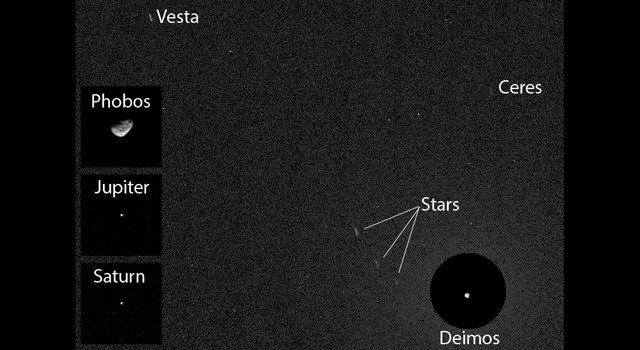 NASA's Curiosity Mars rover has caught the first image of asteroids taken from the surface of Mars. The image includes two asteroids, Ceres and Vesta. This version includes Mars' moon Deimos in a circular, exposure-adjusted inset and square insets at left from other observations the same night.› Full image and caption

These two -- the largest and third-largest bodies in the asteroid belt between Mars and Jupiter -- are the destinations of NASA's Dawn mission. Dawn orbited Vesta in 2011 and 2012, and is on its way to begin orbiting Ceres next year. Ceres is a dwarf planet, as well as an asteroid.

Ceres and Vesta appear as short, faint streaks in a 12-second exposure taken by Curiosity's Mast Camera (Mastcam) on April 20, 2014, PDT (April 21, UTC). An annotated version of the image, also including insets from other observations the same night, is online at:

"This imaging was part of an experiment checking the opacity of the atmosphere at night in Curiosity's location on Mars, where water-ice clouds and hazes develop during this season," said camera team member Mark Lemmon of Texas A&M University, College Station. "The two Martian moons were the main targets that night, but we chose a time when one of the moons was near Ceres and Vesta in the sky."

Ceres and Vesta are much larger and farther from Earth's orbit than the types of near-Earth asteroids under consideration for NASA's asteroid initiative. That initiative includes two separate, but related activities: the asteroid redirect mission and the grand challenge. NASA is currently developing concepts for the redirect mission that will employ a robotic spacecraft, driven by an advanced solar electric propulsion system, to capture a small near-Earth asteroid or remove a boulder from the surface of a larger asteroid. The spacecraft then will attempt to redirect the object into a stable orbit around the moon.

Astronauts will travel aboard NASA's Orion spacecraft, launched on the Space Launch System rocket, to rendezvous in lunar orbit with the captured asteroid. Once there, they will collect samples to return to Earth for study.

The grand challenge is a search for the best ideas for finding asteroids that pose a potential threat to human populations, and to accelerate the work NASA already is doing for planetary defense.

More information about the Dawn mission is available at these websites: http://www.nasa.gov/dawn http://dawn.jpl.nasa.gov .