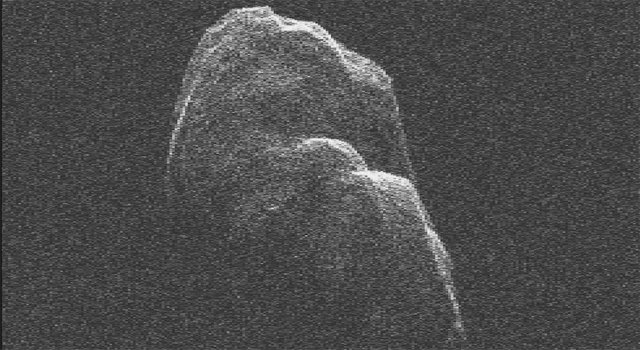 Scientists have generated a series of radar data images of a three-mile-long (4.8-kilometer) asteroid that made its closest approach to Earth on Dec. 12, 2012.

Scientists working with NASA's 230-foot-wide (70-meter) Deep Space Network antenna at Goldstone, Calif., have generated a series of radar data images of a three-mile-long (4.8-kilometer) asteroid that made its closest approach to Earth on Dec. 12, 2012. The radar data images of asteroid Toutatis have been assembled into a short movie, available online at: http://www.jpl.nasa.gov/video/index.php?id=1175 .

The images that make up the movie clip were generated with data taken on Dec. 12 and 13, 2012. On Dec. 12, the day of its closest approach to Earth, Toutatis was about 18 lunar distances, 4.3 million miles (6.9 million kilometers) from Earth. On Dec. 13, the asteroid was about 4.4 million miles (7 million kilometers), or about 18.2 lunar distances.

The radar data images of asteroid Toutatis indicate that it is an elongated, irregularly shaped object with ridges and perhaps craters. Along with shape detail, scientists are also seeing some interesting bright glints that could be surface boulders. Toutatis has a very slow, tumbling rotational state. The asteroid rotates about its long axis every 5.4 days and precesses (changes the orientation of its rotational axis) like a wobbling, badly thrown football, every 7.4 days.

The orbit of Toutatis is well understood. The next time Toutatis will approach at least this close to Earth is in November of 2069, when the asteroid will safely fly by at about 7.7 lunar distances, or 1.8 million miles (3 million kilometers). An analysis indicates there is zero possibility of an Earth impact over the entire interval over which its motion can be accurately computed, which is about the next four centuries.

This radar data imagery will help scientists improve their understanding of the asteroid's spin state, which will also help them understand its interior.

The resolution in the image frames is 12 feet (3.75 meters) per pixel.