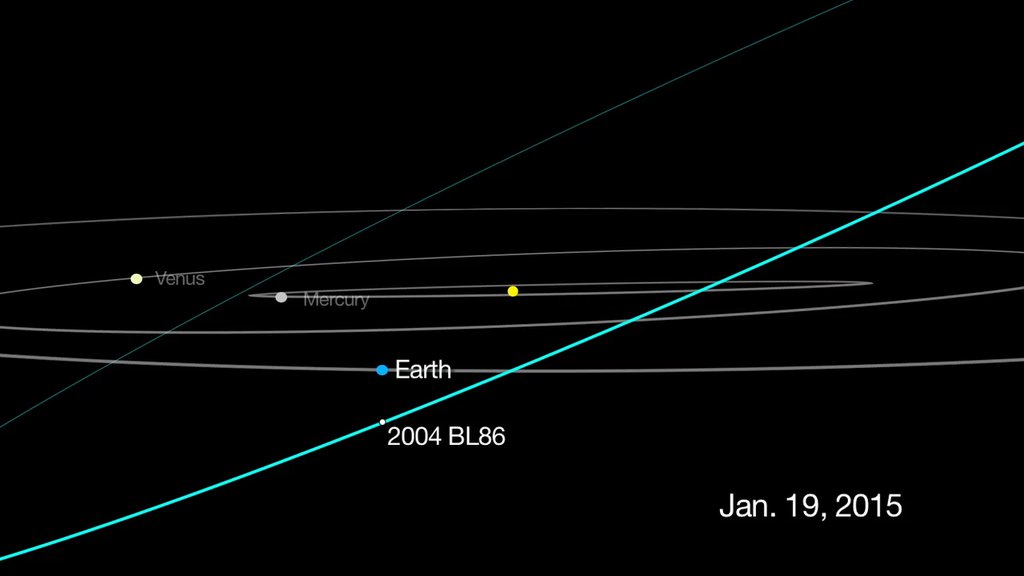 This graphic depicts the passage of asteroid 2004 BL86, which will come no closer than about three times the distance from Earth to the moon on Jan. 26, 2015. Due to its orbit around the sun, the asteroid is currently only visible by astronomers with large telescopes who are located in the southern hemisphere. But by Jan. 26, the space rock's changing position will make it visible to those in the northern hemisphere.
Credit: NASA/JPL-Caltech

The January 26 flyby of asteroid 2004 BL86 will be the closest by any known space rock this large until an asteroid flies past Earth in 2027.

An asteroid, designated 2004 BL86, will safely pass about three times the distance of Earth to the moon on January 26. From its reflected brightness, astronomers estimate that the asteroid is about a third of a mile (0.5 kilometers) in size. The flyby of 2004 BL86 will be the closest by any known space rock this large until asteroid 1999 AN10 flies past Earth in 2027.

At the time of its closest approach on January 26, the asteroid will be approximately 745,000 miles (1.2 million kilometers) from Earth.

"Monday, January 26 will be the closest asteroid 2004 BL86 will get to Earth for at least the next 200 years," said Don Yeomans, who is retiring as manager of NASA's Near Earth Object Program Office at the Jet Propulsion Laboratory in Pasadena, California, after 16 years in the position. "And while it poses no threat to Earth for the foreseeable future, it's a relatively close approach by a relatively large asteroid, so it provides us a unique opportunity to observe and learn more."

One way NASA scientists plan to learn more about 2004 BL86 is to observe it with microwaves (http://www.jpl.nasa.gov/news/news.php?release=2006-00a ). NASA's Deep Space Network antenna at Goldstone, California, and the Arecibo Observatory in Puerto Rico will attempt to acquire science data and radar-generated images of the asteroid during the days surrounding its closest approach to Earth.

"When we get our radar data back the day after the flyby, we will have the first detailed images," said radar astronomer Lance Benner of JPL, the principal investigator for the Goldstone radar observations of the asteroid. "At present, we know almost nothing about the asteroid, so there are bound to be surprises."

Asteroid 2004 BL86 was initially discovered on Jan. 30, 2004 by a telescope of the Lincoln Near-Earth Asteroid Research (LINEAR) survey in White Sands, New Mexico.

The asteroid is expected to be observable to amateur astronomers with small telescopes and strong binoculars.

"I may grab my favorite binoculars and give it a shot myself," said Yeomans. "Asteroids are something special. Not only did asteroids provide Earth with the building blocks of life and much of its water, but in the future, they will become valuable resources for mineral ores and other vital natural resources. They will also become the fueling stops for humanity as we continue to explore our solar system. There is something about asteroids that makes me want to look up."

NASA's Near-Earth Object Program Office is experiencing its first transition in leadership since it was formed almost 17 years ago. On Jan. 9, after a 39-year-long career at JPL, Yeomans retired. Paul Chodas, a long-time member of Yeomans' team at JPL, has been designated as the new manager.

NASA detects, tracks and characterizes asteroids and comets using both ground- and space-based telescopes. Elements of the Near-Earth Object Program, often referred to as "Spaceguard," discover these objects, characterize a subset of them and identify their close approaches to determine if any could be potentially hazardous to our planet.