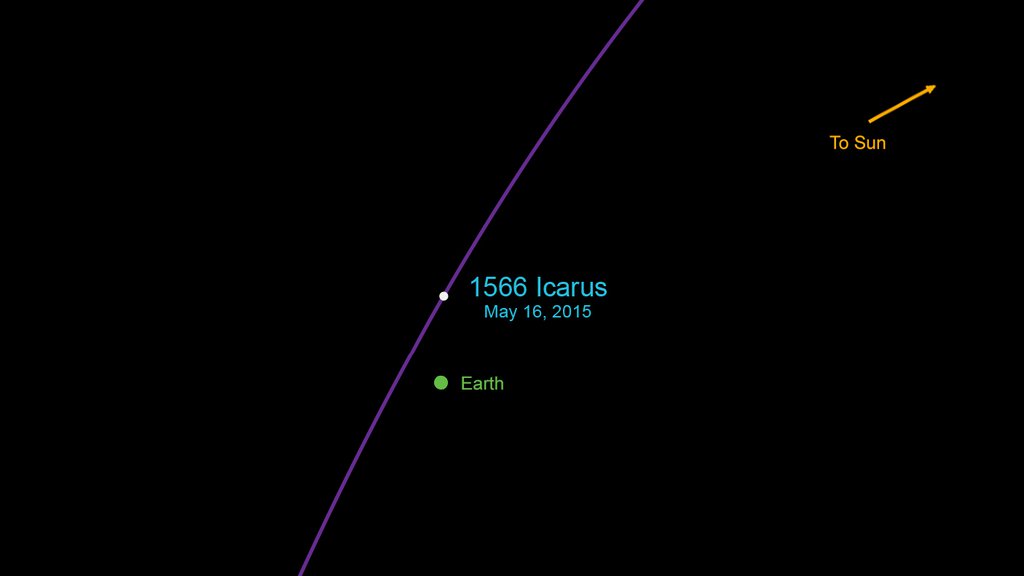 Asteroid Icarus will safely pass more than 21 times the distance of Earth to the moon on June 16, 2015.
Credit: NASA/JPL-Caltech

Asteroid Icarus will safely pass by Earth more than 21 times the distance of Earth to the moon on June 16.

Asteroid Icarus will safely pass by Earth at more than 21 times the distance of Earth to the moon on June 16. To put it another way, Icarus, one of the first near-Earth asteroids ever discovered (1949), will approach no closer than five million miles away (eight million kilometers). On June 14, 2090, the asteroid will approach marginally closer, with a close approach distance of about 17 lunar distances (four million miles, or six-and-a-half million kilometers).

Discovered back in 1949 using photographic plates on the 48-inch Schmidt telescope at Mount Palomar near San Diego, Icarus was one of early near-Earth asteroids. It has an eccentric orbit that takes it very close to the sun, only 17 million miles (27 million kilometers) above the sun's surface. That's less than half the distance of Mercury's average distance to the sun. The asteroid was appropriately named after the mythical boy whose wax wings melted when he flew too close to the sun. For many decades, Icarus held the record for the closest known sun-approaching asteroid, but we now know of many other asteroids that approach even closer.

In its current orbit, Icarus can approach to within about 4 million miles (6.5 million kilometers) to Earth, which means it's categorized as a potentially hazardous asteroid (PHA). Tuesday's flyby of about 5 million miles (8 million kilometers) is the closest Icarus has approached since 1968. That close encounter was noteworthy because it was the first time an asteroid was observed by radar. Icarus will be extensively observed by radar on this year's passage, and we may even obtain the first-ever images of this famous object.