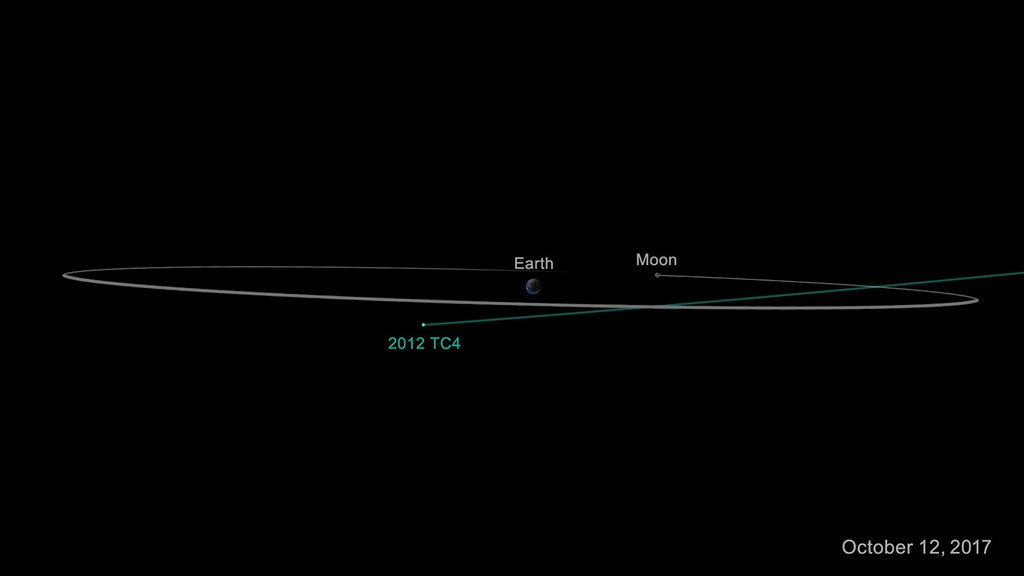 On Oct. 12, 2017, asteroid 2012 TC4 will safely fly past Earth. Even though scientists cannot yet predict exactly how close it will approach, they are certain it will come no closer to Earth than 4,200 miles (6,800 kilometers).
Credit: NASA/JPL-Caltech

Scientists plan to use a small asteroid's close approach to Earth this October to test NASA's network of observatories and scientists who work with planetary defense.

On July 27, 31, and then again on Aug. 5, the approaching asteroid 2012 TC4 was observed by Olivier Hainaut, Detlef Koschny and Marco Micheli of the European Space Agency using one of the European Southern Observatory's 8.2-meter telescopes at its Very Large Telescope Observatory. These are the first observations of the small asteroid since shortly after its discovery in 2012.

Asteroid 2012 TC4 is still very far from Earth, about 35 million miles (56 million kilometers) at the time of the observations. With an apparent magnitude of 26.4, it was still very faint. An object with this magnitude is about 60 billion times fainter than the planet Saturn as seen from a backyard tonight. The asteroid is approaching at about 30,000 mph (14 kilometers per second), and will continue to brighten - reaching 13th magnitude at time of closest approach.

The new observations of 2012 TC4 provide an important position fix on the asteroid, and enable scientists from NASA's Center for Near-Earth Object Studies (CNEOS) at the agency's Jet Propulsion Laboratory in Pasadena, California, to further refine its orbit and the distance at which it will fly past Earth at time of closest approach. The new calculations indicate that TC4 will fly safely past our planet on Oct. 12, at a distance of about 27,000 miles (43,500 kilometers) above the surface, or about one-eighth of the distance to the Moon. Additional observations of the asteroid are planned by NASA-funded and other astronomers, including those in the International Asteroid Warning Network, as part of an exercise of the recovery, characterization and reporting of a potentially hazardous object approaching Earth.

NASA scientists are excited about the upcoming close flyby of a small asteroid and plan to use its upcoming October close approach to Earth as an opportunity not only for science, but to test NASA's network of observatories and scientists who work with planetary defense.

The target of all this attention is asteroid 2012 TC4 -- a small asteroid estimated to be between 30 and 100 feet (10 and 30 meters) in size. On Oct. 12, TC4 will safely fly past Earth. Even though scientists cannot yet predict exactly how close it will approach, they are certain it will come no closer than 4,200 miles (6,800 kilometers) from the surface of Earth. The asteroid has been out of range of telescopes since 2012.

"Scientists have always appreciated knowing when an asteroid will make a close approach to and safely pass the Earth because they can make preparations to collect data to characterize and learn as much as possible about it," said Michael Kelley, program scientist and NASA Headquarters lead for the TC4 observation campaign. "This time we are adding in another layer of effort, using this asteroid flyby to test the worldwide asteroid detection and tracking network, assessing our capability to work together in response to finding a potential real asteroid threat."

Professor Vishnu Reddy of the University of Arizona's Lunar and Planetary Laboratory in Tucson leads the campaign to reacquire 2012 TC4 and sees it as an opportunity for the collaborative observation campaign to utilize the international aspect of the network. "This is a team effort that involves more than a dozen observatories, universities and labs across the globe so we can collectively learn the strengths and limitations of our near-Earth object observation capabilities," said Reddy. The goal of the TC4 campaign is to recover, track and characterize 2012 TC4. "This effort will exercise the entire system, to include the initial and follow-up observations, precise orbit determination, and international communications."

Scientists from NASA's Center for Near-Earth Object Studies (CNEOS) at the Jet Propulsion Laboratory in Pasadena, California, have determined that while at closest approach, asteroid 2012 TC4 will pass no closer than 4,200 miles from Earth -- it will more likely pass much farther away, as far as 170,000 miles (270,000 kilometers), or two-thirds of the distance from Earth to the moon. These calculations are based on only seven days of tracking 2012 TC4 after it was discovered on Oct. 5, 2012, by the Panoramic Survey Telescope and Rapid Response System (Pan-STARRS) from Haleakala on the island of Maui, Hawaii. Further observations are needed to more precisely determine the asteroid's orbit.

Asteroid 2012 TC4 may be slightly larger than the space rock that hit Earth's atmosphere near Chelyabinsk, Russia, in February 2013. TC4 has not been seen since its 2012 discovery, when it sped past Earth at about one-fourth the distance from Earth to the moon. It has been too distant and too faint to be detected over the last five years. As it starts to approach Earth this summer, large telescopes will be used to detect it and re-establish the asteroid's precise trajectory. The new observations are expected to help refine knowledge about its orbit, narrowing the uncertainty about how far it will be from Earth at its closest approach in October.

"This is the perfect target for such an exercise because while we know the orbit of 2012 TC4 well enough to be absolutely certain it will not impact Earth, we haven't established its exact path just yet," said Paul Chodas, manager of the CNEOS at JPL. "It will be incumbent upon the observatories to get a fix on the asteroid as it approaches, and work together to obtain follow-up observations than make more refined asteroid orbit determinations possible."