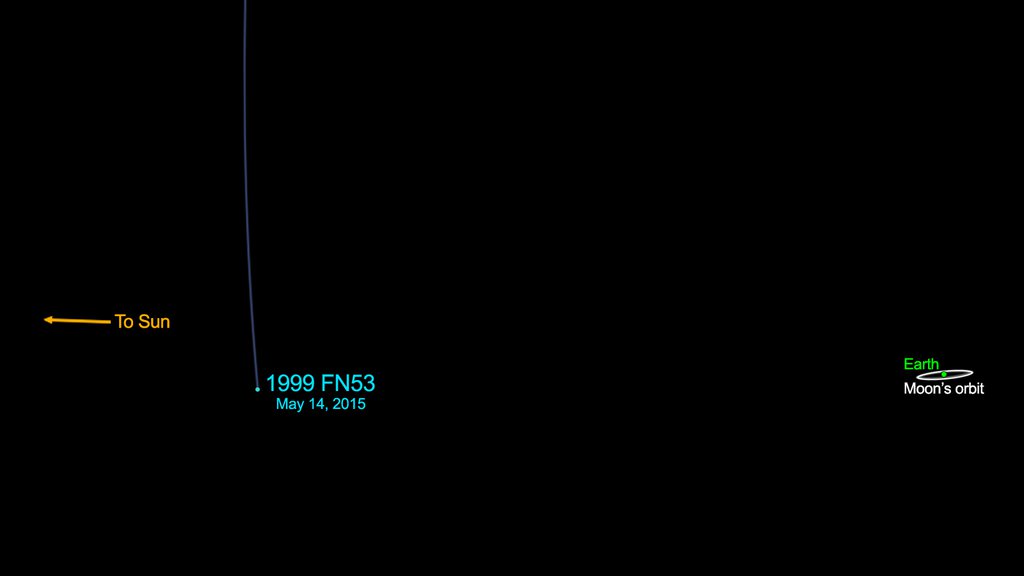 This graphic depicts the passage of asteroid 1999 FN53, which will come no closer than 26 times the distance from Earth to the moon on May 14, 2015.
Credit: NASA/JPL-Caltech

An asteroid, designated 1999 FN53, will safely pass more than 26 times the distance of Earth to the moon on May 14.

An asteroid, designated 1999 FN53, will safely pass more than 26 times the distance of Earth to the moon on May 14. To put it another way, at its closest point, the asteroid will get no closer than 6.3 million miles away (10 million kilometers). It will not get closer than that for well over 100 years. And even then, (119 years from now) it will be so far away it will not affect our planet in any way, shape or form. 1999 FN53 is approximately 3,000 feet (1 kilometer) across.

"This is a flyby in the loosest sense of the term," said Paul Chodas, manager of NASA's Near-Earth Object Program Office, at the Jet Propulsion Laboratory in Pasadena, California. "We can compute the motion of this asteroid for the next 3,000 years and it will never be a threat to Earth. This is a relatively unremarkable asteroid, and its distant flyby of Earth tomorrow is equally unremarkable."