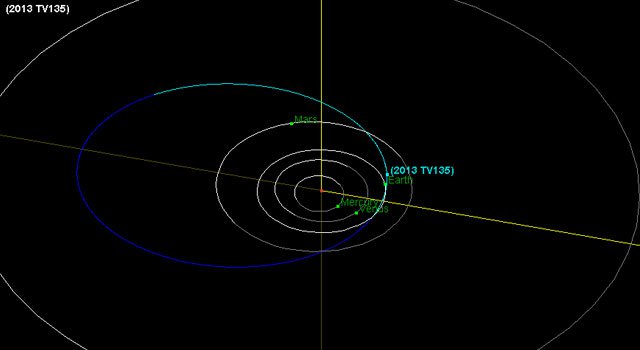 This diagram shows the orbit of asteroid 2013 TV135 (in blue), which has just a one-in-63,000 chance of impacting Earth. Its risk to Earth will likely be further downgraded as scientists continue their investigations.
Credit: NASA/JPL-Caltech

The probability asteroid 2013 TV135 could impact Earth is only one in 63,000. Additional observations are likely to result in a dramatic reduction, or complete elimination, of any risk of Earth impact.

Newly discovered asteroid 2013 TV135 made a close approach to Earth on Sept. 16, when it came within about 4.2 million miles (6.7 million kilometers). The asteroid is initially estimated to be about 1,300 feet (400 meters) in size and its orbit carries it as far out as about three quarters of the distance to Jupiter's orbit and as close to the sun as Earth's orbit. It was discovered on Oct. 8, 2013, by astronomers working at the Crimean Astrophysical Observatory in Ukraine. As of Oct. 14, asteroid 2013 TV135 is one of 10,332 near-Earth objects that have been discovered.

With only a week of observations for an orbital period that spans almost four years, its future orbital path is still quite uncertain, but this asteroid could be back in Earth's neighborhood in 2032. However, NASA's Near-Earth Object Program Office states the probability this asteroid could then impact Earth is only one in 63,000. The object should be easily observable in the coming months and once additional observations are provided to the Minor Planet Center in Cambridge, Mass., the initial orbit calculations will be improved and the most likely result will be a dramatic reduction, or complete elimination, of any risk of Earth impact.

"To put it another way, that puts the current probability of no impact in 2032 at about 99.998 percent," said Don Yeomans, manager of NASA's Near-Earth Object Program Office at the Jet Propulsion Laboratory in Pasadena, Calif. "This is a relatively new discovery. With more observations, I fully expect we will be able to significantly reduce, or rule out entirely, any impact probability for the foreseeable future."

NASA detects, tracks and characterizes asteroids and comets passing close to Earth using both ground- and space-based telescopes. The Near-Earth Object Observations Program, commonly called "Spaceguard," discovers these objects, characterizes a subset of them and identifies their orbits to determine if any could be potentially hazardous to our planet.