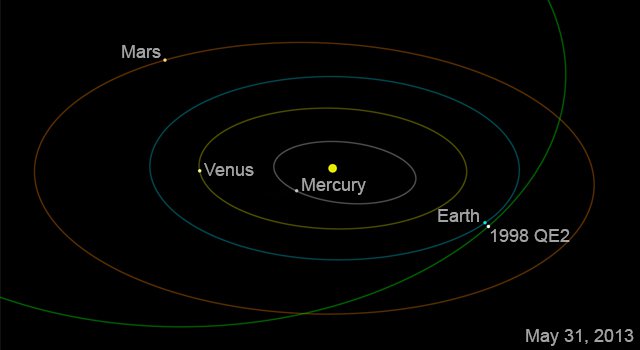 On May 31, 2013, asteroid 1998 QE2 will sail serenely past Earth, getting no closer than about 3.6 million miles (5.8 million kilometers), or about 15 times the distance between Earth and the moon. And while QE2 is not of much interest to those astronomers and scientists on the lookout for hazardous asteroids, it is of interest to those who dabble in radar astronomy and have a 230-foot (70-meter) -- or larger -- radar telescope at their disposal.

"Asteroid 1998 QE2 will be an outstanding radar imaging target at Goldstone and Arecibo and we expect to obtain a series of high-resolution images that could reveal a wealth of surface features," said radar astronomer Lance Benner, the principal investigator for the Goldstone radar observations from NASA's Jet Propulsion Laboratory in Pasadena, Calif. "Whenever an asteroid approaches this closely, it provides an important scientific opportunity to study it in detail to understand its size, shape, rotation, surface features, and what they can tell us about its origin. We will also use new radar measurements of the asteroid's distance and velocity to improve our calculation of its orbit and compute its motion farther into the future than we could otherwise."

The closest approach of the asteroid occurs on May 31 at 1:59 p.m. Pacific (4:59 p.m. Eastern / 20:59 UTC). This is the closest approach the asteroid will make to Earth for at least the next two centuries. Asteroid 1998 QE2 was discovered on Aug. 19, 1998, by the Massachusetts Institute of Technology Lincoln Near Earth Asteroid Research (LINEAR) program near Socorro, New Mexico.

The asteroid, which is believed to be about 1.7 miles (2.7 kilometers) or nine Queen Elizabeth 2 ship-lengths in size, is not named after that 12-decked, transatlantic-crossing flagship for the Cunard Line. Instead, the name is assigned by the NASA-supported Minor Planet Center in Cambridge, Mass., which gives each newly discovered asteroid a provisional designation starting with the year of first detection, along with an alphanumeric code indicating the half-month it was discovered, and the sequence within that half-month.

Radar images from the Goldstone antenna could resolve features on the asteroid as small as 12 feet (3.75 meters) across, even from 4 million miles away.

"It is tremendously exciting to see detailed images of this asteroid for the first time," said Benner. "With radar we can transform an object from a point of light into a small world with its own unique set of characteristics. In a real sense, radar imaging of near-Earth asteroids is a fundamental form of exploring a whole class of solar system objects."

Asteroids, which are always exposed to the sun, can be shaped like almost anything under it. Those previously imaged by radar and spacecraft have looked like dog bones, bowling pins, spheroids, diamonds, muffins, and potatoes. To find out what 1998 QE2 looks like, stay tuned. Between May 30 and June 9, radar astronomers using NASA's 230-foot-wide (70 meter) Deep Space Network antenna at Goldstone, Calif., and the Arecibo Observatory in Puerto Rico, are planning an extensive campaign of observations. The two telescopes have complementary imaging capabilities that will enable astronomers to learn as much as possible about the asteroid during its brief visit near Earth.

NASA places a high priority on tracking asteroids and protecting our home planet from them. In fact, the U.S. has the most robust and productive survey and detection program for discovering near-Earth objects. To date, U.S. assets have discovered over 98 percent of the known NEOs.

In 2012, the NEO budget was increased from $6 million to $20 million. Literally dozens of people are involved with some aspect of near-Earth object (NEO) research across NASA and its centers. Moreover, there are many more people involved in researching and understanding the nature of asteroids and comets, including those that come close to the Earth, plus those who are trying to find and track them in the first place.

In 2016, NASA will launch a robotic probe to one of the most potentially hazardous of the known NEOs. The OSIRIS-REx mission to asteroid (101955) Bennu will be a pathfinder for future spacecraft designed to perform reconnaissance on any newly-discovered threatening objects. Aside from monitoring potential threats, the study of asteroids and comets enables a valuable opportunity to learn more about the origins of our solar system, the source of water on Earth, and even the origin of organic molecules that lead to the development of life.

NASA recently announced developing a first-ever mission to identify, capture and relocate an asteroid for human exploration. Using game-changing technologies advanced by the Administration, this mission would mark an unprecedented technological achievement that raises the bar of what humans can do in space. Capturing and redirecting an asteroid will integrate the best of NASA's science, technology and human exploration capabilities and draw on the innovation of America's brightest scientists and engineers.