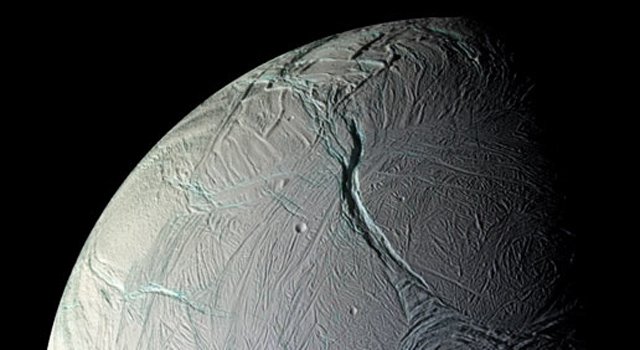 On Oct. 5, 2008, just after coming within 25 kilometers (15.6 miles) of the surface of Enceladus, NASA’s Cassini captured this stunning mosaic as the spacecraft sped away from this geologically active moon of Saturn. Full image and caption
Credit: NASA/JPL/Space Science Institute 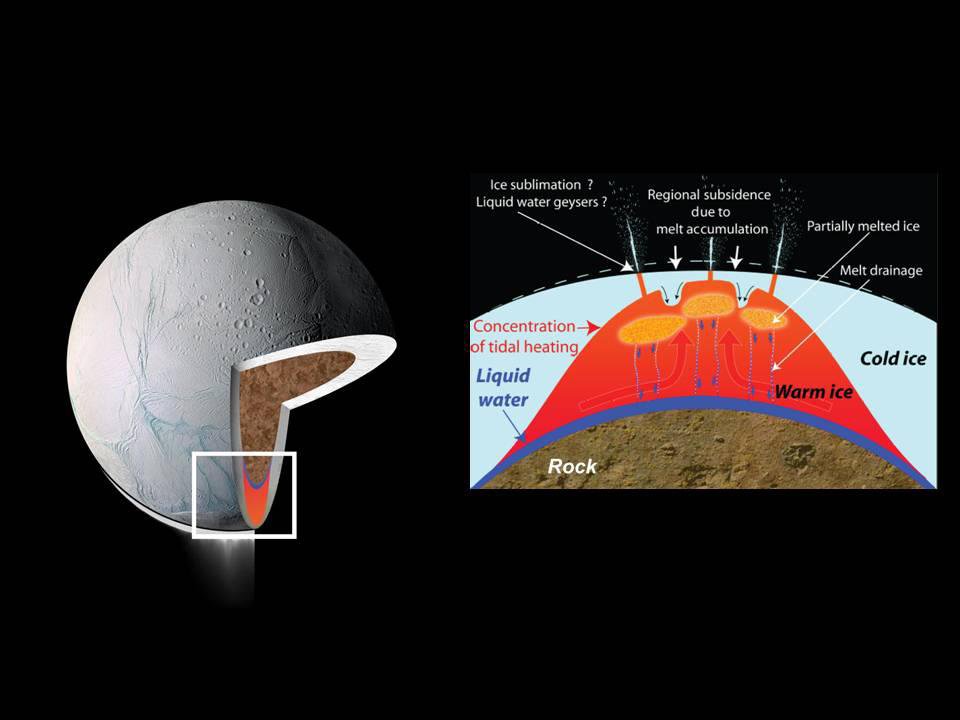 These drawings depict explanations for the source of intense heat that has been measured coming from Enceladus' south polar region. Full image and caption

Blobs of warm ice that periodically rise to the surface and churn the icy crust on Saturn's moon Enceladus explain the quirky behavior of the moon's south polar region.

Blobs of warm ice that periodically rise to the surface and churn the icy crust on Saturn's moon Enceladus explain the quirky heat behavior and intriguing surface of the moon's south polar region, according to a new paper using data from NASA's Cassini spacecraft.

"Cassini appears to have caught Enceladus in the middle of a burp," said Francis Nimmo, a planetary scientist at the University of California Santa Cruz and a co-author of the new paper in Nature Geoscience. "These tumultuous periods are rare and Cassini happens to have been watching the moon during one of these special epochs."

The south polar region captivates scientists because it hosts the fissures known as "tiger stripes" that spray water vapor and other particles out from the moon. While the latest paper, released on Jan. 10, doesn't link the churning and resurfacing directly to the formation of fissures and jets, it does fill in some of the blanks in the region's history.

"This episodic model helps to solve one of the most perplexing mysteries of Enceladus," said Bob Pappalardo, Cassini project scientist at NASA's Jet Propulsion Laboratory in Pasadena, Calif., of the research done by his colleagues. "Why is the south polar surface so young? How could this amount of heat be pumped out at the moon's south pole? This idea assembles the pieces of the puzzle."

About four years ago, Cassini's composite infrared spectrometer instrument detected a heat flow in the south polar region of at least 6 gigawatts, the equivalent of at least a dozen electric power plants. This is at least three times as much heat as an average region of Earth of similar area would produce, despite Enceladus' small size. The region was also later found by Cassini's ion and neutral mass spectrometer instrument to be swiftly expelling argon, which comes from rocks decaying radioactively and has a well-known rate of decay.

Calculations told scientists it would be impossible for Enceladus to have continually produced heat and gas at this rate. Tidal movement – the pull and push from Saturn as Enceladus moves around the planet – cannot explain the release of so much energy.

The surface ages of different regions of Enceladus also show great diversity. Heavily cratered plains in the northern part of the moon appear to be as old as 4.2 billion years, while a region near the equator known as Sarandib Planitia is between 170 million and 3.7 billion years old. The south polar area, however, appears to be less than 100 million years old, possibly as young as 500,000 years.

Craig O'Neill of Macquarie University in Sydney, Australia, and Nimmo, who was partially funded by the NASA Outer Planets Research program, adapted a model that O'Neill had developed for the convection of Earth's crust. For Enceladus, which has a surface completely covered in cold ice that is fractured by the tug of Saturn's gravitational pull, the scientists stiffened up the crust. They picked a strength somewhere between that of the malleable tectonic plates on Earth and the rigid plates of Venus, which are so strong, it appears they never get sucked down into the interior.

Their model showed that heat building up from the interior of Enceladus could be released in episodic bubbles of warm, light ice rising to the surface, akin to the rising blobs of heated wax in a lava lamp. The rise of the warm bubbles would send cold, heavier ice down into the interior. (Warm is, of course, relative. Nimmo said the bubbles are probably just below freezing, which is 273 degrees Kelvin or 32 degrees Farenheit, whereas the surface is a frigid 80 degrees Kelvin or -316 degrees Farenheit.)

The model fits the activity on Enceladus when the churning and resurfacing periods are assumed to last about 10 million years, and the quiet periods, when the surface ice is undisturbed, last about 100 million to two billion years. Their model suggests the active periods have occurred only 1 to 10 percent of the time that Enceladus has existed and have recycled 10 to 40 percent of the surface. The active area around Enceladus's south pole is about 10 percent of its surface.

The Cassini-Huygens mission is a cooperative project of NASA, the European Space Agency and the Italian Space Agency. JPL, a division of the California Institute of Technology in Pasadena, manages the mission for NASA's Science Mission Directorate in Washington. The Cassini orbiter was designed, developed and assembled at JPL.