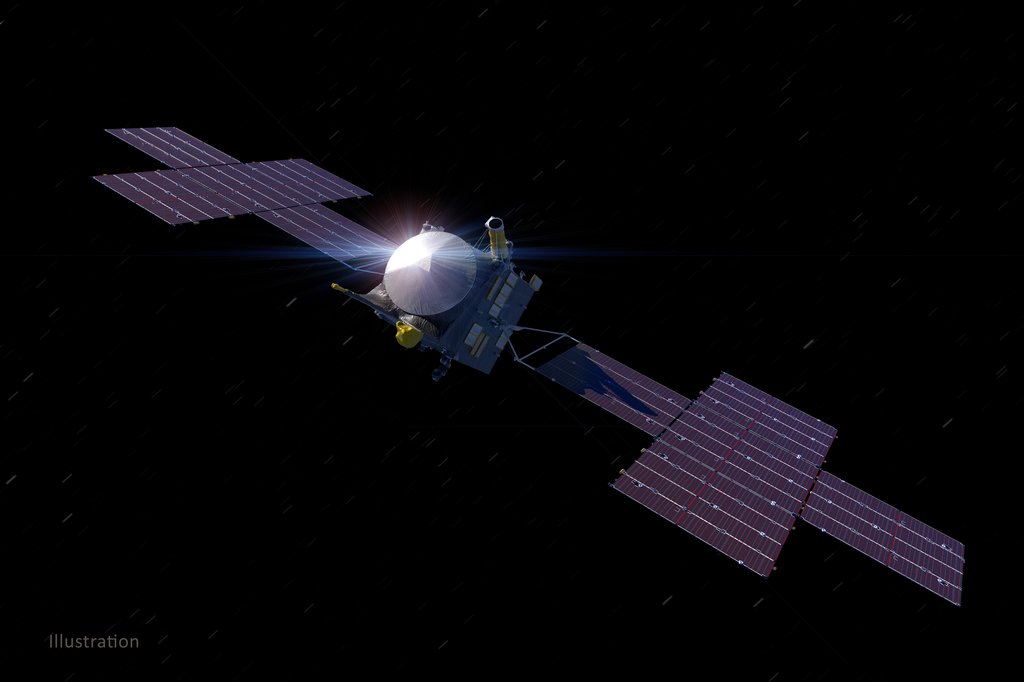 This illustration depicts NASA’s Psyche spacecraft. Set to launch in 2023, the Psyche mission will explore a metal-rich asteroid of the same name that lies in the main asteroid belt between Mars and Jupiter.

The mission is moving forward as previously announced, and NASA will incorporate recommendations from the board to ensure its success.

NASA and the agency’s Jet Propulsion Laboratory (JPL) in Southern California, which leads Psyche, shared a response Friday to the results of an independent review board convened to determine why the mission to study a metal-rich asteroid of the same name missed its planned 2022 launch opportunity.

The mission is moving forward as previously announced, and NASA will incorporate recommendations from the board to ensure its success.

The review board – convened at the request of NASA and JPL – found a significant factor in the delay was an imbalance between the workload and the available workforce at JPL. NASA will work closely with JPL management over the coming months to address the challenges raised in the report. The board will meet again in spring 2023 to assess progress.

For the Psyche mission, the board recommended increasing staffing, establishing open communications and an improved reporting system, as well as strengthening the review system to better highlight what issues might affect mission success.

In response, the Psyche project has added appropriately experienced leaders and project staff throughout the project, including filling the project chief engineer and guidance navigation and control cognizant engineer positions. JPL also formed a team to actively manage the staffing shortage across multiple projects including Psyche.

“We welcome this opportunity to hear the independent review board’s findings and have a chance to address the concerns,” said Thomas Zurbuchen, associate administrator of NASA’s Science Mission Directorate in Washington. “It’s our job to notice issues early – this report is essentially a canary in the coal mine – and address them. Information like this helps us for more than just Psyche, but also for upcoming key missions such as Europa Clipper and Mars Sample Return.”

The independent review board also looked at JPL as a whole. The report made recommendations to address what it called inadequate flight project staffing – in both number of personnel and experience – as well as erosion of line organization technical acumen, and the post-pandemic work environment.

In response, changes to JPL’s organizational reporting structure and reviews are in work, which along with other actions, are designed to increase institutional insight and oversight of missions including Psyche. JPL also is instituting new internal staffing approaches and working with industrial partners to support staffing needs and to redouble efforts to strengthen experienced leadership at all levels.

“I appreciate the thoughtful work of the Psyche independent review board,” said Laurie Leshin, JPL director. “The board members worked diligently over the past several months to help JPL uncover and understand issues related to the delay of the Psyche launch. Their insights are helping JPL and NASA take the steps necessary to ensure success on Psyche and future missions.”

To support JPL’s staffing needs, NASA anticipates delaying the launch of the Venus Emissivity, Radio Science, InSAR, Topography, and Spectroscopy (VERITAS) mission for at least three years. This choice would allow experienced staff at JPL to complete development of strategic flagship missions further along in their development. A delay of VERITAS, a mission in early formulation, would also free up additional resources to enable the continuation of Psyche and positively affect other planetary funding needs.

VERITAS is a JPL-led mission designed to search for water and volcanic activity on Venus. It was selected in 2021 as one of two Venus proposals for the agency’s Discovery Program, a line of low-cost, competitive missions led by a single principal investigator. The mission, with planned contributions from the Italian Space Agency, German Aerospace Center, and French Space Agency, was originally expected to launch in December 2027. The mission is now scheduled to launch no earlier than 2031.

For a VERITAS delay, JPL will stand down their management and engineering teams for the mission and release the staff to other projects, while funding will be continued for science team support.

NASA’s response to review board, as well as a copy of the report, are available online: