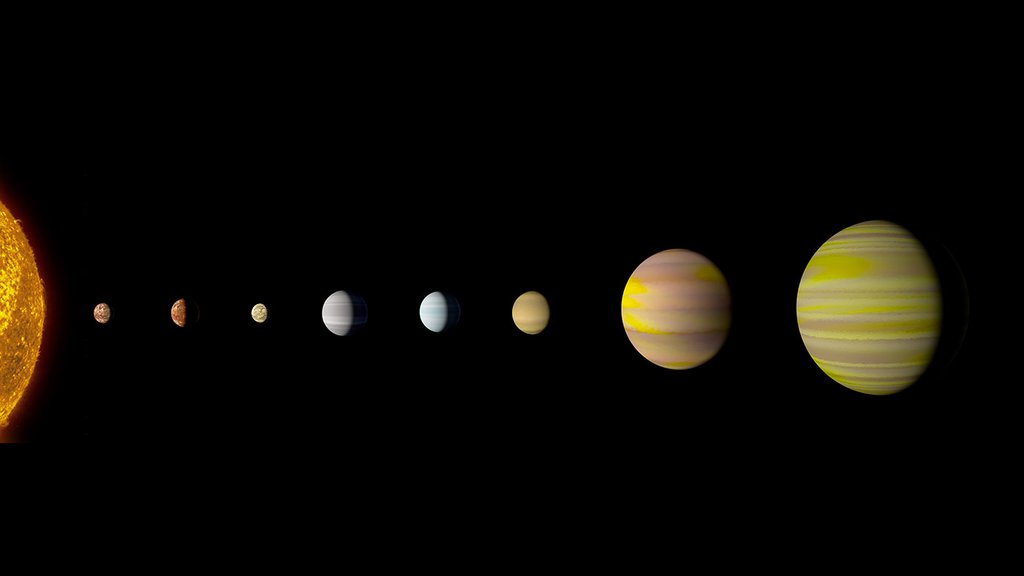 With the discovery of an eighth planet, the Kepler-90 system is the first to tie with our solar system in number of planets. Artist's concept.› Full image and caption
Credit: NASA/Ames Research Center/Wendy Stenzel 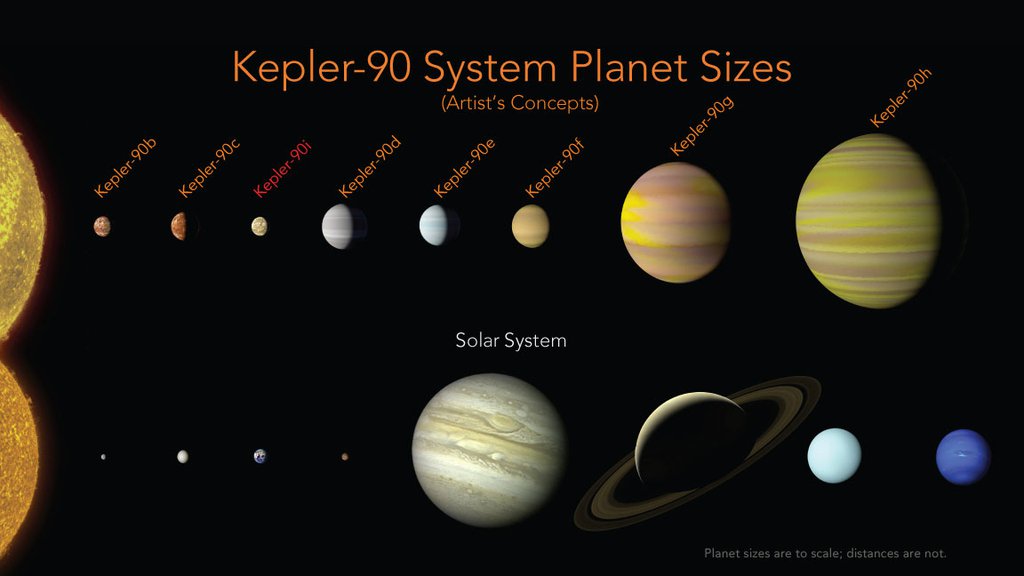 With the discovery of an eighth planet, the Kepler-90 system is the first to tie with our solar system in number of planets. Artist's concept compared with our own solar system.› Full image and caption
Credit: NASA/Ames Research Center/Wendy Stenzel

Our solar system now is tied for most number of planets around a single star, with the discovery of an eighth planet circling a Sun-like star 2,545 light years from Earth.

The newly-discovered Kepler-90i - a sizzling hot, rocky planet that orbits its star once every 14.4 days - was found using machine learning from Google. Machine learning is an approach to artificial intelligence in which computers "learn." In this case, computers learned to identify planets by finding in Kepler data instances where the telescope recorded changes in starlight caused by planets beyond our solar system, known as exoplanets.

NASA will host a Reddit Ask Me Anything at noon PST (3 p.m. EST) today on this discovery.

"Just as we expected, there are exciting discoveries lurking in our archived Kepler data, waiting for the right tool or technology to unearth them," said Paul Hertz, director of NASA's Astrophysics Division in Washington. "This finding shows that our data will be a treasure trove available to innovative researchers for years to come."

The discovery came about after researchers Christopher Shallue and Andrew Vanderburg trained a computer to learn how to identify exoplanets in the light readings recorded by Kepler - the miniscule change in brightness captured when a planet passed in front of, or transited, a star. Inspired by the way neurons connect in the human brain, this artificial "neural network" sifted through Kepler data and found weak transit signals from a previously-missed eighth planet orbiting Kepler-90, in the constellation Draco.

Machine learning has previously been used in searches of the Kepler database, and this continuing research demonstrates that neural networks are a promising tool in finding some of the weakest signals of distant worlds.

Other planetary systems probably hold more promise for life than Kepler-90. About 30 percent larger than Earth, Kepler-90i is so close to its star that its average surface temperature is believed to exceed 800 degrees Fahrenheit, on par with Mercury. Its outermost planet, Kepler-90h, orbits at a similar distance to its star as Earth does to the Sun.

"The Kepler-90 star system is like a mini version of our solar system. You have small planets inside and big planets outside, but everything is scrunched in much closer," said Vanderburg, a NASA Sagan Postdoctoral Fellow and astronomer at the University of Texas at Austin.

Shallue, a senior software engineer with Google's research team Google AI, came up with the idea to apply a neural network to Kepler data. He became interested in exoplanet discovery after learning that astronomy, like other branches of science, is rapidly being inundated with data as the technology for data collection from space advances.

"In my spare time, I started Googling for 'finding exoplanets with large data sets' and found out about the Kepler mission and the huge data set available," said Shallue. "Machine learning really shines in situations where there is so much data that humans can't search it for themselves."

Kepler's four-year dataset consists of 35,000 possible planetary signals. Automated tests, and sometimes human eyes, are used to verify the most promising signals in the data. However, the weakest signals often are missed using these methods. Shallue and Vanderburg thought there could be more interesting exoplanet discoveries faintly lurking in the data.

"We got lots of false positives of planets, but also potentially more real planets," said Vanderburg. "It's like sifting through rocks to find jewels. If you have a finer sieve then you will catch more rocks but you might catch more jewels, as well."

Kepler-90i wasn't the only jewel this neural network sifted out. In the Kepler-80 system, they found a sixth planet. This one, the Earth-sized Kepler-80g, and four of its neighboring planets form what is called a resonant chain - where planets are locked by their mutual gravity in a rhythmic orbital dance. The result is an extremely stable system, similar to the seven planets in the TRAPPIST-1 system.

Their research paper reporting these findings has been accepted for publication in The Astronomical Journal. Shallue and Vanderburg plan to apply their neural network to Kepler's full set of more than 150,000 stars.

Kepler has produced an unprecedented data set for exoplanet hunting. After gazing at one patch of space for four years, the spacecraft now is operating on an extended mission and switches its field of view every 80 days.

"These results demonstrate the enduring value of Kepler's mission," said Jessie Dotson, Kepler's project scientist at NASA's Ames Research Center in California's Silicon Valley. "New ways of looking at the data - such as this early-stage research to apply machine learning algorithms - promise to continue to yield significant advances in our understanding of planetary systems around other stars. I'm sure there are more firsts in the data waiting for people to find them."

Ames manages the Kepler and K2 missions for NASA's Science Mission Directorate in Washington. NASA's Jet Propulsion Laboratory in Pasadena, California, managed Kepler mission development. Ball Aerospace & Technologies Corporation operates the flight system with support from the Laboratory for Atmospheric and Space Physics at the University of Colorado in Boulder. This work was performed through the Carl Sagan Postdoctoral Fellowship Program executed by the NASA Exoplanet Science Institute.

For more information on this announcement, visit: