Are Water Plumes Spraying From Europa? NASA’s Europa Clipper Is on the Case 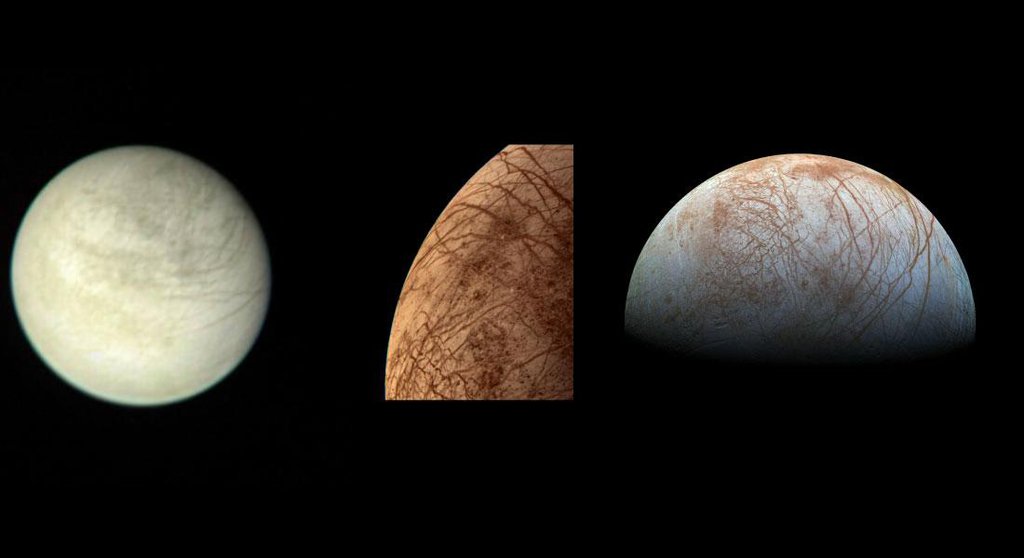 Finding plumes at Europa is an exciting prospect, but scientists warn it’ll be tricky, even from up close.

In 2005, images of a brilliant watery plume erupting from the surface of Saturn’s moon Enceladus captivated the world. The giant column of vapor, ice particles, and organic molecules spraying from the moon's south polar region suggested that there’s a liquid water ocean below Enceladus’ ice shell and confirmed the moon is geologically active. The plume also thrust Enceladus and other worlds in the outer solar system, with no atmospheres and far from the heat of the Sun, toward the top of NASA’s list of places to search for signs of life.

Scientists now are preparing for a mission to another ice-covered ocean world with possible plumes: Jupiter’s moon Europa. Scheduled to launch in 2024, NASA’s Europa Clipper spacecraft will study the moon from its deep interior to its surface to determine whether it has ingredients that make it a viable home for life. 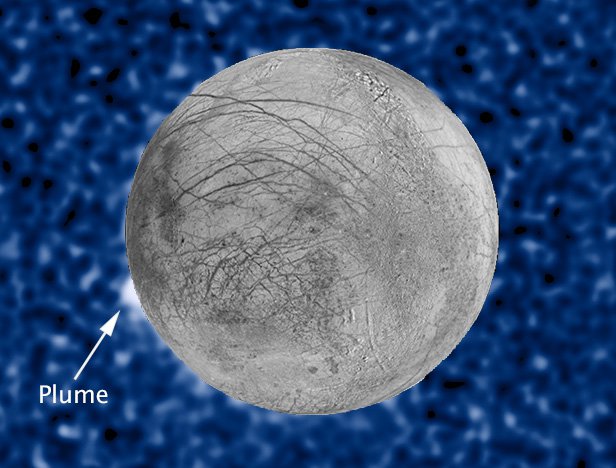 This composite image shows suspected plumes of water vapor erupting from Jupiter’s moon Europa. The image of the plume was made from data collected by NASA’s Hubble’s Space Telescope Imaging Spectrograph in 2014. The image of Europa itself is made from data from NASA’s Galileo and Voyager missions. Credit: NASA/ESA/W. Sparks (STScI)/USGS Astrogeology Science Center Full Image Details

Like Enceladus, Europa is geologically dynamic, meaning both ice-covered moons generate heat inside as their solid layers stretch and flex from the gravitational tug-of-war with their host planets and neighboring moons. This, instead of heat from the Sun, keeps subsurface water from freezing. The heat may also help produce or circulate life’s chemical building blocks at their seafloors, including carbon, hydrogen, oxygen, nitrogen, phosphorus, and sulfur.

But that’s where the similarities end.

“A lot of people think Europa is going to be Enceladus 2.0, with plumes constantly spraying from the surface,” said Lynnae Quick, a member of the science team behind Clipper’s Europa Imaging System (EIS) cameras. “But we can’t look at it that way; Europa is a totally different beast,” said Quick, who’s based at NASA’s Goddard Space Flight Center in Greenbelt, Maryland.

But no one is certain. “We’re still in the space where there’s really intriguing evidence, but none of it is a slam dunk,” said Matthew McKay Hedman, a member of Europa Clipper’s Mapping Imaging Spectrometer for Europa (MISE) science team and associate professor in the Department of Physics at the University of Idaho. 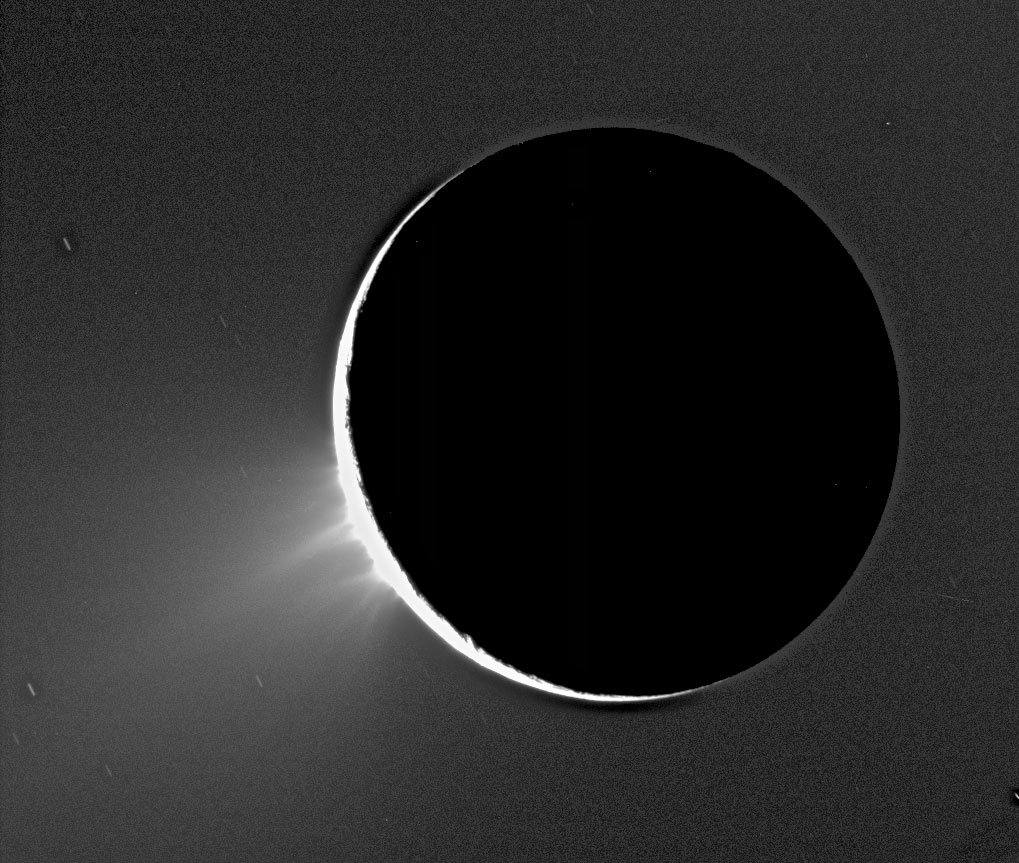 This image of the water jets at Saturn’s moon Enceladus was captured by NASA’s Cassini spacecraft on Nov. 27, 2005. Enceladus is backlit by the Sun. Credit: NASA/JPL-Caltech/Space Science Institute Full Image Details

Scientists are drawn to plumes for a couple of reasons. First, they’re undeniably cool: “We’re scientists, but we’re also human,” said Shawn Brooks, who is working with Europa Clipper’s Europa Ultraviolet Spectrograph (Europa-UVS) science team and is based at NASA’s Jet Propulsion Laboratory in Southern California.

But more practically, Brooks said, plumes offer scientists easier access to Europa’s interior. “It all comes down to whether Europa is habitable, and that comes down to having some understanding of what is happening below the surface, which we can’t reach yet,” he said.

In other words, the magic of Europa, an archetype for a potentially habitable world, is hidden from view deep within the moon. Compared to Enceladus, which is the size of Texas, Europa is about a quarter of Earth’s size, or a bit smaller than Earth’s moon. And evidence suggests Europa has a much deeper saltwater ocean than Enceladus, possibly 40 to 100 miles (about 60 to 160 kilometers) deep, which means it could contain about twice as much water as Earth’s oceans. Some scientists hypothesize that Europa’s ocean could be reacting with superheated rocks below its seafloor, possibly through hydrothermal vents. On Earth, such areas are hotbeds of chemical activity that nourishes innumerable creatures.

Scientists say there also could be large pockets of melted water in Europa’s ice shell, which are more likely than the ocean to be the source of plumes. These pockets could produce cozy habitats for organisms as well.

Because of Europa’s elliptical orbit, which sometimes brings it closer and sometimes farther away from Jupiter, plus Jupiter’s immense gravitational pull, more heat is generated in Europa from friction as it circles its host planet. Given that internal heat stimulates geological activity on rocky worlds, Europa is expected to have more extensive geology than Enceladus. Some scientists predict that Europa has plate tectonics that shift and recycle the icy blocks making up the moon’s surface. If so, Europa could be circulating nutrients produced on the surface by radiation from Jupiter, such as oxygen, to pockets of liquid in the ice shell or perhaps to the ocean itself. Through Europa Clipper, scientists will have a chance to test some of their predictions by analyzing the chemical makeup of plumes or the traces they may leave on the surface.

Scientists warn that Europan plumes, even if they’re there, could be hard to detect even from close-up. They may be sporadic, and they may be small and thin, given that Europa’s gravity, which is much stronger than Enceladus’, likely would keep these water plumes close to the surface. That’s a drastic departure from Enceladus’ spectacular vapor column: It’s always on and bigger than the moon itself, spraying icy particles hundreds of miles above the surface. “Even if they’re there, Europa’s plumes may not be that photogenic,” Hedman said.

Though Europa Clipper scientists are devising a variety of creative strategies to find active plumes when the spacecraft begins exploring Europa in 2031, they’re not relying on them to understand what’s going on inside the moon. “We don’t have to catch one for a successful mission,” Quick said.

Quick added that every instrument aboard Clipper can contribute evidence of habitable conditions below the surface, regardless of active plumes.

A few examples of how the science team will search for potential plumes include Europa Clipper’s camera suite, EIS. It will scout for plumes near Europa’s surface partly by looking for their silhouettes at Europa’s limb, or edge, when the moon is illuminated by the light of Jupiter as it passes in front of the planet. EIS will snap photos of plumes should they appear, as well as plume deposits that might be visible on the surface. The Europa-UVS will also strive to detect plumes in ultraviolet light, including at the edge of the moon when Europa passes in front of nearby stars, and can measure the chemical makeup of such plumes. A thermal camera, the Europa Thermal Emission Imaging System (E-THEMIS), will look for hotspots on the surface that may be evidence of active or recent eruptions.

The Europa Clipper team is set to succeed whether or not researchers find plumes at Europa, though many scientists hope for a spectacular water show to enrich the mission and our understanding of Europa. “I do suspect Europa is active and letting some material escape,” Hedman said. “But I expect that when we actually get to understand how it’s doing that, it’s not going to be what anyone expected.”