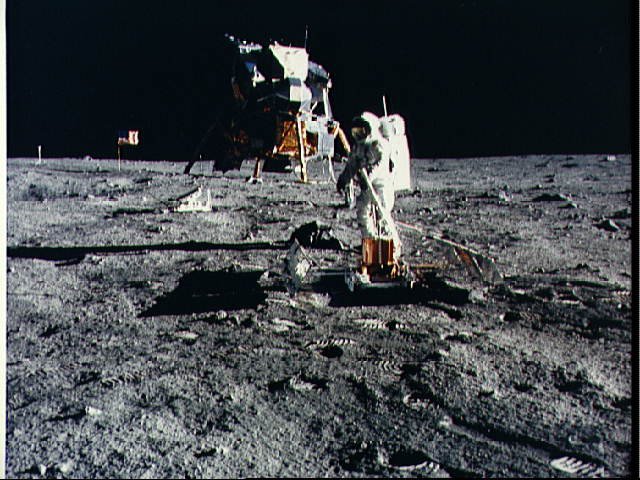 In the few hours that Aldrin and Armstrong were on the Moon, there was little time to set up scientific experiments, but a small package (the EASEP, or Early Apollo Scientific Experiments Package) was deployed. Aldrin is shown here setting up the Passive Seismic Experiments Package. Back to the left is the Laser Ranging Retro-Reflector. More extensive scientific studies were done on later Apollo missions. (NASA photo ID AS11-40-5949) 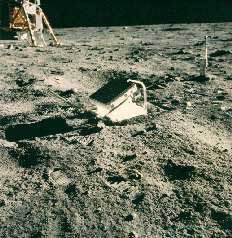 The Apollo 11 retroreflector array, consisting of 100 corner-cube prisms in a 10×10 array. Each corner cube is made of fused silica (quartz) and is 3.8 cm (1.5 inches) in diameter. 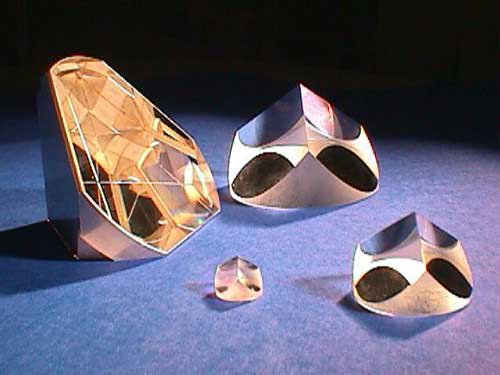 Retroreflectors, or corner-cube prisms, are optical devices that return any incident light back in exactly the direction from which it came. They make up part of the Apollo 11 lunar laser reflector array and can be found in automobile tail-light covers, bike reflectors and paints for road signs

On the afternoon of July 20, 1969, Apollo 11 astronauts Neil Armstrong and Edwin "Buzz" Aldrin explored the surface of the Moon for two and a half hours, collecting samples and taking photographs while Michael Collins orbited in the command module Columbia. On July 21, about an hour before the end of their final moonwalk, they left an experiment on the lunar surface which, after 35 years, continues to work as well as it did the day it got there. Called the lunar laser ranging experiment, it studies the Earth-Moon system and returns data to scientific centers around the world, including NASA's Jet Propulsion Laboratory.

"An accurate knowledge of the Moon's orbit and orientation is needed for future robotic and manned missions to our satellite," said Dr. James G. Williams, one of four JPL scientists who analyze the data from the Lunar Laser Ranging Experiment. "Scientists have been able to use the data they received through lunar laser ranging to study the Earth, the Moon and the character of gravity."

Scientists from various institutions who analyze the data from the lunar laser ranging experiment have observed, among other things, that the Moon is moving away from the Earth and has a fluid core, and that Einstein's Theory of Relativity is accurate.

The experiment consists of an instrument called the lunar laser ranging reflector, designed to reflect pulses of laser light fired from the Earth. The idea was to determine the round-trip travel time of a laser pulse from the Earth to the Moon and back again, thereby calculating the distance between the two bodies to unprecedented accuracy. Unlike the other scientific experiments left on the Moon, this reflector requires no power and is still functioning perfectly after 35 years.

The Apollo 11 laser reflector consists of 100 fused silica half cubes, called corner cubes, mounted in a 46-centimeter (18-inch) square aluminum panel. Each corner cube is 3.8 centimeters (1.5 inches) in diameter. Corner cubes reflect a beam of light directly back toward its point of origin; it is this fact that also makes them so useful in Earth surveying.

Three more reflectors have since been left on the Moon, including two by later Apollo 14 and 15 missions and one (built by the French) on the unmanned Soviet Lunokhod 2 rover. Each of the reflectors rests on the lunar surface in such a way that its flat face points toward the Earth.

The McDonald Observatory in Western Texas and a second observatory near the city of Grasse in southern France regularly send a laser beam through an optical telescope to hit one of the reflectors. The reflectors are too small to be seen from Earth, so even when the beam is correctly aligned in the telescope, actually hitting a lunar reflector is quite challenging. At the Moon's surface, the beam is a few kilometers or miles wide and scientists liken the task of properly aiming the beam to using a rifle to hit a moving dime 3.2 kilometers (two miles) away.

Once the laser beam hits a reflector, scientists at the observatories use sensitive filtering and amplification equipment to detect any return signal. The reflected light is too weak to be seen with the human eye, but under good conditions, one photon -- the fundamental particle of light -- will be received every few seconds.

The lunar laser ranging experiment is the only lunar investigation continuously operating since the Apollo project. Improvements in lasers and electronics over the years have led to measurements currently accurate to about 2 centimeters (less than one inch).

Scientists know the average distance between the centers of the Earth and the Moon is 385,000 kilometers (239,000 miles), implying that the modern lunar ranges have relative accuracies of better than one part in 10 billion. This level of accuracy represents one of the most precise distance measurements ever made and is equivalent to determining the distance between Los Angeles and New York to one hundredth of an inch.

"Technical improvements at the observatories rejuvenate the lunar laser ranging effort," Williams said. "When the range accuracy improves, it is like getting a new experiment on the Moon."

To this end, a new lunar ranging instrument with significantly improved accuracy is being constructed at Apache Point Observatory in New Mexico by the University of California at San Diego and the University of Washington.

"The usefulness of continued improvements in range determinations for further advancing our understanding of the Earth-Moon system will keep the lunar reflectors in service for years to come," Williams said.