Another First: Perseverance Captures the Sounds of Driving on Mars 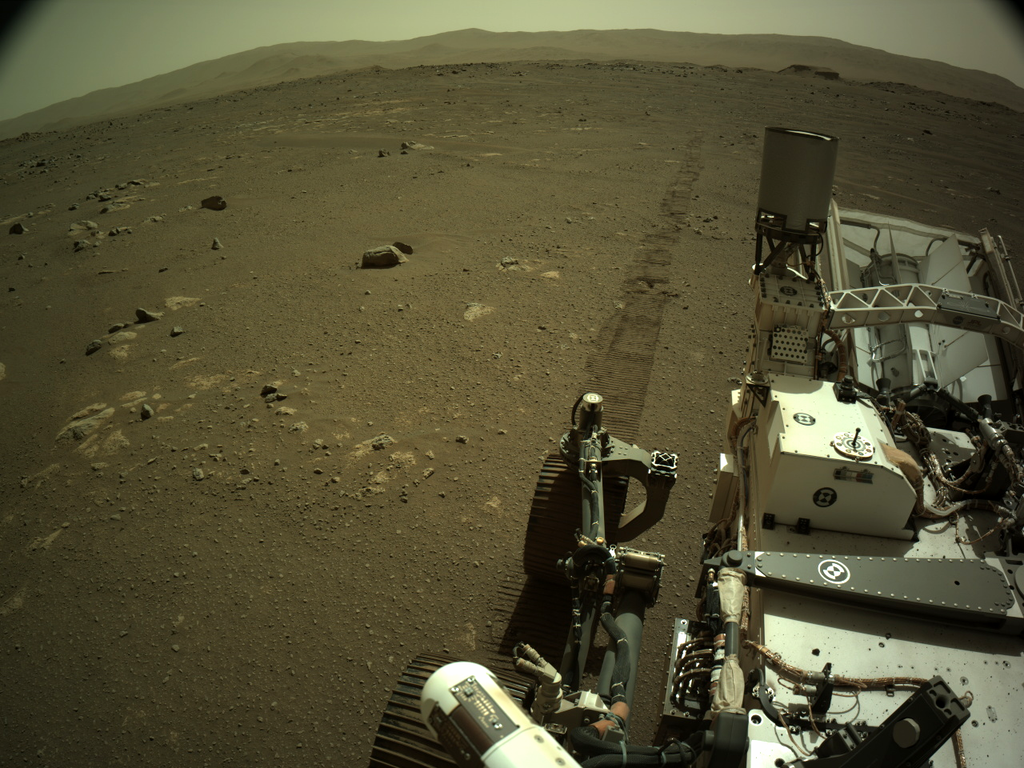 NASA’s Mars Perseverance rover acquired this image using its onboard left Navigation Camera (Navcam). The camera is located high on the rover’s mast and aids in driving. This image was acquired on Mar. 7, 2021 (Sol 16).

NASA’s newest rover recorded audio of itself crunching over the surface of the Red Planet, adding a whole new dimension to Mars exploration.

As the Perseverance rover began to make tracks on the surface of Mars, a sensitive microphone it carries scored a first: the bangs, pings, and rattles of the robot’s six wheels as they rolled over Martian terrain.

“A lot of people, when they see the images, don’t appreciate that the wheels are metal,” said Vandi Verma, a senior engineer and rover driver at NASA’s Jet Propulsion Laboratory in Southern California. “When you’re driving with these wheels on rocks, it’s actually very noisy.”

More than 16 minutes of sounds from Perseverance’s 90-foot (27.3-meter) drive on March 7 were captured by Perseverance’s entry, descent, and landing (EDL) microphone, which remains operational on the rover after its historic touchdown on Feb. 18. The off-the-shelf microphone was added to the rover to help take the public along for the ride during touchdown, but mission members have been eager to hear the sounds from the surface, too.

“If I heard these sounds driving my car, I’d pull over and call for a tow,” said Dave Gruel, lead engineer for Mars 2020’s EDL Camera and Microphone subsystem. “But if you take a minute to consider what you’re hearing and where it was recorded, it makes perfect sense.”

Two versions of the audio clip of the same drive were released to the public on March 17. The first version features over 16 minutes of raw, unfiltered sounds of the rover traveling in Jezero Crater. In it, the noise generated by the interaction of Perseverance’s mobility system (its wheels and suspension) with the surface can be heard, along with a high-pitched scratching noise. Perseverance’s engineering team continues to evaluate the source of the scratching noise, which may either be electromagnetic interference from one of the rover’s electronics boxes or interactions between the mobility system and the Martian surface. The EDL microphone was not intended for surface operations and had limited testing in this configuration before launch.

Listen to 16 minutes of raw, unfiltered sounds of the Perseverance Mars rover traveling in Jezero Crater. The noise generated by the interaction of the rover’s wheels and suspension with the surface can be heard, along with a high-pitched scratching noise. Perseverance’s engineering team continues to evaluate the source of the scratching noise, which may either be electromagnetic interference from one of the rover’s electronics boxes or interactions between the rover mobility system and the Martian surface. The entry, descent, and landing microphone was not intended for surface operations and had limited testing in this configuration before launch.

The second version is a shorter compilation of sounds from the longer raw recording of the drive. For this 90-second version, NASA engineers combined three segments from the raw audio file (sections 0:20-0:45, 6:40-7:10, and 14:30-15:00), processing and editing them to filter out some of the noise.

NASA engineers combined three segments from the raw audio file recorded while the Perseverance Mars rover rolled across a section of Jezero Crater on sol 16 of the mission. Sections 0:20-0:45, 6:40-7:10, and 14:30-15:00 were combined into this 90-second highlight clip. There has been processing and editing to filter out some of the noise.

This first audio of a drive across the Martian surface joins a growing playlist of Mars sounds beamed back to Earth from Perseverance. A second microphone, part of the rover’s SuperCam instrument, previously picked up the sighing of Martian wind and the rapid ticking sound of the instrument’s laser zapping rocks to reveal details of their structure and composition. Such information will help scientists as they search Jezero Crater for signs of ancient microscopic life, taking samples of rock and sediment to be returned to Earth by future missions.

The SuperCam sounds were part of a series of systems checks the rover has gone through, ranging from the unstowing of Perseverance’s massive robotic arm to making its first weather observations using the Mars Environmental Dynamics Analyzer.

The rover has also been searching for a suitable airfield for the Ingenuity Mars Helicopter to attempt its first flight tests. Now that the right spot has been found, the Perseverance and Ingenuity teams are making plans for the rover to deploy the helicopter, which will have 30 Martian days, or sols (31 Earth days), to complete up to five test flights.

And then the hunt for ancient life will begin in earnest, with Perseverance exploring terrain once thought to be covered with water. Between the rover’s 19 cameras and its two microphones, the experience will be packed with sights and sounds. For Verma, who has helped “drive” NASA’s last four Mars rovers, planning their routes and transmitting instructions so they can take a day’s drive across uncharted terrain, the audio is more than just cool.