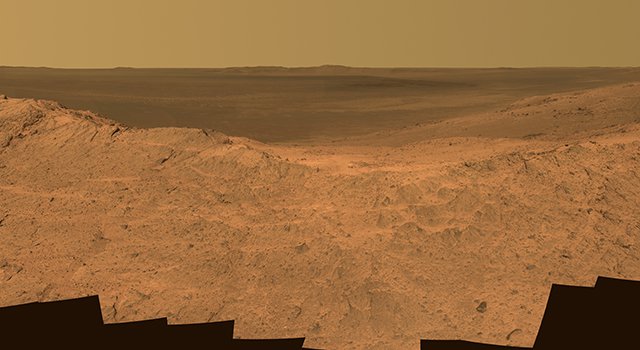 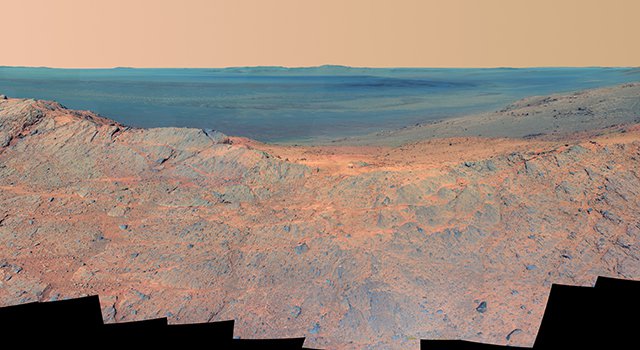 This May 14, 2014, scene from the Pancam on NASA's Mars Exploration Rover Opportunity catches "Pillinger Point," on the western rim of Endeavour Crater, in the foreground and the crater's eastern rim on the horizon.› Full image and caption
Credit: NASA/JPL-Caltech/Cornell Univ./Arizona State Univ. 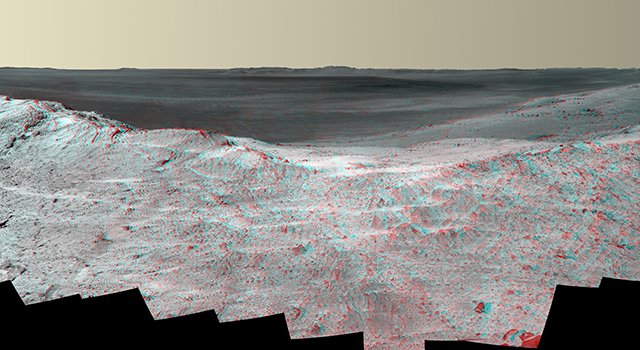 NASA's Mars Exploration Rover Opportunity is examining a rocky, windswept ridge where aluminum in a clay mineral was mapped from orbit.

With its solar panels their cleanest in years, NASA's decade-old Mars Exploration Rover Opportunity is inspecting a section of crater-rim ridgeline chosen as a priority target due to evidence of a water-related mineral.

Orbital observations of the site by another NASA spacecraft, Mars Reconnaissance Orbiter, found a spectrum with the signature of aluminum bound to oxygen and hydrogen. Researchers regard that signature as a marker for a mineral called montmorillonite, which is in a class of clay minerals called smectites. Montmorillonite forms when basalt is altered under wet and slightly acidic conditions. The exposure of it extends about 800 feet (about 240 meters) north to south on the western rim of Endeavour Crater, as mapped by the orbiter's Compact Reconnaissance Imaging Spectrometer for Mars (CRISM).

Some of the most important findings from Opportunity's long mission came from combining CRISM and rover observations of a site about 2 miles (3 kilometers) farther north on the crater's western rim. Rocks exposed there contain evidence for an iron-bearing smectite - called nontronite -- as well as for montmorillonite. That site yielded evidence for an ancient environment with water that would have been well-suited for use by microbes, if Mars had any billions of years ago.

Evidence that Opportunity may add about the geological context for different smectites could boost understanding about diversity and changes in ancient wet environments on Mars.

Opportunity reached the northern end of the montmorillonite-bearing exposure last month, at a high spot called "Pillinger Point." Opportunity's international science team chose that informal name in honor of Colin Pillinger (1943-2014). Pillinger was the British principal investigator for the Beagle 2 project, which attempted to set a research lander on Mars a few weeks before Opportunity's January 2004 landing.

"Colin and his team were trying to get to Mars at the same time that we were, and in some ways they faced even greater challenges than we did," Squyres said. "Our team has always had enormous respect for the energy and enthusiasm with which Colin Pillinger undertook the Beagle 2 mission. He will be missed."

Though selected as a science destination, Pillinger Point also offers a scenic vista from atop the western rim of Endeavour Crater, which is about 14 miles (22 kilometers) in diameter.

A color view of Pillinger Point from the rover's panoramic camera (Pancam) is available at:

Initial measurements at this site with the element-identifying alpha particle X-ray spectrometer at the end of Opportunity's arm indicate that bright-toned veins in the rock contain calcium sulfate. Scientists deduce this mineral was deposited as water moved through fractures on Endeavour's rim. The rover earlier found veins of calcium sulfate farther north along the rim.

As Opportunity investigates this site and sites farther south along the rim, the rover has more energy than usual.

"The solar panels have not been this clean since the first year of the mission," said Opportunity Project Manager John Callas of NASA's Jet Propulsion Laboratory, Pasadena, California. "It's amazing, when you consider that accumulation of dust on the solar panels was originally expected to cause the end of the mission in less than a year. Now it's as if we'd been a ship out at sea for 10 years and just picked up new provisions at a port of call, topping off our supplies."

Both Opportunity and its rover twin, Spirit, benefited from sporadic dust-cleaning events in past years. However, on the ridge that Opportunity has been navigating since late 2013, winds have removed dust more steadily, day by day, than either rover has experienced elsewhere.

"It's easy to forget that Opportunity is in the middle of a Martian winter right now," said JPL's Jennifer Herman, power-subsystem engineer. "Because of the clean solar arrays, clear skies and favorable tilt, there is more energy for operations now than there was any time during the previous three Martian summers. Opportunity is now able to pull scientific all-nighters for three nights in a row -- something she hasn't had the energy to do in years."

The rover's signs of aging -- including a stiff shoulder joint and occasional amnesia events -- have not grown more troublesome in the past year, and no new symptoms have appeared.

During Opportunity's first decade on Mars and the 2004-2010 career of Spirit, NASA's Mars Exploration Rover Project yielded a range of findings about wet environmental conditions on ancient Mars -- some very acidic, others milder and more conducive to supporting life.