All Eyes on Hurricane Michael 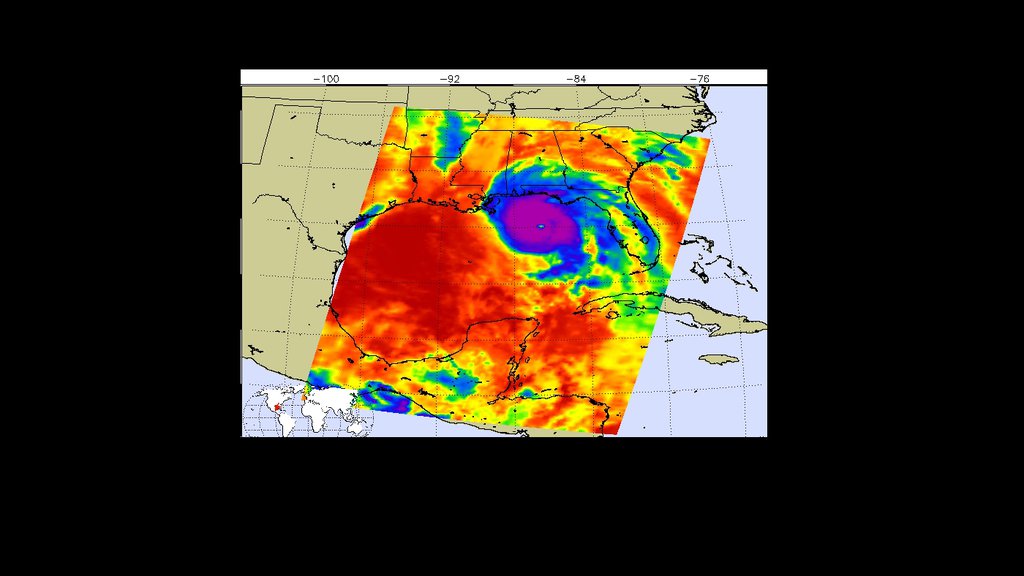 This AIRs image shows the temperature of clouds or the surface in and around Hurricane Michael. Purple represents very cold clouds, the much warmer eye is shown in green, and the red areas are warmer and mostly cloud-free.› Full image and caption
Credit: NASA/JPL-Caltech 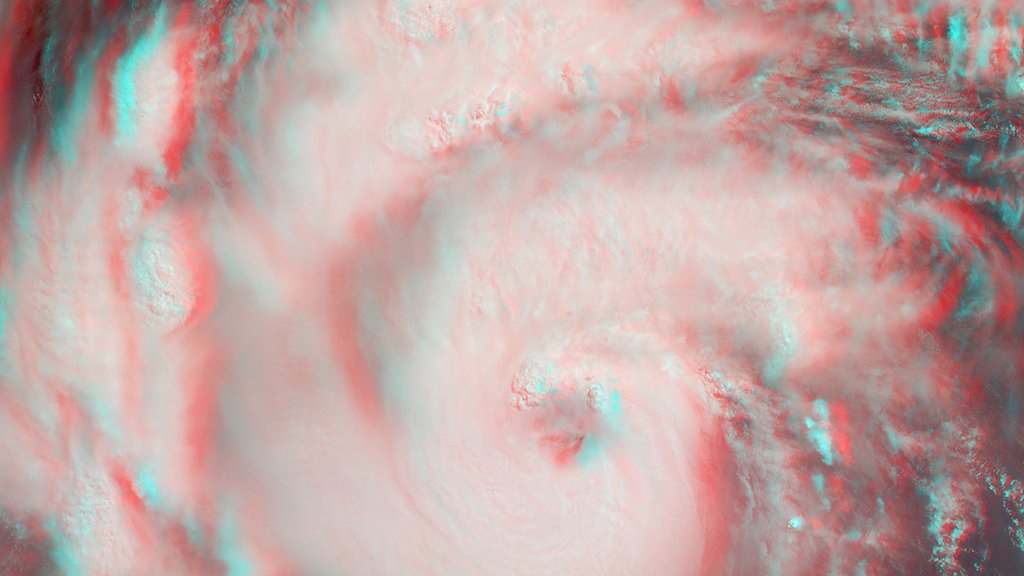 MISR's stereo anaglyph shows a three-dimensional view of Michael and combines two of MISR's nine camera angles. Using 3D red-blue glasses, you can see the 3D effect. Apparent in the 3D stereo anaglyph as well as the height field are a number of bright "clumps." These are groups of strong thunderstorms embedded within the larger circulation of the hurricane.› Full image and caption
Credit: NASA/GSFC/LaRC/JPL-Caltech, MISR Team 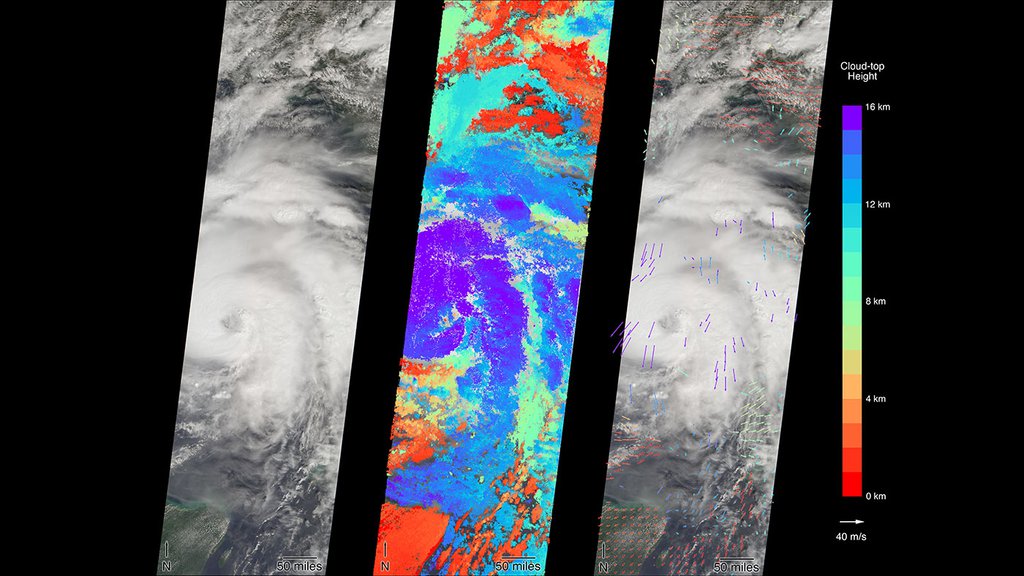 MISR carries nine cameras fixed at different angles, each of which viewed Michael over the course of approximately seven minutes when it was just off Florida's west coast on Tuesday, October 9.› Full image and caption
Credit: NASA/GSFC/LaRC/JPL-Caltech, MISR Team

Many NASA instruments are keeping tabs on Hurricane Michael from space, including AIRS and MISR. Here's what they've seen.

Hurricane Michael plowed into the Florida panhandle Wednesday, Oct. 10, as a major Category 4 storm -- the strongest hurricane ever to hit that region. Many NASA instruments are keeping tabs on Michael from space, including the Atmospheric Infrared Sounder (AIRS) and the Multi-angle Imaging SpectroRadiometer (MISR).

The first image, taken by AIRS, shows Hurricane Michael just off the west coast of Florida on Oct. 10 in the early morning hours local time. The large purple area indicates very cold clouds at about -90°F (-68°C) carried high into the atmosphere by deep thunderstorms. These storm clouds are associated with heavy rainfall. The eye, which is much warmer than the surrounding clouds, appears in green. The red areas moving away from the storm indicate temperatures of around 60°F (15°C), typical of the surface of Earth at night. These red areas are mostly cloud-free.

MISR carries nine cameras fixed at different angles, each of which viewed Michael over the course of approximately seven minutes when it was just off Florida's west coast on Tuesday, Oct. 9.

Images from the nine views are used to calculate the height of the cloud tops, and the motion of the clouds between the views provides information on wind speed and direction. This first MISR image shows the view from the central, downward-pointing camera (left), the calculated cloud-top heights (middle) and wind velocity arrows (right) superimposed on top. The length of the arrows is proportional to wind speed, and the colors show the altitude of the cloud tops in kilometers.

MISR's stereo anaglyph shows a three-dimensional view of Michael that combines two of MISR's camera angles. Using 3D red-blue glasses, you can see a number of bright "clumps." These clumps, called "vortical hot towers," are groups of strong thunderstorms embedded in the larger circulation of the hurricane. They indicate the rapid transport of heat energy from the ocean surface into the storm and usually occur when a hurricane intensifies quickly.

The National Hurricane Center clocked Michael's sustained wind speed at 150 mph (240 kph) just before noon local time on Wednesday, Oct. 10. It is expected to bring strong winds, storm surges and heavy rainfall to much of the southeast.

AIRS, in conjunction with the Advanced Microwave Sounding Unit (AMSU), senses emitted infrared and microwave radiation from Earth to provide a three-dimensional look at Earth's weather and climate. Working in tandem, the two instruments make simultaneous observations down to Earth's surface, even in the presence of heavy clouds. With more than 2,000 channels sensing different regions of the atmosphere, the system creates a global, three-dimensional map of atmospheric temperature and humidity, cloud amounts and heights, greenhouse gas concentrations, and many other atmospheric phenomena. Launched into Earth orbit in 2002, the AIRS and AMSU instruments fly onboard NASA's Aqua spacecraft and are managed by NASA's Jet Propulsion Laboratory, a division of Caltech, in Pasadena, California.

MISR was built and is managed by JPL for NASA's Science Mission Directorate in Washington. The instrument flies aboard the Terra satellite, which is managed by NASA's Goddard Space Flight Center in Greenbelt, Maryland. The MISR data were obtained from the NASA Langley Research Center Atmospheric Science Data Center in Hampton, Virginia.