Additional Details on the Large Feb. 15 Fireball over Russia 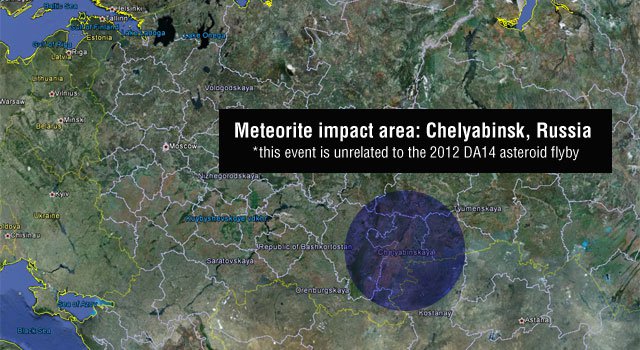 A meteor seen flying over Russia on Feb. 15 at 3:20: 26 UTC impacted Chelyabinsk. Preliminary information is that this object was unrelated to asteroid 2012 DA14, which made a safe pass by Earth today.
Credit: Google Earth, NASA/JPL-Caltech

New data fill in some gaps in the story of a fireball that entered Earth's atmosphere near Chelyabinsk, Russia, on Feb. 15.

The large fireball (technically, called a "superbolide") observed on the morning of Feb. 15, 2013, in the skies near Chelyabinsk, Russia, was caused by a relatively small asteroid approximately 17 to 20 meters in size (about 18.6 to 21.9 yards) that entered Earth's atmosphere at high speed and at a shallow angle. In doing so, it released a tremendous amount of energy, fragmented at high altitude, and produced a shower of pieces of various sizes that fell to the ground as meteorites.

The fireball was observed not only by video cameras and low-frequency infrasound detectors, but also by U.S. government sensors. Information on the composition of the meteor was also derived from meteorite fragments found in the Chelyabinsk area. With this new data incorporated, the details of the impact have become clearer.

At 9:20:20 a.m. local time (3:20:20 UTC) the meteor entered Earth's atmosphere over the Kazakhstan/Russia border. As it descended through the upper atmosphere, it traveled northwest into Russia. The impactor's trajectory approached Earth along a direction that remained within 15 degrees of the direction of the sun. Asteroid detection telescopes cannot scan regions of the sky this close to the sun.

During the atmospheric entry phase, an impacting object is both slowed and heated by atmospheric friction. In front of it, a bow shock develops where atmospheric gases are compressed and heated. Some of this energy is radiated to the object, causing it to ablate, and in most cases, break apart. Fragmentation increases the amount of atmosphere intercepted and so enhances ablation and atmospheric braking. The object disintegrates when the force from the unequal pressures on the front and back sides exceeds its tensile strength. This disruption, or disintegration, usually occurs around the time of maximum brightness.

Thirteen seconds after atmospheric entry, at 9:20:33 a.m. local time (03:20:33 UTC), the fireball, traveling at a velocity of 11.6 miles per second (18.6 kilometers per second), achieved its maximum brightness just south of Chelyabinsk, Russia, at an altitude of 14.5 miles (23.3 kilometers). The approximate effective diameter of the asteroid is estimated to be about 18 meters (about 19.7 yards), and its mass about 11,000 tons. Approximate total impact energy of the Chelyabinsk Fireball, in kilotons of TNT explosives (the energy parameter usually quoted for a fireball), is 440 kilotons. Note that these estimates of total energy, diameter and mass are very approximate. The Chelyabinsk event was an extraordinarily large fireball, the most energetic impact event recognized since the 1908 Tunguska blast in Russian Siberia.

The U.S. government sensor data also provides an approximate path for the Chelyabinsk impactor. A similar calculation can be made from analysis of video records of the event; both methods yield similar results. This path through the atmosphere reinforces that the fireball was not associated with asteroid 2012 DA14, which made a very close flyby of Earth just over 16 hours later. This is known because the two objects approached the Earth from completely different directions and had entirely different orbits around the sun. And, their compositions are dissimilar. The meteorite fragments emanating from the fireball are reportedly composed of silicate-rich ordinary chondrites, whereas the telescopic spectral data of asteroid 2012 DA14 suggest a carbon-dominated composition with abundant calcium- and aluminum-rich inclusions.

New information provided by a worldwide network of sensors has allowed scientists to refine their estimates for the size of the object that entered that atmosphere and disintegrated in the skies over Chelyabinsk, Russia, at 7:20:26 p.m. PST, or 10:20:26 p.m. EST on Feb. 14 (3:20:26 UTC on Feb. 15).

The estimated size of the object, prior to entering Earth's atmosphere, has been revised upward from 49 feet (15 meters) to 55 feet (17 meters), and its estimated mass has increased from 7,000 to 10,000 tons. Also, the estimate for energy released during the event has increased by 30 kilotons to nearly 500 kilotons of energy released. These new estimates were generated using new data that had been collected by five additional infrasound stations located around the world - the first recording of the event being in Alaska, over 6,500 kilometers away from Chelyabinsk. The infrasound data indicates that the event, from atmospheric entry to the meteor's airborne disintegration took 32.5 seconds. The calculations using the infrasound data were performed by Peter Brown at the University of Western Ontario, Canada.

"We would expect an event of this magnitude to occur once every 100 years on average," said Paul Chodas of NASA's Near-Earth Object Program Office at the Jet Propulsion Laboratory in Pasadena, Calif. "When you have a fireball of this size we would expect a large number of meteorites to reach the surface and in this case there were probably some large ones."

Preliminary information indicates that a meteor in Chelyabinsk, Russia, is not related to asteroid 2012 DA14, which is flying by Earth safely today.

Based on the duration of the event, it was a very shallow entry. It was larger than the meteor over Indonesia on Oct. 8, 2009. Measurements are still coming in, and a more precise measure of the energy may be available later. The size of the object before hitting the atmosphere was about 49 feet (15 meters) and had a mass of about 7,000 tons.

The meteor, which was about one-third the diameter of asteroid 2012 DA14, was brighter than the sun. Its trail was visible for about 30 seconds, so it was a grazing impact through the atmosphere.

It is important to note that this estimate is preliminary, and may be revised as more data is obtained.