A Year of Surprising Science From NASA's InSight Mars Mission 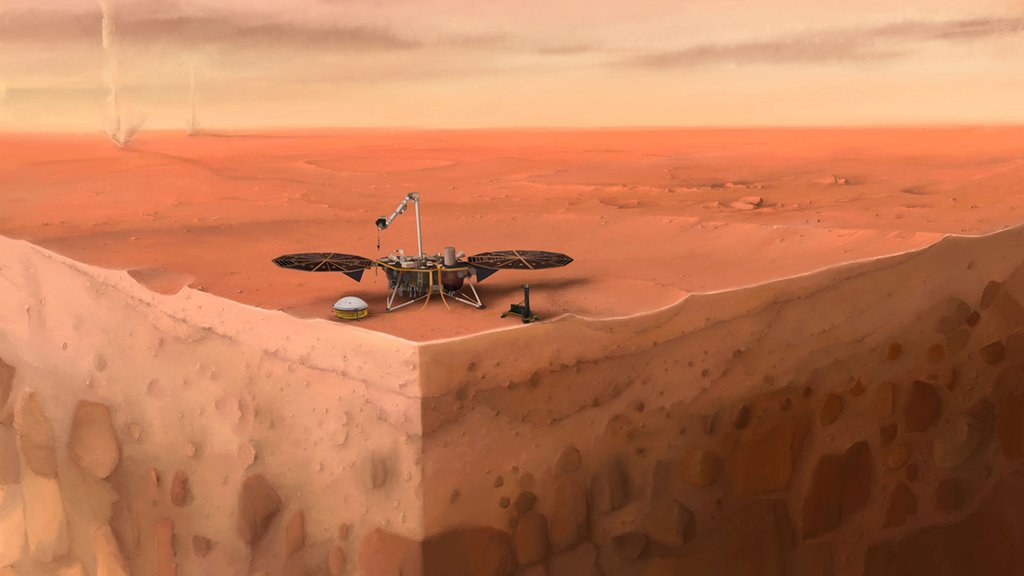 In this artist's concept of NASA's InSight lander on Mars, layers of the planet's subsurface can be seen below and dust devils can be seen in the background.
Credit: IPGP/Nicolas Sarter 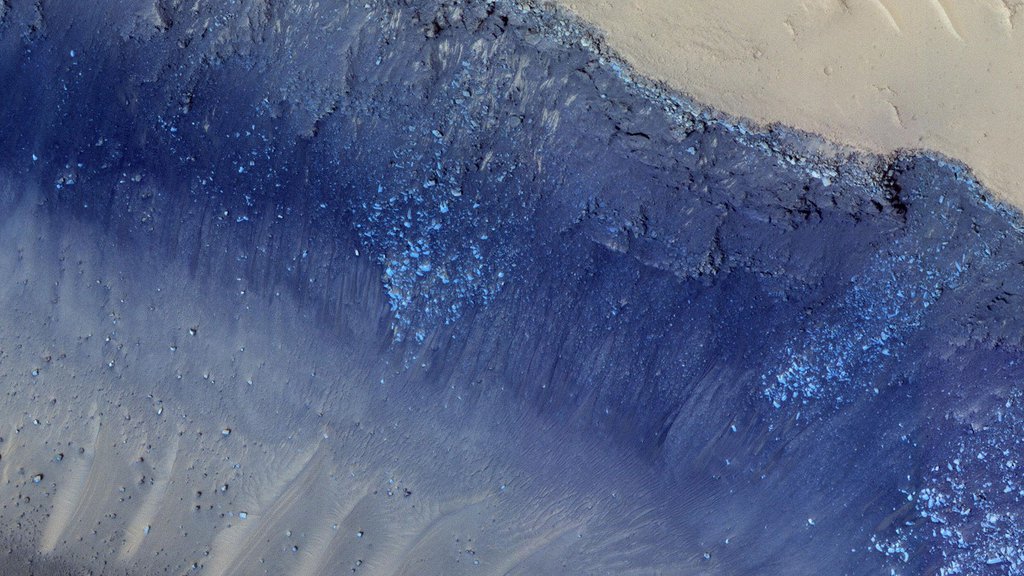 The two largest quakes detected by NASA's InSight appear to have originated in a region of Mars called Cerberus Fossae. Scientists previously spotted signs of tectonic activity here, including landslides. This image was taken by the HiRISE camera on NASA's Mars Reconnaisance Orbiter.
Credit: NASA/JPL-Caltech/University of Arizona

A batch of new papers summarizes the lander's findings above and below the surface of the Red Planet.

A new understanding of Mars is beginning to emerge, thanks to the first year of NASA's InSight lander mission. Findings described in a set of six papers published today reveal a planet alive with quakes, dust devils and strange magnetic pulses.

Five of the papers were published in Nature. An additional paper in Nature Geoscience details the InSight spacecraft's landing site, a shallow crater nicknamed "Homestead hollow" in a region called Elysium Planitia.

InSight is the first mission dedicated to looking deep beneath the Martian surface. Among its science tools are a seismometer for detecting quakes, sensors for gauging wind and air pressure, a magnetometer, and a heat flow probe designed to take the planet's temperature. 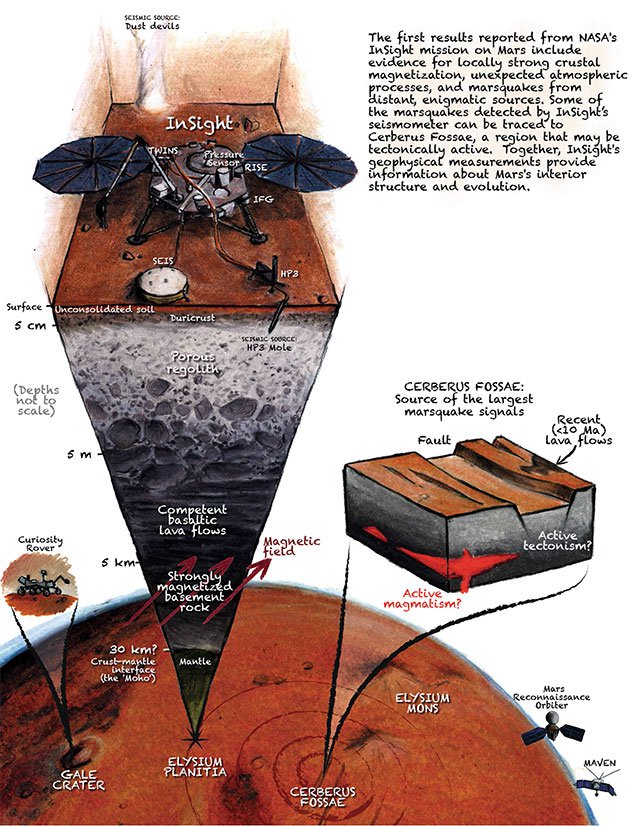 While the team continues to work on getting the probe into the Martian surface as intended, the ultra-sensitive seismometer, called the Seismic Experiment for Interior Structure (SEIS), has enabled scientists to "hear" multiple trembling events from hundreds to thousands of miles away.

Seismic waves are affected by the materials they move through, giving scientists a way to study the composition of the planet's inner structure. Mars can help the team better understand how all rocky planets, including Earth, first formed.

Mars trembles more often - but also more mildly - than expected. SEIS has found more than 450 seismic signals to date, the vast majority of which are probably quakes (as opposed to data noise created by environmental factors, like wind). The largest quake was about magnitude 4.0 in size - not quite large enough to travel down below the crust into the planet's lower mantle and core. Those are "the juiciest parts of the apple" when it comes to studying the planet's inner structure, said Bruce Banerdt, InSight principal investigator at JPL.

Scientists are ready for more: It took months after InSight's landing in November 2018 before they recorded the first seismic event. By the end of 2019, SEIS was detecting about two seismic signals a day, suggesting that InSight just happened to touch down at a particularly quiet time. Scientists still have their fingers crossed for "the Big One."

Mars doesn't have tectonic plates like Earth, but it does have volcanically active regions that can cause rumbles. A pair of quakes was strongly linked to one such region, Cerberus Fossae, where scientists see boulders that may have been shaken down cliffsides. Ancient floods there carved channels nearly 800 miles (1,300 kilometers) long. Lava flows then seeped into those channels within the past 10 million years - the blink of an eye in geologic time.

Some of these young lava flows show signs of having been fractured by quakes less than 2 million years ago. "It's just about the youngest tectonic feature on the planet," said planetary geologist Matt Golombek of JPL. "The fact that we're seeing evidence of shaking in this region isn't a surprise, but it's very cool."

Billions of years ago, Mars had a magnetic field. It is no longer present, but it left ghosts behind, magnetizing ancient rocks that are now between 200 feet (61 meters) to several miles below ground. InSight is equipped with a magnetometer - the first on the surface of Mars to detect magnetic signals.

The magnetometer has found that the signals at Homestead hollow are 10 times stronger than what was predicted based on data from orbiting spacecraft that study the area. The measurements of these orbiters are averaged over a couple of hundred miles, whereas InSight's measurements are more local.

Because most surface rocks at InSight's location are too young to have been magnetized by the planet's former field, "this magnetism must be coming from ancient rocks underground," said Catherine Johnson, a planetary scientist at the University of British Columbia and the Planetary Science Institute. "We're combining these data with what we know from seismology and geology to understand the magnetized layers below InSight. How strong or deep would they have to be for us to detect this field?"

In addition, scientists are intrigued by how these signals change over time. The measurements vary by day and night; they also tend to pulse around midnight. Theories are still being formed as to what causes such changes, but one possibility is that they're related to the solar wind interacting with the Martian atmosphere.

InSight measures wind speed, direction and air pressure nearly continuously, offering more data than previous landed missions. The spacecraft's weather sensors have detected thousands of passing whirlwinds, which are called dust devils when they pick up grit and become visible. "This site has more whirlwinds than any other place we've landed on Mars while carrying weather sensors," said Aymeric Spiga, an atmospheric scientist at Sorbonne University in Paris.

Despite all that activity and frequent imaging, InSight's cameras have yet to see dust devils. But SEIS can feel these whirlwinds pulling on the surface like a giant vacuum cleaner. "Whirlwinds are perfect for subsurface seismic exploration," said Philippe Lognonné of Institut de Physique du Globe de Paris (IPGP), principal investigator of SEIS.

Still to Come: The Core

InSight has two radios: one for regularly sending and receiving data, and a more powerful radio designed to measure the "wobble" of Mars as it spins. This X-band radio, also known as the Rotation and Interior Structure Experiment (RISE), can eventually reveal whether the planet's core is solid or liquid. A solid core would cause Mars to wobble less than a liquid one would.

This first year of data is just a start. Watching over a full Martian year (two Earth years) will give scientists a much better idea of the size and speed of the planet's wobble.

A division of Caltech in Pasadena, JPL manages InSight for NASA's Science Mission Directorate. InSight is part of NASA's Discovery Program, managed by the agency's Marshall Space Flight Center in Huntsville, Alabama. Lockheed Martin Space in Denver built the InSight spacecraft, including its cruise stage and lander, and supports spacecraft operations for the mission.