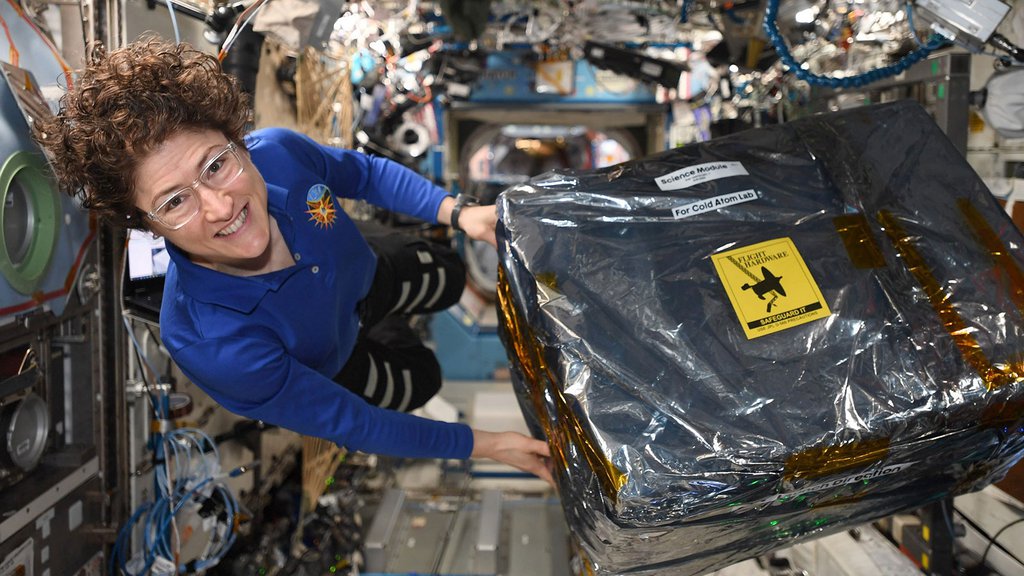 An ultracool physics experiment that takes advantage of the station's weightless environment is getting an upgrade.

Astronaut Christina Koch recently gave a warm welcome to a very cool arrival to the International Space Station: a new piece of hardware for the Cold Atom Lab, an experimental physics facility that chills atoms to almost absolute zero, or minus 459 degrees Fahrenheit (minus 273 degrees Celsius). That's colder than any known place in the universe.

The Cold Atom Lab has been up and running in the space station's science module since July 2018 and is operated remotely from NASA's Jet Propulsion Laboratory in Pasadena, California. Five groups of scientists on Earth are using the Cold Atom Lab to conduct a variety of experiments to help answer questions about how our world works at the smallest scales.

The new hardware includes an instrument called an atom interferometer that will allow scientists to make subtle measurements of gravity and probe fundamental theories of gravity. Further development of this technology in space could lead to improved inertial-force sensors, which could be used to design tools for enhanced spacecraft navigation, to probe the composition and topology of planets and other celestial bodies, and to study Earth's climate.

Chilling atoms to such low temperatures slows them down significantly, enabling scientists to study them more easily. (Room-temperature atoms move faster than the speed of sound, while ultracold atoms move slower than a garden snail.) Ultracold atom physics has led to breakthroughs such as the discovery of superfluidity and superconductivity, as well as the production of a fifth state of matter, called a Bose-Einstein Condensate (BEC). First predicted in the 1920s, BECs allow scientists to observe quantum behaviors of atoms on a macroscopic scale.

Physicists have been using ultracold atom facilities in Earth-bound labs for more than 20 years. But CAL is the first such facility in Earth orbit, where the microgravity environment provides scientists longer observing times for individual bunches of atoms and may allow for colder temperatures than what can be achieved on the ground.

Ultracold atoms also provide a window into quantum mechanics, where particles can behave in strange ways, such as spontaneously passing through physical barriers or communicating instantaneously over long distances. The study of quantum mechanics has led to the development of such ubiquitous technologies as lasers, semiconductors and transistors. By making the leap into Earth orbit, the Cold Atom Lab may open the door for the development of quantum technologies in space.

About the size of a mini refrigerator, the Cold Atom Lab will be equipped with the newly arrived hardware in 2020. Designed and built at NASA's Jet Propulsion Laboratory in Pasadena, California, the Cold Atom Lab was is sponsored by the International Space Station Program at NASA's Johnson Space Center in Houston, and the Space Life and Physical Sciences Research and Applications (SLPSRA) Division of NASA's Human Exploration and Operations Mission Directorate at NASA Headquarters in Washington.

For more information about the Cold Atom Lab, go here: