A 'Smoking Gun' for Dinosaur Extinction 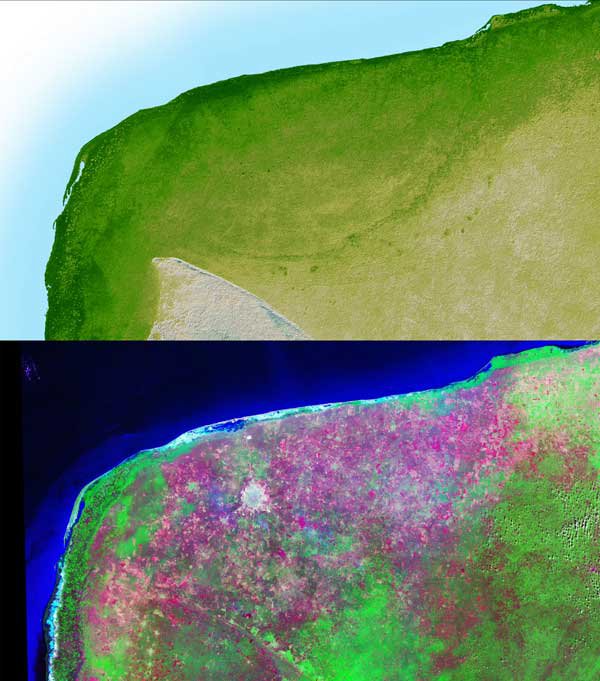 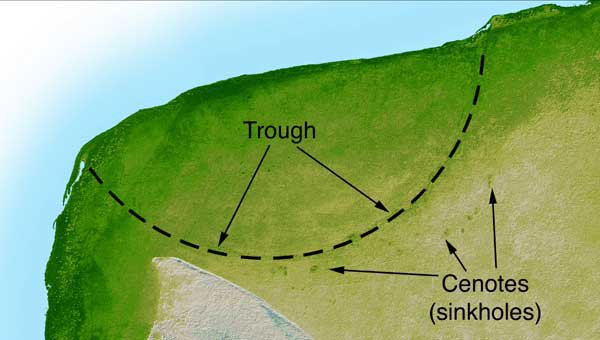 Chicxulub, located on Mexico's Yucatan peninsula, eluded detection for decades because it was hidden (and at the same time preserved) beneath a kilometer of younger rocks and sediments.

Chicxulub, located on Mexico's Yucatan peninsula, eluded detection for decades because it was hidden (and at the same time preserved) beneath a kilometer of younger rocks and sediments. Size isn't the only thing that makes Chicxulub special. Most scientists now agree it's the "smoking gun" -- evidence that a huge asteroid or comet indeed crashed into Earth's surface 65 million years ago causing the extinction of more than 70 percent of the living species on the planet, including the dinosaurs. This idea was first proposed by the father and son team of Luis and Walter Alvarez in 1980.

Though the buried giant can't be seen, the impact crater has left subtle clues of its existence on the surface. "When I talk to school children, I describe it like this," says Dr. Gary Kinsland, a geology professor at the University of Louisiana at Lafayette who has been doing research on Chicxulub since 1994. "Put a bowl on your bed, then throw the sheets and blankets over it. All you'll probably see of the bowl now is a subtle depression."

"There is not a big hole anymore," he continues, "but if you look at the rim of the depression on your bed, you'll see that it is still in the same position as the rim of the bowl beneath. That's how surface expression allows us to interpret something about the buried structure."

The view from space lets scientists see some of Chicxulub's surface features that are not nearly so obvious from the ground. Satellite images showing a necklace of sink holes, called cenotes, across the Yucatan's northern tip are what first caught the attention of NASA researchers Drs. Kevin Pope, Adriana Ocampo and Charles Duller in 1990. They were among the first to propose Chicxulub as the impact site linked to the mass extinctions that occurred at the end of the Cretaceous and beginning of the Tertiary geological ages, called the K/T boundary.

"We were ignorant of the existence of a crater," says Pope, now an independent geologist, "We were working on a project on surface water and Mayan archaeology when we saw this perfect semi-circular structure in images from the Landsat Thematic Mapper. "We were fascinated and got the magnetic and gravity data from the area collected earlier by the Mexican petroleum company, who had been looking for oil. Their data showed a large, remarkably circular structure that they had identified as an impact crater." Pope and his colleagues reasoned that the cenotes resulted from fractures in the buried crater's rim and that the area within the cenote ring corresponded with the crater's floor.

Further studies by other researchers of the magnetic and gravity data plus analysis of rocks and ocean sediments published in 1991 helped convince the scientific world that Chicxulub was the site of the impact that sent life on Earth in a new direction, from the age of dinosaurs to the age of mammals.

Scientists continue to comb through the clues the impact has left behind, some of which show up best from space. "The classic spaceborne synoptic view," says Pope, "is what you need to see a large structure like this." Maps of the region's wetlands, produced by the spaceborne imaging radar-C (SIR-C) mission in 1994, identified zones of groundwater discharge that correlate with the crater's structure.

Now researchers are getting their first look at detailed, three-dimensional topographical data from the Shuttle Radar Topography Mission. "This new image gives us both corroboration of what we expected and also shows up things we haven't seen before," says Kinsland. "We'll be working to get as much out of the data as possible. Anything we learn at the surface tells us more about the buried crater."

Much about Chicxulub remains mysterious. "We don't know exactly how the impact caused the mass extinctions," says Pope. "We believe it did, but we don't know what the "kill mechanism" was. One theory is that the impact threw up so much dust into the atmosphere than it obscured the Sun and stopped plants from growing. Another is that the sulfur released by the impact lead to global sulfuric acid clouds that also blocked the Sun and fell as acid rain. Global wild fires triggered by the atmospheric reentry of red-hot debris from the impact are another possibility.

Also unresolved is whether Chicxulub is the result of a collision with a comet or an asteroid. "There are arguments on both sides," says JPL's Dr. Don Yeomans, who manages NASA's Near-Earth Object Program Office. "There are far more asteroids in Earth's orbital vicinity than comets," says Yeomans, "but most are much smaller than the 10-kilometer size (6.2-mile) of the one that hit Chicxulub. When you get to that size range, then comets are about as prevalent. Most people say it was an asteroid, but it is still not altogether clear. Whatever it was, once you're hit with something that large, it's horrendous."