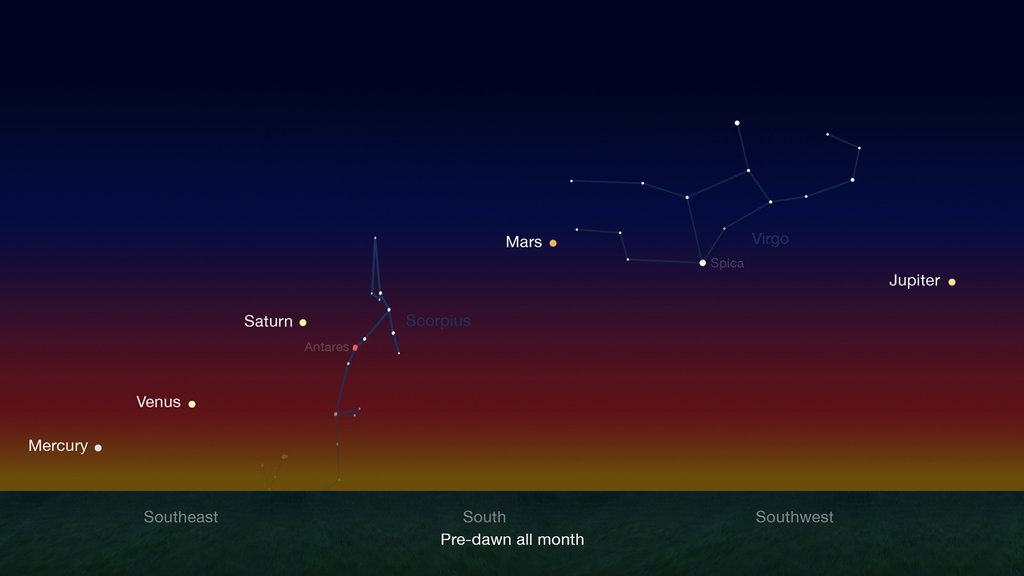 Early risers have an opportunity to see five naked-eye planets in pre-dawn skies during late January and continuing through late February.
Credit: NASA/JPL-Caltech

For the next month, early risers will have a chance to feast their eyes on a rare lineup of five planets.

"When the moon is in the seventh house, and Jupiter aligns with Mars, then peace will guide the planets, and love will steer the stars."

Well, it's not quite like the song about the dawning of the Age of Aquarius, but our solar system is experiencing an uncommon lineup that should be quite a treat for sky-watchers. The solar system itself hasn't changed -- it's just that the timing of the planets orbiting the sun puts them into a lineup that makes for good viewing by Earthlings.

From now until about Feb. 20, early risers will stand a good chance of seeing five planets simultaneously in the pre-dawn sky: Mercury, Venus, Saturn, Mars and Jupiter (technically six, if you count the Earth you're standing on). Those planets should be visible to the naked eye. Of course, if you happen to have binoculars or a telescope, you'll get an even better view.

The last appearance by the quintet on one nighttime stage was in December 2004 and January 2005. If you miss this month's viewing opportunity, the five will be back in the evening sky in late July through mid-August, but Mercury and Venus won't be easily visible from northern latitudes.

If you go outside during the five-planet display, and if weather conditions are favorable, here's what you should be able to see: Jupiter will rise in the evening, then Mars will pop up after midnight, followed by Saturn, brilliant Venus, and finally, Mercury. All five will be visible from southeast to southwest between 6 and 6:30 a.m. local time, over the span. Earth's moon will also join the cosmic display from Jan. 23 to Feb. 7. During that time, the moon will shift from the west-northwest to east-southeast and will be visible near the five planets and some stars.

During the day and night between Jan. 27 and 28, the morning view of the moon will switch from right of Jupiter to left of Jupiter. Then, on Feb. 1, the moon will be visible near Mars, followed by an appearance near Saturn on Feb. 3. On Feb. 6, the moon, Mercury and dazzling Venus will appear in a triangular formation before sunrise.

For Jim Green, director of NASA's Planetary Science Division, the rare planetary lineup reminds him how far we have come in exploring our solar system.

"NASA spacecraft have visited each one of the five planets that we will be able to see over the next few weeks, as well as Uranus, Neptune and Pluto," Green said. "We can be proud that American curiosity, technology and determination are helping us unlock many mysteries about our solar system."