NASA's Mars 2020 mission will have an autopilot that helps guide it to safer landings on the Red Planet.
Credit: NASA/JPL-Caltech 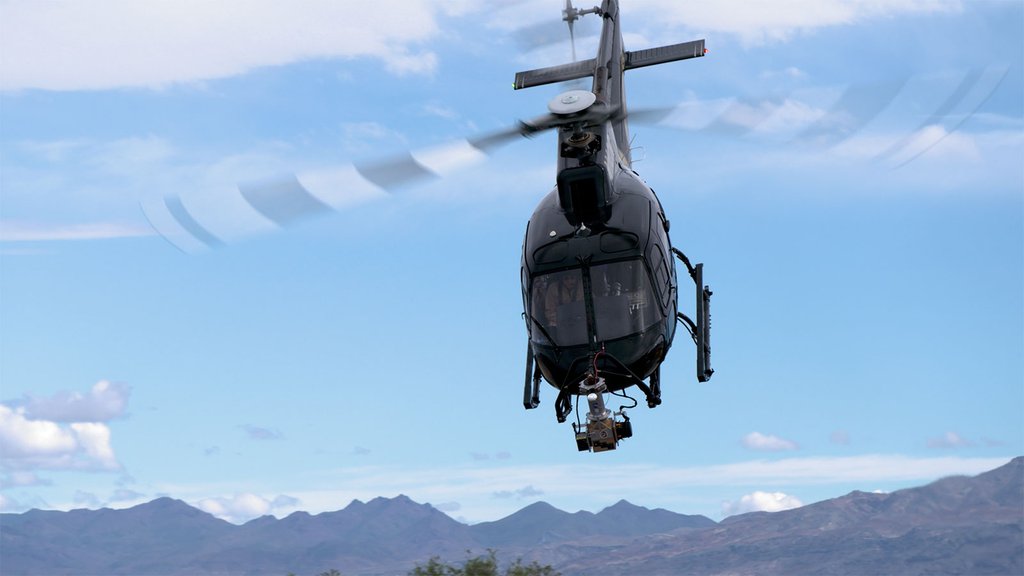 On a test flight in Death Valley, California, an Airbus helicopter carried an engineering model of the Lander Vision System (LVS) that will help guide NASA's next Mars mission to a safe touchdown on the Red Planet. During the flight - one in a series - the helicopter (which is not part of the mission and was used just for testing) and its two-person crew flew a pre-planned sequence of maneuvers while LVS collected and analyzed imagery of the barren, mountainous terrain below.
Credit: NASA/JPL-Caltech

NASA's newest rover will have an autopilot called Terrain-Relative Navigation.

The view of the Sea of Tranquility rising up to meet Neil Armstrong during the first astronaut landing on the Moon was not what Apollo 11 mission planners had intended. They had hoped to send the lunar module Eagle toward a relatively flat landing zone with few craters, rocks and boulders. Instead, peering through his small, triangular commander's window, Armstrong saw a boulder field - very unfriendly for a lunar module. So the Apollo 11 commander took control of the descent from the onboard computer, piloting Eagle well beyond the boulder field,to a landing site that will forever be known as Tranquility Base.

"There had been Moon landings with robotic spacecraft before Apollo 11," said Al Chen, entry, descent and landing lead for NASA's Mars 2020 mission at the Jet Propulsion Laboratory in Pasadena, California. "But never before had a spacecraft on a descent toward its surface changed its trajectory to maneuver out of harm's way."

The Mars 2020 mission is facing the most challenging landing yet on the Red Planet. It will touch down on Feb. 18, 2021, in Jezero Crater, a 28-mile-wide (45-kilometer-wide) expanse full of steep cliffs, boulder fields and other things that could boobytrap the landing. A new technology called Terrain Relative Navigation (TRN) will allow the spacecraft to avoid hazards autonomously. It's the closest thing to having an astronaut piloting the spacecraft, and the technology will benefit future robotic and human exploration of Mars.

Chen and his Mars 2020 colleagues have experience landing spacecraft on the Red Planet without the help of a steely-eyed astronaut at the stick. But Mars 2020 is headed toward NASA's biggest Martian challenge yet. Jezero Crater is a 28-mile-wide (45-kilometer-wide) indentation full of steep cliffsides, sand dunes, boulders fields and small impact craters. The team knew that to attempt a landing at Jezero - and with a rover carrying 50% more payload than the Curiosity rover, which landed at a more benign location near Mount Sharp - they would have to up their game.

"What we needed was a Neil Armstrong for Mars," said Chen. "What we came up with was Terrain-Relative Navigation."

Carried aboard Mars 2020, Terrain-Relative Navigation (TRN) is an autopilot that during landing can quickly figure out the spacecraft's location over - and more importantly, calculate its future location on - the Martian surface. Onboard, the rover's computer stores a map of hazards within Jezero Crater, and if the computed landing point is deemed too dangerous, TRN will command Mars 2020's descent stage to fly the rover to the safest reachable landing point.

To land an Apollo lunar module on the Moon required a crew of two (Armstrong had Buzz Aldrin feeding him information on their trajectory). Likewise, Terrain-Relative Navigation is actually two systems working together: the Lander Vision System and the Safe Target Selection system.

"The first half of Terrain-Relative Navigation is the Lander Vision System [LVS], which determines where the spacecraft is over the Martian surface," said Andrew Johnson, guidance navigation and control subsystem manager for Mars 2020. "If you say it quick - LVS - you'll understand why the team's unofficial mascot is Elvis Presley."

LVS's operational lifetime is all of 25 seconds. It comes alive at about 13,000 feet (3,960 meters), commanding a camera on the rover to quickly take picture after picture of the Martian surface while still descending on a parachute. LVS scrutinizes one image a second, breaking each into squares that cover about 5,000 feet (1,520 meters) of surface area.

However, unlike Neil Armstrong, LVS's real-time analysis isn't looking for specific crater rims or mountain peaks. Instead, inside each of those boxes, or landmarks, the system looks for unique patterns in contrasting light and dark created by surface features like cliffs, craters, boulder fields and mountains. It then compares any uncommon pattern with a map in its memory. When it finds five landmark matches during Coarse Landmark Matching mode, it takes another image and repeats the process.

After three successful image-to-map comparisons, LVS kicks into a mode called Fine Landmark Matching. That's when the system breaks the surface into boxes 410 feet (125 meters) across, scanning for unique patterns and comparing them with the map. LVS is looking for at least 20 matches in that one second of eyeballing an image but usually makes much more - up to 150 - in order to generate an even more accurate plot of Mars 2020's trajectory.

"Each time a suitable number of matches is made in an image, in either Course or Fine Landmark Matching, LVS updates where the spacecraft is at that moment," said Johnson. "That update is then fed into the Safe Target Selection system."

This second part of the Terrain-Relative Navigation system uses LVS's position solution, calculates where it will land and then compares it to another onboard map, this one depicting areas within the landing zone understood to be either good for landing ... or the kind with craters, cliffsides, boulders or rocks fields. If the plotted location isn't suitable, Safe Target Selection can change the rover's destiny, moving its landing point by up to 2,000 feet (600 meters).

Put to the Test

While Safe Target Selection operations can be investigated in a computer testbed within the confines of JPL, to gather optical data, the team needed to go farther afield: the Mojave Desert and Death Valley.

Over three weeks in April and May of 2019, LVS flew 17 flights attached to the front of a helicopter, taking and processing image after image over the Mars-like terrain of Kelso Dunes, Hole-in-the-Wall, Lava Tube, Badwater, Panamint Valley and Mesquite Flat Dunes.

"We flew flight after flight, imitating the descent profile of the spacecraft," said Johnson. "In each flight we performed multiple runs. Each run essentially imitated a Mars landing."

All in all, the equivalent of 659 Mars landings took place during the test flights.

"The data is in - TRN works," said Chen. "Which is a good thing because Jezero is where our scientists want to be. And without TRN, the odds of successful landing at a good location for the rover are approximately 85%. With TRN, we feel confident we are up around 99%."

But Chen is also quick to note that Mars is hard: Only about 40% of all missions sent to Mars - by any space agency - have successfully landed.

"To go farther we have to look to the past, and in that respect who better than the first?" said Chen. "In an interview some 35 years after Apollo 11, Neil Armstrong said, 'I think we tried very hard not to be overconfident. Because when you get overconfident, that's when something snaps up and bites you.'"

Mindful of that, the Mars 2020 TRN team's work will conclude only on Feb. 18, 2021, a little after 12 p.m. PST (3 p.m. EST), when their rover alights on Jezero Crater. But it is also just a beginning: Terrain-Relative Navigation's autonomous precision guidance could prove essential to landing humans safely on both the Moon and Mars.TRNcould also be useful for landing equipment in multiple drops ahead of a human crew on either world - or others to be explored down the road.