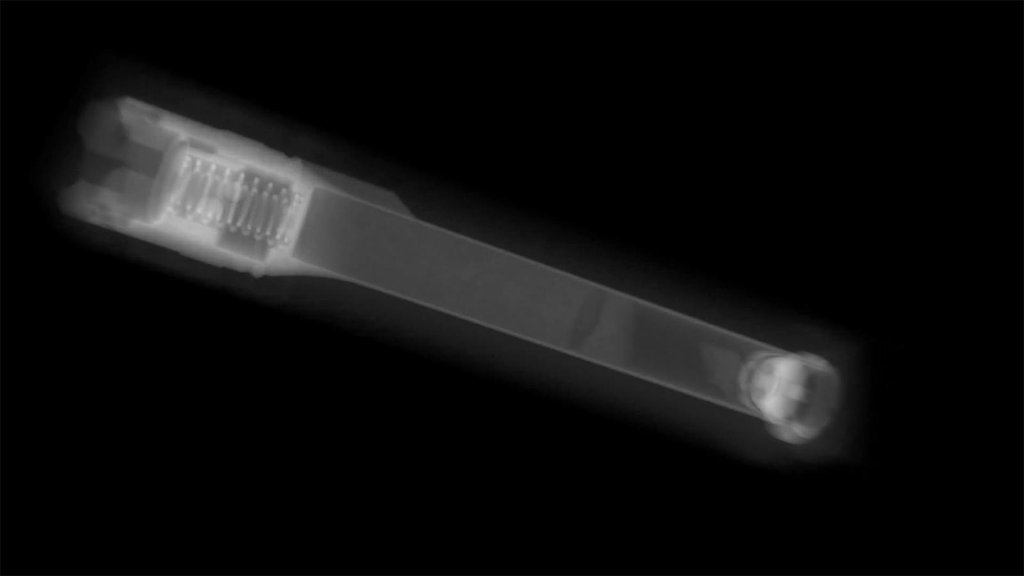 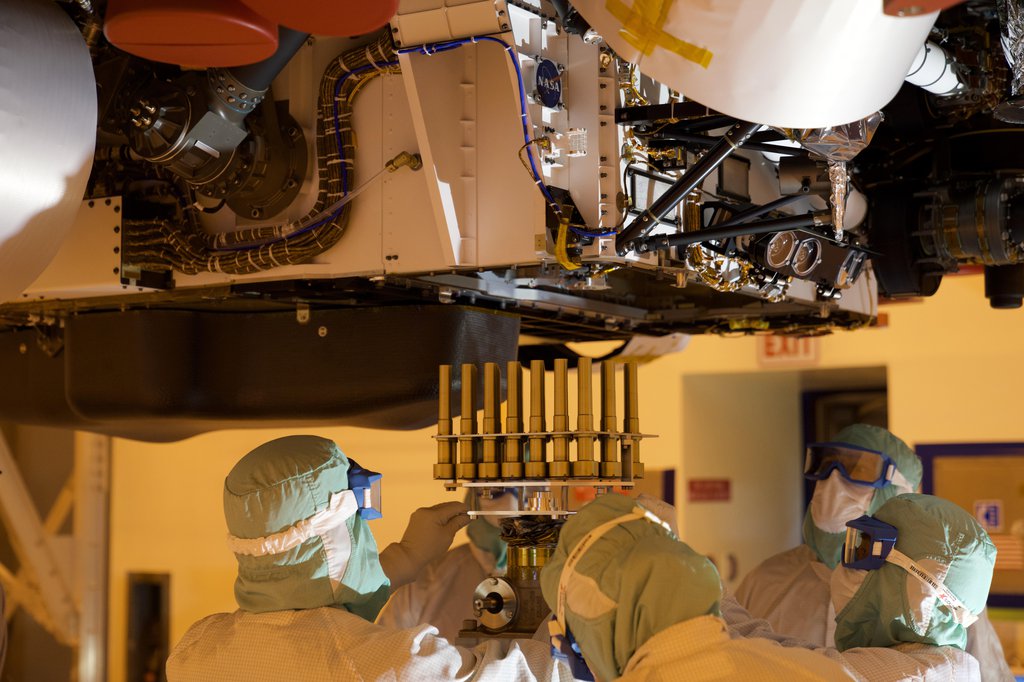 A tray holding 39 sample tubes, each protected in a gold-colored sheath, is installed in NASA's Perseverance rover in this picture taken at the agency's Kennedy Space Center on May 21, 2020.
Credit: NASA/JPL-Caltech/KSC
Full Image Details 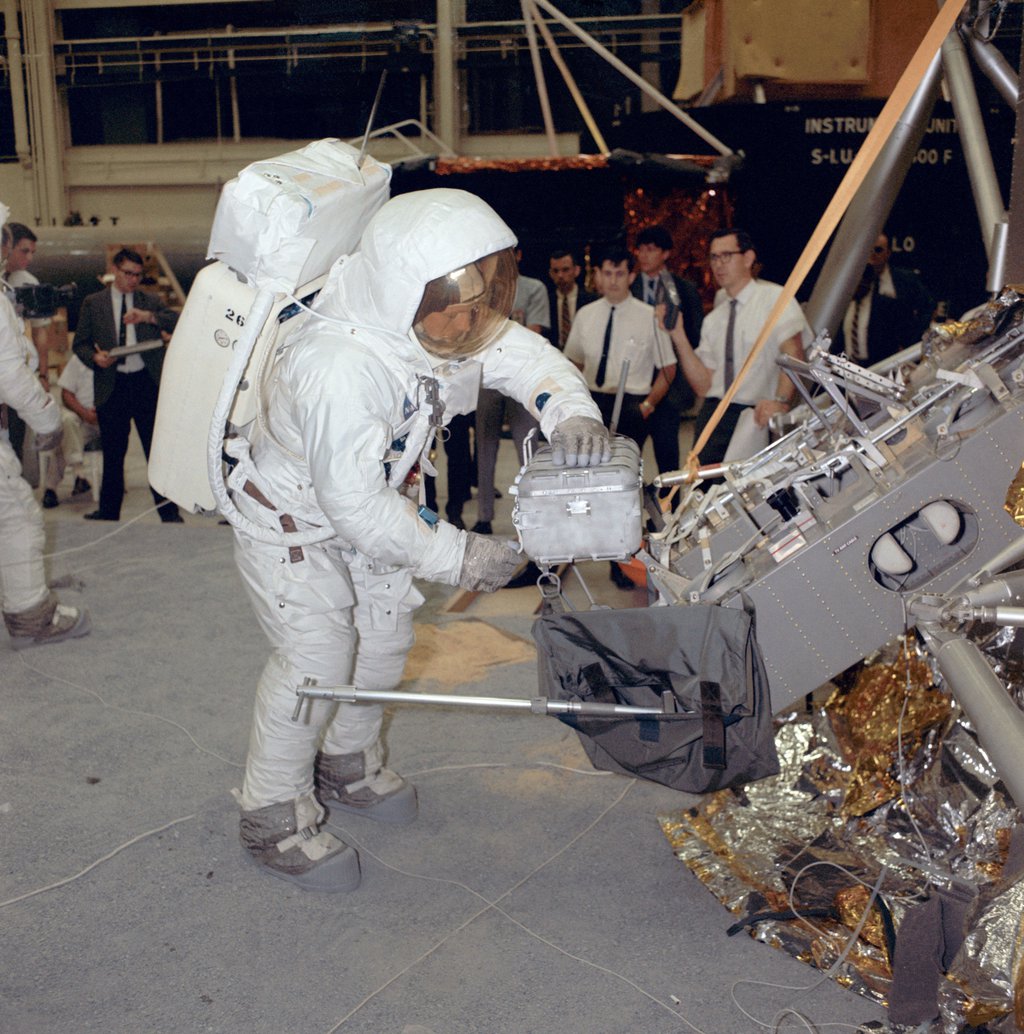 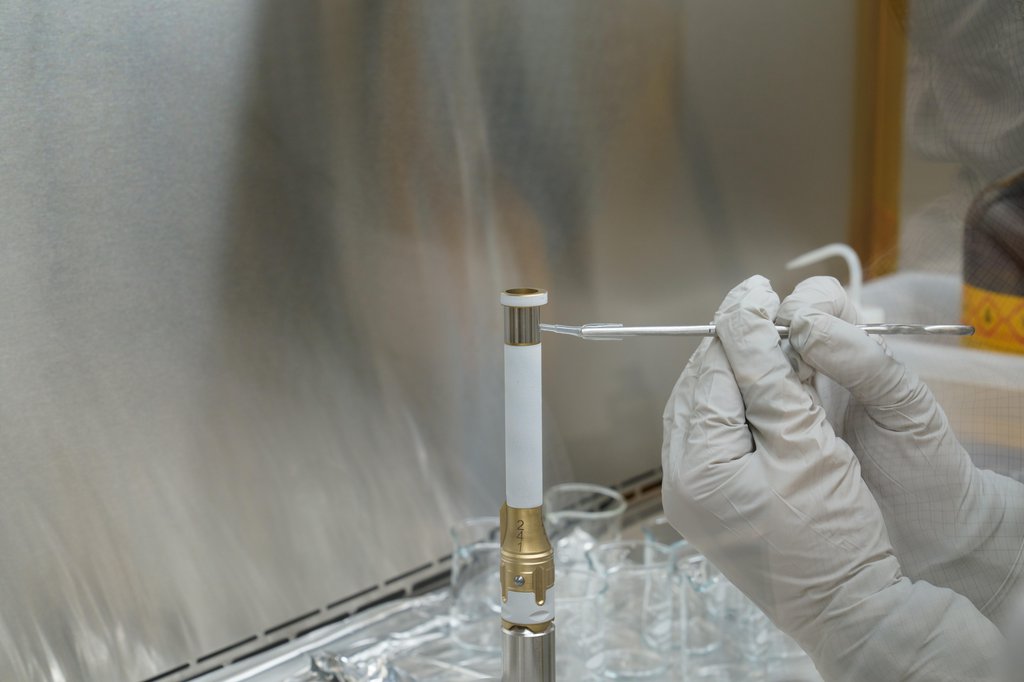 A technician working on the Mars 2020 mission takes a sample from the surface of sample tube 241, to test for contamination. The image was taken in a clean room facility at NASA's Jet Propulsion Laboratory, where the tubes were developed and assembled.
Credit: NASA/JPL-Caltech
Full Image Details

Marvels of engineering, the rover's sample tubes must be tough enough to safely bring Red Planet samples on the long journey back to Earth in immaculate condition.

The tubes carried in the belly of NASA's Mars 2020 Perseverance rover are destined to carry the first samples in history from another planet back to Earth. Future scientists will use these carefully selected representatives of Martian rock and regolith (broken rock and dust) to look for evidence of potential microbial life present in Mars' ancient past and to answer other key questions about Mars and its history. Perseverance will land at Mars' Jezero Crater on Feb. 18, 2021.

About the size and shape of a standard lab test tube, the 43 sample tubes headed to Mars must be lightweight and hardy enough to survive the demands of the round trip, and so clean that future scientists will be confident that what they're analyzing is 100% Mars.

"Compared to Mars, Earth is filled with evidence of the life that covers our planet," said Ken Farley, the Mars 2020 project scientist at Caltech in Pasadena. "We needed to remove those signs so thoroughly that any scant evidence remaining can be confidently detected and differentiated when these first samples are returned."

The practice of engineering containers to ferry samples from other worlds goes back to Apollo 11. When Neil Armstrong, Michael Collins, and Buzz Aldrin returned to Earth with 47.7 pounds (21.8 kilograms) of samples from the Moon's Sea of Tranquility in 1969, they carried them in two triple-sealed, briefcase-size aluminum boxes. But Apollo's rock boxes needed to keep their cargo pristine only for about 10 days - from the lunar surface to splashdown - before being whisked off to the Lunar Receiving Laboratory. Perseverance's sample tubes must isolate and preserve the scientific value of their contents for well over 10 years.

They made some of the cleanest things on Earth - all the better to hold samples of the Red Planet. This video explores the sample tubes of NASA's Mars 2020 Perseverance rover mission.

As NASA's newest rover investigates Jezero Crater, mission scientists will determine when and where it will drill for samples. This precious Martian cargo will be packaged in those tubes with the most intricate and technologically advanced mechanism ever sent into space: the Sample Caching System. After the samples have been deposited on the Martian surface, two other missions being formulated by NASA in partnership with ESA (the European Space Agency) will complete the relay to get them back to Earth.

The final mission will fly an orbiter to Mars to rendezvous with the encapsulated samples, capture them in a highly secure containment capsule, and ferry them back to Earth (as early as 2031).

Made chiefly of titanium, each sample tube weighs less than 2 ounces (57 grams). A white exterior coating guards against heating by the Sun potentially changing the chemical composition of the samples after Perseverance deposits the tubes on the surface of Mars. Laser-etched serial numbers on the exterior will help the team identify the tubes and their contents.

Each tube must fit within the tight tolerances not only of Perseverance's Sample Caching System, but those of the future missions.

"They are less than 6 inches [15.2 centimeters] long, but we still found over 60 different dimensions to scrutinize," said Sample Tube Cognizant Engineer Pavlina Karafillis of JPL. "Because of the intricacies of all the complex mechanisms they will pass through during the Mars Sample Return campaign, if any measurement was off by about the thickness of a human hair, the tube was deemed not suitable for flight."

Precision engineering is only part of the challenge. The tubes are also the product of extreme cleanliness standards. All of NASA's planetary missions involve exacting processes to prevent the introduction of Earthly organic, inorganic, and biological material. But since these tubes could hold proof that life once existed elsewhere in the universe, the Mars 2020 team needed to reduce - even further - the possibility that they could host Earthly artifacts that could complicate the scientific process. The mandate was essentially that nothing should be in a tube until the Sample Caching System begins filling it with 9 cubic inches (147 cubic centimeters) of Jezero Crater (about the size of a piece of chalk).

"And when they said 'nothing,' they meant it," said Ian Clark, the mission's assistant project systems engineer for sample tube cleanliness at JPL. "An example: To achieve the kind of science the mission is going after, we needed to limit the total amount of Earth-based organic compounds in a given sample to less than 150 nanograms. For a set of particular organic compounds - ones that are very indicative of life - we were limited to less than 15 nanograms in a sample."

A nanogram is a billionth of a gram. An average thumbprint carries about 45,000 nanograms of organics - about 300 times the total allowed in a sample tube. To meet such stringent mission specifications, the team had to rewrite the book on cleaning.

"We did all our assembly in a hyper-clean-room environment, which is essentially a clean room inside a clean room," said Clark. "Between assembly steps, the sample tubes would be cleaned with filtered air blasts, rinsed with deionized water, and sonically cleaned with acetone, isopropyl alcohol, and other exotic cleaning agents."

After each cleaning, the team would measure contaminants and bake the tubes for good measure. By the time the 43 sample tubes were selected from a field of 93 fabricated for flight, each had generated over 250 pages of documentation and 3 gigabytes of images and videos.

Of the tubes aboard Perseverance, up to 38 are destined to be filled with Martian rock and regolith. The other five are "witness tubes" that have been loaded with materials geared to capture molecular and particulate contaminants. They'll be opened one at a time on Mars to witness the ambient environment primarily near sample collection sites, cataloging any Earthly impurities or contaminants from the spacecraft that may be present during sample collection.

The sample and witness tubes' eventual return to and examination on Earth will allow the full breadth of terrestrial science laboratory capabilities to investigate the samples, using instruments too large and complex to send to Mars.