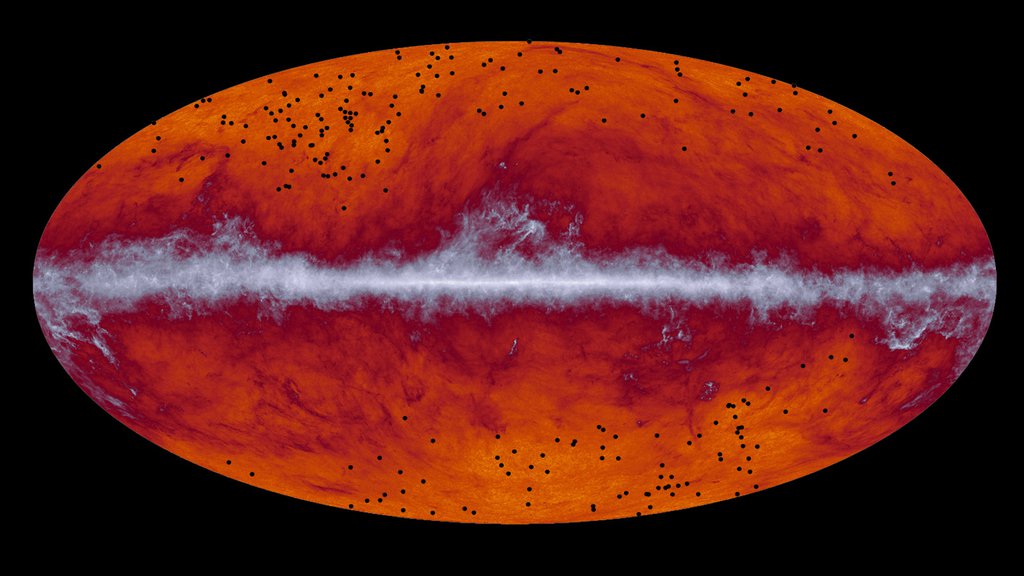 This map of the entire sky was captured by the European Space Agency's Planck mission. The band running through the middle corresponds to dust in our Milky Way galaxy. The black dots indicate the location of galaxy cluster candidates identified by Planck and subsequently observed by the European Space Agency's Herschel mission. Credits: ESA and the Planck Collaboration/ H. Dole, D. Guéry & G. Hurier, IAS/University Paris-Sud/CNRS/CNES

Astronomers mine data from the Planck and Herschel missions to find a treasure chest of galaxy clusters.

› Data from the Planck and Herschel space missions, led by the European Space Agency, have discovered one of the oldest and rarest clusters of galaxies known.

› Galaxy clusters are families of several galaxies bound together by gravity?

› The findings are helping astronomers fill in missing pieces in the history of galaxy cluster formation.

One telescope finds the treasure chest, and the other narrows in on the gold coins. Data from two European Space Telescope missions, Planck and Herschel, have together identified some of the oldest and rarest clusters of galaxies in the distant cosmos. Planck's all-sky images revealed the clumps of bright galaxies, while Herschel data allowed researchers to inspect the galactic gems more closely and confirm the discovery.

NASA played a key role in the Planck and Herschel missions. NASA's Jet Propulsion Laboratory in Pasadena, California, helped develop science instruments and process data for both missions, which ended, as planned, in 2013. The findings appear April 2 in the journal Astronomy and Astrophysics.

"Finding so many intensely star-forming, dust galaxies in such concentrated groups was a huge surprise," said Hervé Dole, lead author of the report from the Institut d'Astrophysique Spatiale in France. "We think this is a missing piece of cosmological structure formation."

Stars and galaxies sprung to life in the early universe, only later assembling into large clusters. Once the clusters formed, massive amounts of matter collapsed under the influence of gravity, triggering the formation of new stars and galaxies. Dark matter -- an enigmatic substance far outweighing "normal" matter in the universe -- was intermingled with the stars and galaxies, and helped usher along the process of creating stars. But how these large clusters were ultimately assembled and grew is still a mystery.

The new findings offer astronomers a portal back to this early time, about 10 to 11 billion light-years ago. About 200 candidate objects were identified, many of which were magnified by other galaxies lying in front of them via a process called gravitational lensing.

To find the galactic gems, the astronomers first mined the Planck all-sky maps, looking for the most luminous distant sources of light in the submillimeter-wavelength range. Herschel data, which sees submillimeter and far-infrared light, were then used to home in on the targets. The results showed that some of the objects were bright, young galaxies that had been gravitationally lensed, and others were clusters of galaxies churning out new stars.

According to the science team, there is still more treasure to dig up.

"Even when we combined the powerful capabilities of Planck and Herschel, we were only scratching the surface of the phenomena taking place at this critical era in the history of our universe, when stars, galaxies and clusters seem to be forming simultaneously," said George Helou, director of the Infrared Processing and Analysis Center at the California Institute of Technology in Pasadena. "That's one of the reasons this finding is exciting. It shows us that there is so much more to be learned."

The ESA news story is online at: http://www.esa.int/Our_Activities/Space_Science/Herschel_and_Planck_find_missing_clue_to_galaxy_cluster_formation .

More information about Planck is online at: