A Cosmic Baby Is Discovered, and It's Brilliant 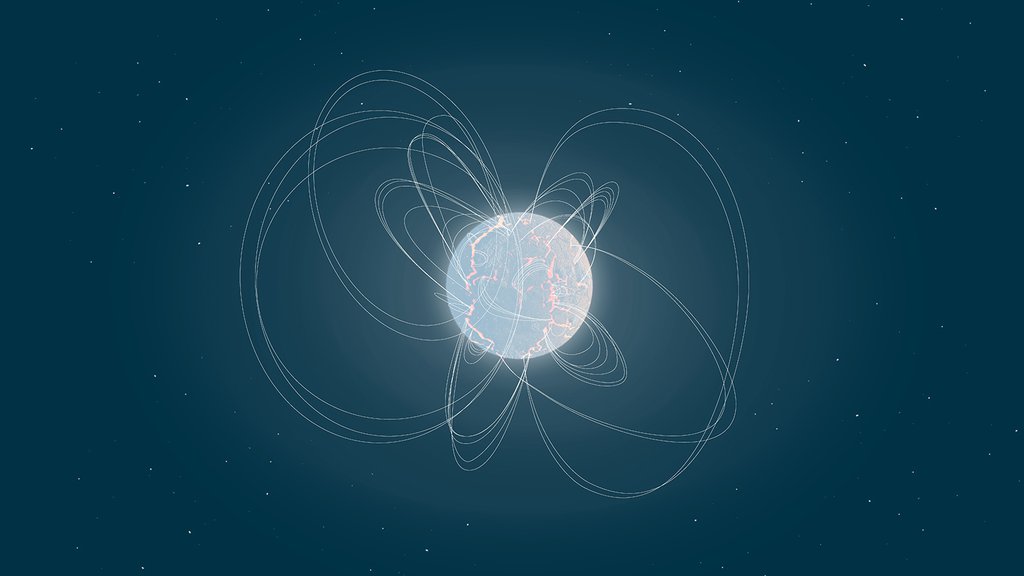 This illustration shows magnetic field lines protruding from a highly magnetic neutron star, or a dense nugget left over after a star goes supernova and explodes. Known as magnetars, these objects generate bright bursts of light that might be powered by their strong magnetic fields.
Credit: ESA

Born from an exploded star, the infant magnetar belongs to a family of extreme objects called neutron stars. Its discovery may lend insight into these strange phenomena.

Astronomers tend to have a slightly different sense of time than the rest of us. They regularly study events that happened millions or billions of years ago, and objects that have been around for just as long. That's partly why the recently discovered neutron star known as Swift J1818.0-1607 is remarkable: A new study in the journal Astrophysical Journal Letters estimates that it is only about 240 years old - a veritable newborn by cosmic standards.

NASA's Neil Gehrels Swift Observatory spotted the young object on March 12, when it released a massive burst of X-rays. Follow-up studies by the European Space Agency's XMM-Newton observatory and NASA's NuSTAR telescope, which is led by Caltech and managed by the agency's Jet Propulsion Laboratory, revealed more of the neutron star's physical characteristics, including those used to estimate its age.

A neutron star is an incredibly dense nugget of stellar material left over after a massive star goes supernova and explodes. In fact, they're some of the densest objects in the universe (second only to black holes): A teaspoon of neutron star material would weigh 4 billion tons on Earth. The atoms inside a neutron star are smashed together so tightly, they behave in ways not found anywhere else. Swift J1818.0-1607 packs twice the mass of our Sun into a volume more than one trillion times smaller.

With a magnetic field up to 1,000 times stronger than a typical neutron star - and about 100 million times stronger than the most powerful magnets made by humans - Swift J1818.0-1607 belongs to a special class of objects called magnetars, which are the most magnetic objects in the universe. And it appears to be the youngest magnetar ever discovered. If its age is confirmed, that means light from the stellar explosion that formed it would have reached Earth around the time that George Washington became the first president of the United States.

"This object is showing us an earlier time in a magnetar's life than we've ever seen before, very shortly after its formation," said Nanda Rea, a researcher at the Institute of Space Sciences in Barcelona and principal investigator on the observation campaigns by XMM Newton and NuSTAR (short for Nuclear Spectroscopic Telescope Array).

While there are over 3,000 known neutron stars, scientists have identified just 31 confirmed magnetars - including this newest entry. Because their physical properties can't be re-created on Earth, neutron stars (including magnetars) are natural laboratories for testing our understanding of the physical world.

"Maybe if we understand the formation story of these objects, we'll understand why there is such a huge difference between the number of magnetars we've found and the total number of known neutron stars," Rea said.

Swift J1818.0-1607 is located in the constellation Sagittarius and is relatively close to Earth - only about 16,000 light-years away. (Because light takes time to travel these cosmic distances, we are seeing light that the neutron star emitted about 16,000 years ago, when it was about 240 years old.) Many scientific models suggest that the physical properties and behaviors of magnetars change as they age and that magnetars may be most active when they are younger. So finding a younger sample close by like this will help refine those models.

Though neutron stars are only about 10 to 20 miles (15 to 30 kilometers) wide, they can emit huge bursts of light on par with those of much larger objects. Magnetars in particular have been linked to powerful eruptions bright enough to be seen clear across the universe. Considering the extreme physical characteristics of magnetars, scientists think there are multiple ways that they can generate such huge amounts of energy.

The Swift mission spotted Swift J1818.0-1607 when it began outbursting. In this phase, its X-ray emission became at least 10 times brighter than normal. Outbursting events vary in their specifics, but they usually begin with a sudden increase in brightness over the course of days or weeks that is followed by a gradual decline over months or years as the magnetar returns to its normal brightness.

That's why astronomers have to act fast if they want to observe the period of peak activity from one of these events. The Swift mission alerted the global astronomy community to the event, and XMM-Newton (which has NASA participation) and NuSTAR performed quick follow-up studies.

In addition to X-rays, magnetars have been known to release great bursts of gamma rays, the highest energy form of light in the universe. They can also emit steady beams of radio waves, the lowest energy form of light in the universe. (Neutron stars that emit long-lived radio beams are called radio pulsars; Swift J1818.0-1607 is one of five known magnetars that are also radio pulsars.)

"What's amazing about [magnetars] is they're quite diverse as a population," said Victoria Kaspi, director of the McGill Space Institute at McGill University in Montreal and a former member of the NuSTAR team, who was not involved with the study. "Each time you find one it's telling you a different story. They're very strange and very rare, and I don't think we've seen the full range of possibilities."

The new study was led by Paolo Esposito with the School for Advanced Studies (IUSS) in Pavia, Italy.

NuSTAR recently celebrated eight years in space, having launched on June 13, 2012. A Small Explorer mission led by Caltech and managed by JPL for NASA's Science Mission Directorate in Washington, NuSTAR was developed in partnership with the Danish Technical University and the Italian Space Agency (ASI). The spacecraft was built by Orbital Sciences Corp. in Dulles, Virginia. NuSTAR's mission operations center is at the University of California, Berkeley, and the official data archive is at NASA's High Energy Astrophysics Science Archive Research Center. ASI provides the mission's ground station and a mirror archive. Caltech manages JPL for NASA.

ESA's XMM-Newton observatory was launched in December 1999 from Kourou, French Guiana. NASA funded elements of the XMM-Newton instrument package and provides the NASA Guest Observer Facility at Goddard, which supports use of the observatory by U.S. astronomers.