A CADRE of Mini-Rovers Navigate the Lunar Terrain of SLOPE 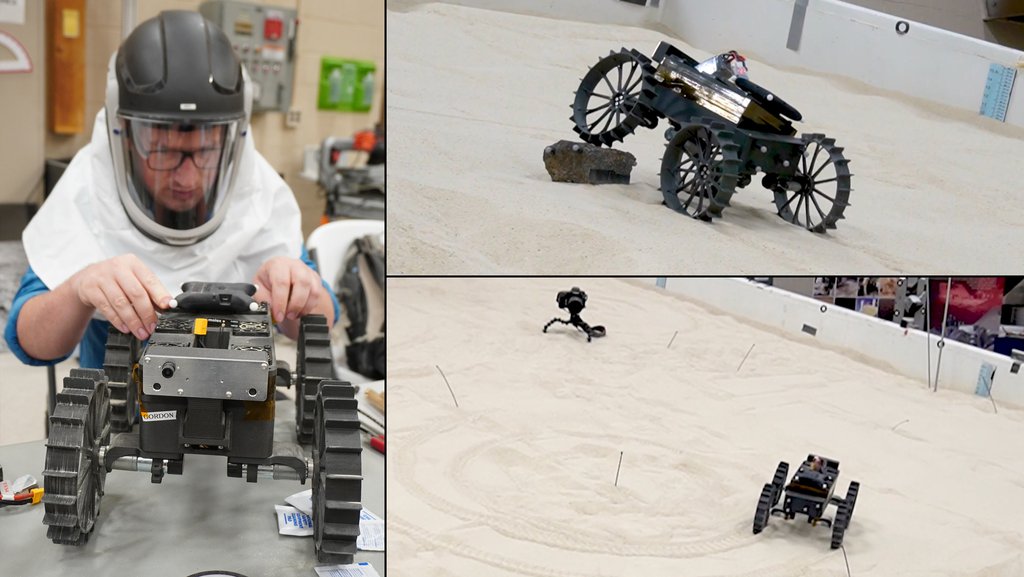 Mini-rovers designed to autonomously work together recently underwent tests at NASA’s Glenn Research Center, navigating obstacles and surfaces that they could encounter on the Moon.

A team of shoebox-size rover scouts was recently put to the test at a NASA Glenn Research Center lab. The facility, called the Simulated Lunar Operations lab (or SLOPE) is designed to mimic lunar and planetary surface operations. The mini-rovers traversed simulated lunar soil – called regolith – to better understand the types of challenges that lunar rovers of this size will face on the Moon’s surface. The results of the tests will be used to characterize small rover performance and improve the rovers’ mobility design.

NASA’s Cooperative Autonomous Distributed Robotic Exploration (CADRE) project is developing robots programmed to work as an autonomous team to explore the lunar surface, collect data, and map different areas of the Moon in 3D. With each mini-rover free to move independently, together they can perform distributed measurements that would be nearly impossible for a single rover to achieve. The core autonomy technology developed under CADRE could also be used on other planetary bodies such as Mars and beyond.

NASA Glenn’s SLOPE (Simulated Lunar Operations) lab re-creates some of the conditions robots could face on a future Moon mission. Watch this video to see how the CADRE rovers fared as they trundled over rocks and simulated lunar soil.

“We tested the traction of the wheels in different conditions,” said Alex Schepelmann, lead roboticist for SLOPE at NASA Glenn. “The rover wheels were also tested to see if they could negotiate large lunar rocks and climb the slopes of our tilt beds that simulate the hills of the Moon’s surface.”

The SLOPE team also used scientific imaging equipment to determine the amount of wheel slip in the simulated lunar soil, which could affect the rovers’ ability to determine location accurately using their sensors.

“If the wheel slips, the rover might think it has gone farther than it has actually traveled, since GPS technology isn’t yet developed for the Moon,” Schepelmann said.

Characterizing this slip is an important input to the rovers’ algorithms that determine position. The CADRE software will also use data from an inertial measurement unit, stereo cameras, and a Sun sensor to track the position of each scout as they explore the lunar surface.

According to Schepelmann, the CADRE robots utilize spoked wheels, like the wheels on the VIPER rover, which will be delivered to the Moon in late 2023 to look for ice and other resources.

The CADRE rovers continue to be developed and tested at JPL. CADRE is targeted to fly as a technology demonstration on a commercial robotic lander within the next five years via NASA’s Commercial Lunar Payload Services (CLPS) Initiative.