7 Things to Know About the Mars 2020 Perseverance Rover Mission 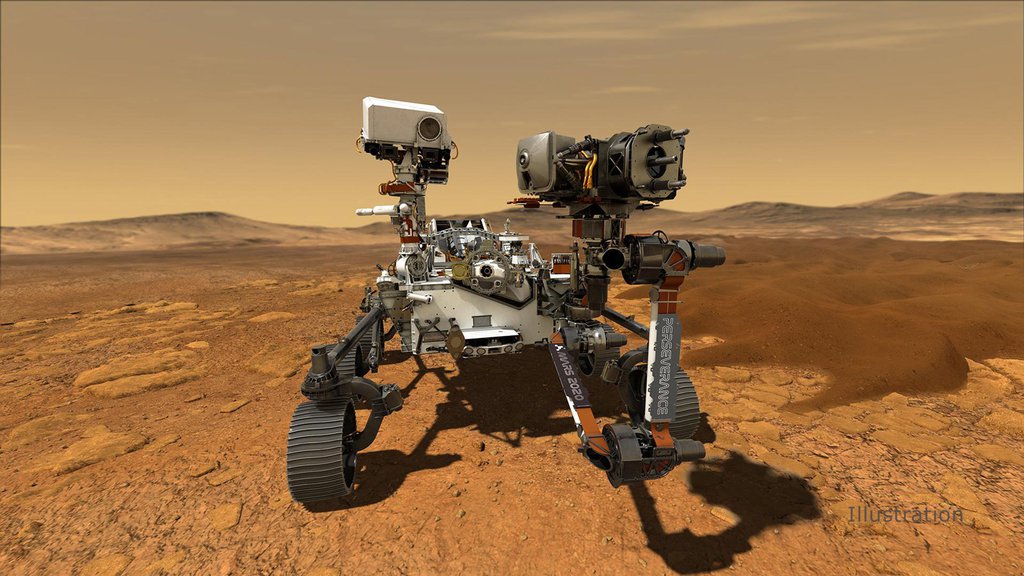 This illustration depicts NASA's Perseverance rover operating on the surface of Mars. Perseverance will land at the Red Planet's Jezero Crater a little after 3:40 p.m. EST (12:40 p.m. PST) on Feb. 18, 2021. For more information about the mission, go to https://mars.nasa.gov/mars2020/

NASA's next rover to the Red Planet launched on July 30 and will land on Feb. 18, 2021. These highlights will get you up to speed on the ambitious mission.

In less than a month, NASA expects to launch the Mars 2020 Perseverance mission from Cape Canaveral, Florida. Loaded with scientific instruments, advanced computational capabilities for landing, and other new systems, the Perseverance rover is the largest, heaviest, most sophisticated vehicle NASA has ever sent to the Red Planet.

"Perseverance sets a new bar for our ambitions at Mars," said Lori Glaze, planetary science director at NASA Headquarters in Washington. "We will get closer than ever before to answering some of science's longest-standing questions about the Red Planet, including whether life ever arose there."

What drives Perseverance's mission and what will it do at the Red Planet? Here are seven things to know:

1. The Perseverance rover draws on the NASA - and scientific - spirit of overcoming challenges.

The rover has a tough mission. Not only does it have to land on a treacherous planet, it has to work on its science goals: searching for signs of ancient microbial life, characterizing the planet's geology and climate, collecting carefully selected rock and sediment samples for future return to Earth, and paving the way for human exploration beyond the Moon.

These activities epitomize why NASA chose the name Perseverance from among the 28,000 essays submitted during the "Name the Rover" contest. Because of the coronavirus pandemic, the months leading up to the launch in particular have required creative problem solving, teamwork, and determination.

"Building this incredibly sophisticated rover has been the hardest thing I've ever been a part of as an engineer," said Ray Baker, the mission's flight system manager at NASA's Jet Propulsion Laboratory in Southern California. "While coronavirus added significant challenges and logistics, the team has shown great determination and diligence to build a rover we can be proud to send to Mars. We can't wait to see the many years of dedication pay off at the launch pad."

2. Perseverance builds on the lessons of other Mars rovers.

NASA's modest first rover - Sojourner - demonstrated in 1997 that a robot could rove on the Red Planet. Spirit and Opportunity, which landed in 2004, found evidence that the planet once hosted running water before becoming a frozen desert. Curiosity, which has been exploring Mars since 2012, discovered that its landing site, Gale Crater, was home to of a lake billions of years ago, with an environment that could have supported microbial life.

Perseverance aims to take the next step, seeking, as a primary goal, to answer one of the key questions of astrobiology: Are there any signs that life once existed on Mars?

3. The rover will be landing in a place with high potential for finding signs of past microbial life.

Jezero Crater is 28 miles (45 kilometers) wide and sits on the western edge of Isidis Planitia, a giant basin just north of the Martian equator dug out long ago when a space rock hit the surface. Sometime between 3 billion and 4 billion years ago at Jezero, a river flowed into a body of water the size of Lake Tahoe.

"The science team has had many discussions internally and externally about where the next Mars rover should go," said Ken Farley, the mission's project scientist, based at Caltech in Pasadena. "We ultimately chose Jezero Crater because it is such a promising location for finding organic molecules and other potential signs of microbial life."

4. Perseverance will also be collecting important data about Mars' geology and climate.

Mars orbiters have been collecting images and other data from Jezero Crater from about 200 miles (322 kilometers) above, but finding signs of ancient life on the surface will require much closer inspection. It demands a rover like Perseverance, which can look for signs that may be related to life and can analyze the context in which they were found to see if they were biological in origin.

Understanding Mars' past climate conditions and reading the geological history embedded in its rocks will also give us a sense of why Earth and Mars - which formed from the same primordial stuff - ended up so different.

5. Perseverance is the first leg of a round trip to Mars.

Verifying ancient microscopic life on Mars carries an enormous burden of proof. Perseverance is the first rover to bring a sample-gathering system to Mars that will package promising examples of rocks and sediments for return to Earth by a future mission.

A Mars Sample Return campaign is being planned by NASA and the European Space Agency because here on Earth we can investigate the samples with instruments too large and complex to send to Mars. Terrestrial laboratories would be used to establish whether any potential signs of life detected by the rover are definitive evidence of past life.

6. Perseverance carries instruments and technology that will pave the way for human missions to the Moon and Mars.

The Terrain-Relative Navigation system, which autonomously helps the rover avoid hazards during landing, and the Mars Science Laboratory Entry, Descent, and Landing Instrumentation 2 (MEDLI2) sensor suite, which gathers crucial data during the journey through the Martian atmosphere, will help future human missions land more safely and with larger payloads on other worlds.

Perseverance also has features that will help astronauts once they're on the surface of another world: improved self-driving smarts for more efficient travel and the Mars Environmental Dynamics Analyzer (MEDA) instrument suite, which will provide key information about weather, climate, and dust. Meanwhile, the Mars Oxygen In-Situ Resource Utilization Experiment (MOXIE) technology demonstration aims to produce oxygen from Mars' carbon dioxide atmosphere, demonstrating a way future explorers might produce oxygen for rocket propellant as well as for breathing.

The Perseverance rover and other parts of the Mars 2020 spacecraft feature 23 cameras - more cameras than any interplanetary mission in history. They'll help engineers put together a high-definition view of the landing process after the rover safely touches down on Mars on Feb. 18, 2021, and they'll deliver images of the landscape and scientific specimens in breathtaking detail. And as with previous Mars missions, this one plans to make raw and processed images available on the mission's website.

Perseverance also carries three silicon chips with the names of nearly 11 million people who signed up to ride with the mission.

You can follow Perseverance's adventure on social media @NASAPersevere and @NASAMars.

For more highlights and other details about the launch, check out the mission's press kit:

For more on the mission, visit: