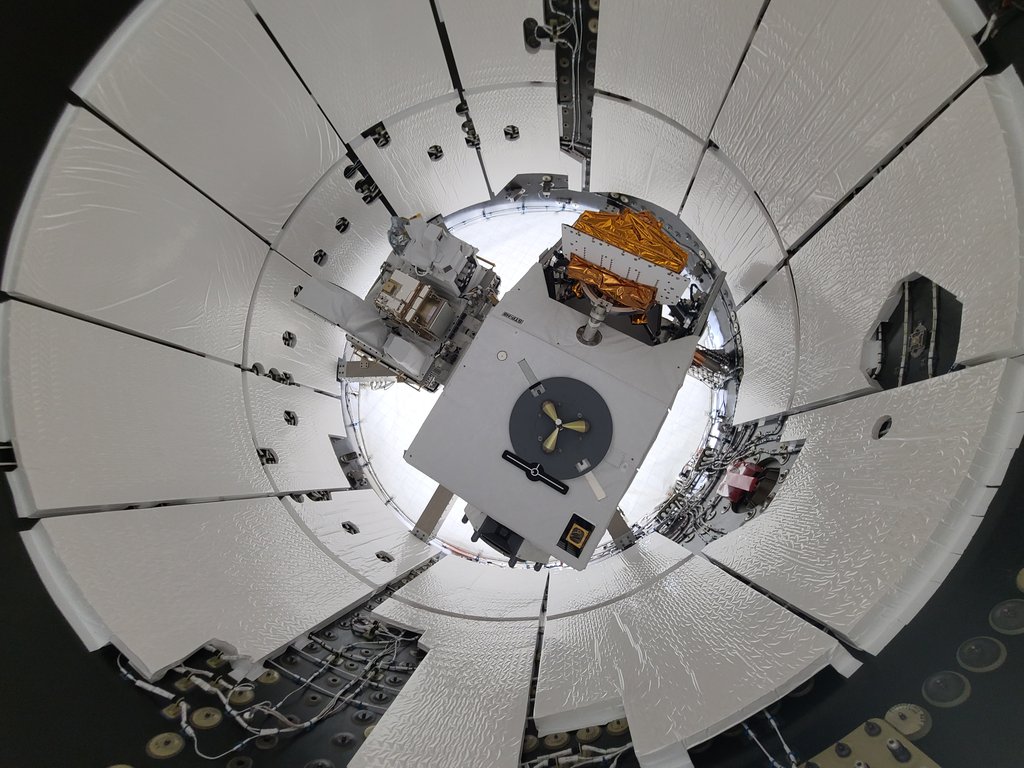 The COWVR and TEMPEST instruments are in the trunk of a SpaceX Dragon cargo spacecraft for the December 2021 commercial resupply mission for NASA to the International Space Station. 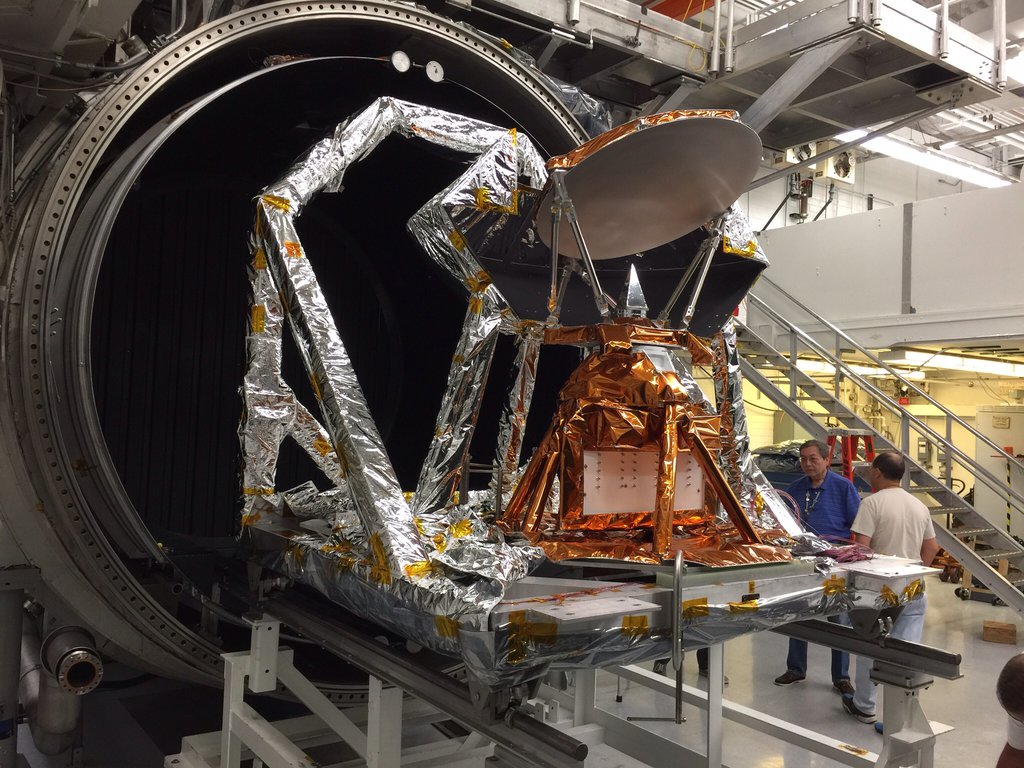 The COWVR instrument, which is headed to the International Space Station in December 2021, during a thermal test in 2015.

Launched Tuesday to the space station, the COWVR and TEMPEST two instruments could lead the way to big improvements in gathering key information for weather forecasting.

The Compact Ocean Wind Vector Radiometer (COWVR) is no bigger than a minifridge. The Temporal Experiment for Storms and Tropical Systems (TEMPEST) is even smaller – about the size of a cereal box. Yet these two compact science instruments are designed to do a big job: to make the same high-quality atmospheric observations as weather satellites many times their size and at a fraction of the cost.

Built by NASA’s Jet Propulsion Laboratory in Southern California, the two radiometers are part of the U.S. Air Force’s Space Test Program-Houston 8 (STP-H8) and are headed to the International Space Station Tuesday as part of SpaceX’s 24th commercial resupply mission for the agency. They’re considered technology demonstrations, and if they perform as planned, weather forecasting could be in for a technological boost.

Here are five things to know about COWVR and TEMPEST:

They aim to collect the same high-quality data as their much larger predecessors.

Together, COWVR and TEMPEST will provide many of the data points that scientists use to produce weather and climate forecasts: They’ll measure not only the speed and direction of winds blowing over the ocean surface, but also precipitation, atmospheric moisture, how that moisture is distributed vertically, and other conditions at the ocean surface and in the atmosphere.

From 2003 to 2020, these types of measurements were acquired by the 990-pound (450-kilogram) Windsat instrument aboard the U.S. Department of Defense’s Coriolis satellite. Windsat lasted well beyond its anticipated lifespan. If COWVR and TEMPEST prove they’re up to the task, they (and small instruments like them) will be able to take the place of larger, aging satellites without compromising on data quality.

They have the potential to improve storm forecasts.

COWVR and TEMPEST will be attached to the space station, which circles our planet in low-Earth orbit from west to east about 16 times per day. Because of the station’s unique orbit, the two instruments will spend most of their time over the mid-latitudes and tropics – areas prone to storms – and revisit them more frequently than sensors in other orbits. The additional data will help scientists better understand storm formation and better track developing storm systems.

COWVR and TEMPEST will also be able to send the data back to Earth faster than some other instruments currently in use, enabling scientists and forecasters to monitor the rapid intensification many storms undergo – in near real time. “Most satellites communicate with just a few ground stations around the world, and that takes time,” said Shannon Brown, principal investigator for COWVR based at JPL. “The data could be a couple of hours old before it’s even on the ground, and then it still needs to be processed.”

COWVR and TEMPEST will instead send their data back to Earth via NASA’s tracking and data relay satellite (TDRS) constellation. “TDRS essentially provides a direct data stream. So, once the sensors pass over a big hurricane or cyclone, you’re going to get that data instantly,” Brown said. “It’ll be up-to-the-minute observations, which is something not usually available with the traditional approach” – and something that could save lives.

Their comprehensive data may improve weather and climate model predictions.

The frequency with which COWVR and TEMPEST will take measurements over areas within their orbit will allow them to collect more comprehensive data than other instruments – data that is expected to reduce uncertainties in weather and climate models.

“The current satellite sensors that measure wind speed and direction at the ocean surface are in Sun-synchronous orbits, meaning that they provide measurements at a given location only in the morning and in the evening, leaving gaps in between,” said JPL’s Tony Lee, co-lead of the mission’s science working group. “The space station’s orbit will allow COWVR and TEMPEST to take measurements across different times of day, reducing those gaps.”

Weather and climate models use this type of data to make predictions. The more data that is available, the more accurate the models – and the predictions based on them – will be.

The amount of heat and moisture released by the ocean influences atmospheric conditions; likewise, atmospheric conditions, such as wind, influence ocean currents and heat distribution. The more scientists learn about these interactions, the better they’ll understand how they affect weather in the short term and climate in the long term.

Getting suitable data to study these interactions can be tricky, though.

If successful, COWVR and TEMPEST could change that. COWVR’s main purpose is to measure the speed and direction of wind at the ocean surface, and TEMPEST’s is to provide the atmospheric water vapor measurements. Since they’re flying together and taking measurements over the same areas, they’ll be able to acquire this complementary data at the same time.

“Simultaneous measurements of the different variables alleviate the difficulty associated with sampling time differences that come from mixing measurements from different satellites at different times,” Lee said. It will also enable them to account for interactions that happen at shorter time scales – wind gusts stirring up the ocean and causing it to lose heat to the atmosphere, for example.

If COWVR and TEMPEST perform well, they’ll prove that comprehensive data vital to weather forecasting and a better understanding of climate can be obtained in a much smaller package with a much smaller price tag than previously thought.

Because the instruments are smaller and cheaper, organizations could launch three or four small satellites for the same cost as one of the larger variations. A constellation of these small satellites would be able to take measurements of a given area – such as over a developing storm – far more frequently than a corresponding single satellite could, resulting in even further refinement of weather models and forecasts.