45 Years Ago: Voyager 2 Begins Its Epic Journey to the Outer Planets and Beyond

The ambitious mission took advantage of a rare alignment of the outer planets before continuing its journey into interstellar space.

Forty-five years ago, the Voyager 2 spacecraft left Earth to begin an epic journey that continues to this day. The first of a pair of spacecraft, Voyager 2 lifted off on Aug. 20, 1977. NASA’s Jet Propulsion Laboratory in Southern California manages the spacecraft on their missions to explore the outer planets and beyond. Taking advantage of a rare planetary alignment to use the gravity of one planet to redirect the spacecraft to the next, the Voyagers initially targeted only Jupiter and Saturn, but Voyager 2 went on to explore Uranus and Neptune as well. The Voyagers carried sophisticated instruments to conduct their in-depth explorations of the outer planets. Both spacecraft continue to return data as they make their way out of our solar system and enter interstellar space.

In the 1960s, mission designers at JPL noted that the next alignment of the outer planets that occurs only every 175 years would happen in the late 1970s. Technology had advanced sufficiently that spacecraft could take advantage of this rare alignment to fly by Jupiter and use its gravity to bend their trajectories to visit Saturn, and repeat the process to also visit Uranus, Neptune, and Pluto. Launching several missions to visit each planet individually would take much longer and cost much more. The original plan to send two pairs of Thermoelectric Outer Planet Spacecraft on these Grand Tours proved too costly, leading to cancellation in 1971. The next year, NASA approved a scaled-down version of the project to launch a pair of Mariner-class spacecraft in 1977 to explore just Jupiter and Saturn. On March 7, 1977, NASA Administrator James C. Fletcher announced the renaming of these Mariner Jupiter/Saturn 1977 spacecraft as Voyager 1 and 2. Scientists held out hope that one of them could ultimately visit Uranus and Neptune, thereby fulfilling most of the original Grand Tour’s objectives. Pluto would have to wait many more years for its first visit.

From left: a 1975 illustration of the Mariner Jupiter/Saturn 1977 mission; a model of the Voyager spacecraft; the Aug. 20, 1977, launch of Voyager 2 at Cape Canaveral in Florida.

Each Voyager carried a suite of 11 instruments to study the planets during each encounter and to learn more about interplanetary space in the outer reaches of the solar system, including:

From left: a schematic of the Voyager spacecraft showing the science experiments; trajectories of the Voyagers through the solar system.

Voyager 2 left Earth first, lifting off on Aug. 20, 1977, atop a Titan IIIE-Centaur rocket from Launch Complex 41 at Cape Canaveral Air Force Station, now Cape Canaveral Space Force Station, in Florida. Although its twin launched two weeks later, it traveled on a faster trajectory and arrived at Jupiter four months earlier. Voyager 2 successfully crossed the asteroid belt between Dec. 10, 1977, and Oct. 21, 1978. In April 1978, its primary radio receiver failed, and it has been operating on its backup receiver ever since.

Voyager 2 images of Jupiter, left, and Saturn with its rings and several of its moons.

Voyager 2 conducted its observations of Jupiter between April 24 and Aug. 5, 1979, making its closest approach of 350,000 miles above the planet’s cloud tops on July 9. The spacecraft returned 17,000 images of Jupiter, many of its satellites, and confirmed Voyager 1’s discovery of a thin ring encircling the planet. Its other instruments returned information about Jupiter’s atmosphere and magnetic field. Jupiter’s massive gravity field bent the spacecraft’s trajectory, accelerating it toward Saturn.

Voyager 2 began its long-range observations of the ringed planet on June 5, 1981, passed within 26,000 miles of the planet’s cloud tops on Aug. 26, and concluded its studies on Sept. 4. The spacecraft captured 16,000 photographs of the planet, its rings, and many of its known satellites. It discovered several new ones, and its instruments returned data about Saturn’s atmosphere. Saturn’s gravity sent Voyager 2 on to Uranus. 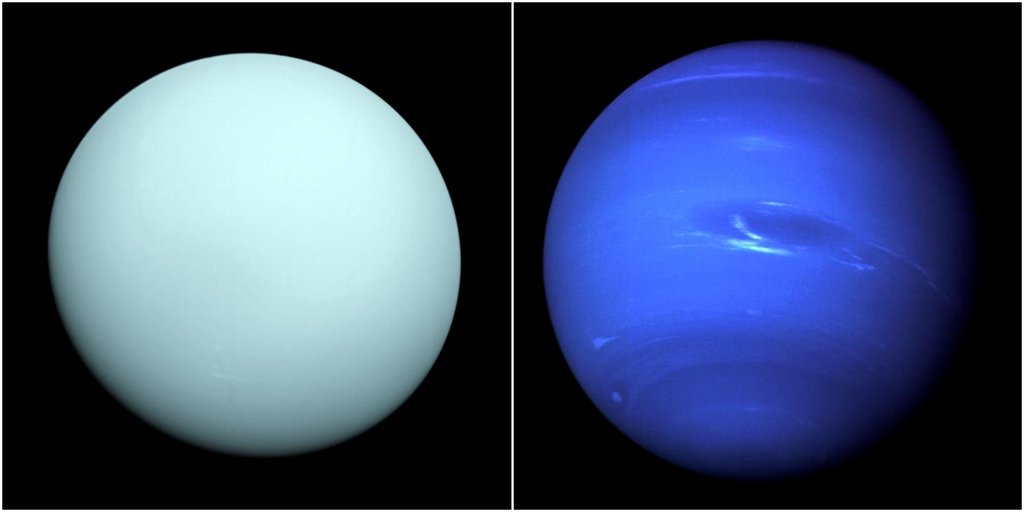 Voyager 2 carried out the first close-up observations of Uranus between Nov. 4, 1985, and Feb. 25, 1986, making its closest approach of 50,700 miles above the planet’s cloud tops on Jan. 24, 1986. It returned more than 7,000 photographs of the planet, its rings and moons, discovering two new rings and 11 new moons. The spacecraft’s instruments returned data about the planet’s atmosphere and its unusual magnetic field, tilted by 59 degrees compared to its rotational axis and offset from the planet’s center by about one-third of the planet’s radius.

Voyager 2 took advantage of Uranus’ gravity to send it on to its last planetary destination, Neptune. The spacecraft conducted the first close-up observations of the eighth planet between June 5 and Oct. 2, 1989, making its flyby just 3,408 miles above its north pole on Aug. 25, its closest approach to any planet since leaving Earth in 1977. This trajectory allowed Voyager 2 to observe Neptune’s large moon Triton, the last solid object it explored. During the encounter, it returned more than 9,000 images of the planet, its atmosphere, dark rings, and moons, discovering six new moons. Like Uranus, Voyager 2’s instruments revealed that Neptune has an unusual magnetic field, not only tilted 47 degrees from the planet’s axis but also significantly offset from the planet’s center. 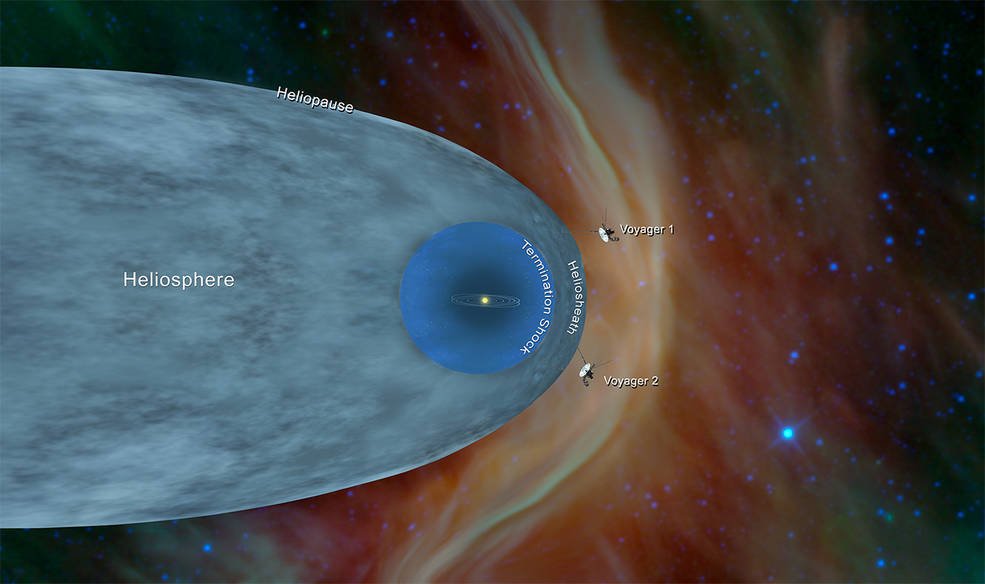 An illustration showing the position of the Voyager 1 and 2 spacecraft outside of the heliosphere, a protective bubble created by the sun that extends well past the orbit of Neptune.

Following its reconnaissance of Neptune, Voyager 2 began its Interstellar Mission extension that continues to this day. Over the years, several of the spacecraft’s instruments have been turned off to conserve power, beginning with the imaging system in 1998, but it continues to return data about cosmic rays and the solar wind. On Nov. 5, 2018, six years after its twin, Voyager 2 crossed the heliopause, the boundary between the heliosphere – the bubble-like region of space created by the Sun – and the interstellar medium. Currently, Voyager 2 continues its mission, more than 12 billion miles from Earth, so distant that a signal from the spacecraft takes 18 hours to reach Earth, and just as long for a return signal to reach the craft. Engineers expect that Voyager 2 will continue to return data until about 2025. And just in case an alien intelligence finds it one day, Voyager 2 like its twin carries a gold-plated record that contains information about its home planet, including recordings of terrestrial sounds, music, and greetings in 55 languages. Engineers at NASA thoughtfully included instructions on how to play the record. 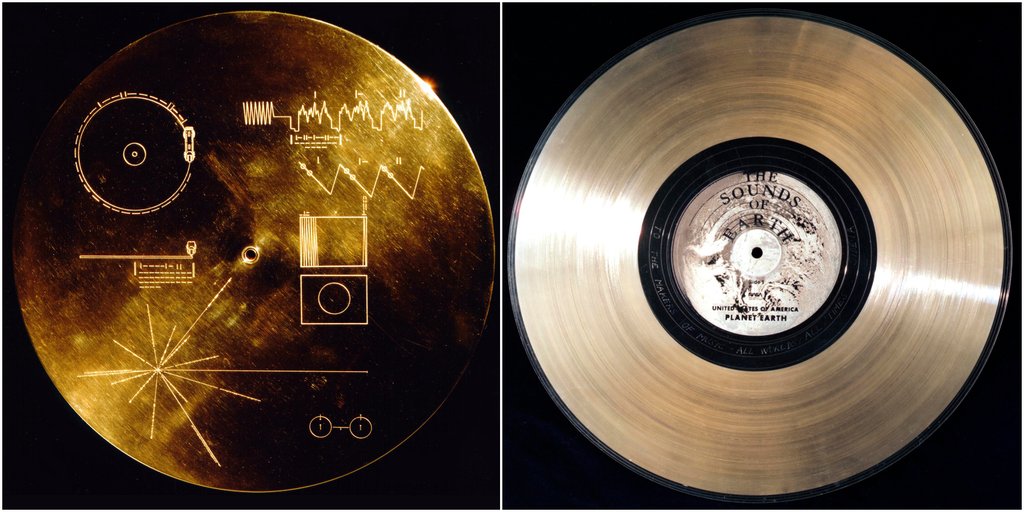 The gold disc carried by each Voyager.