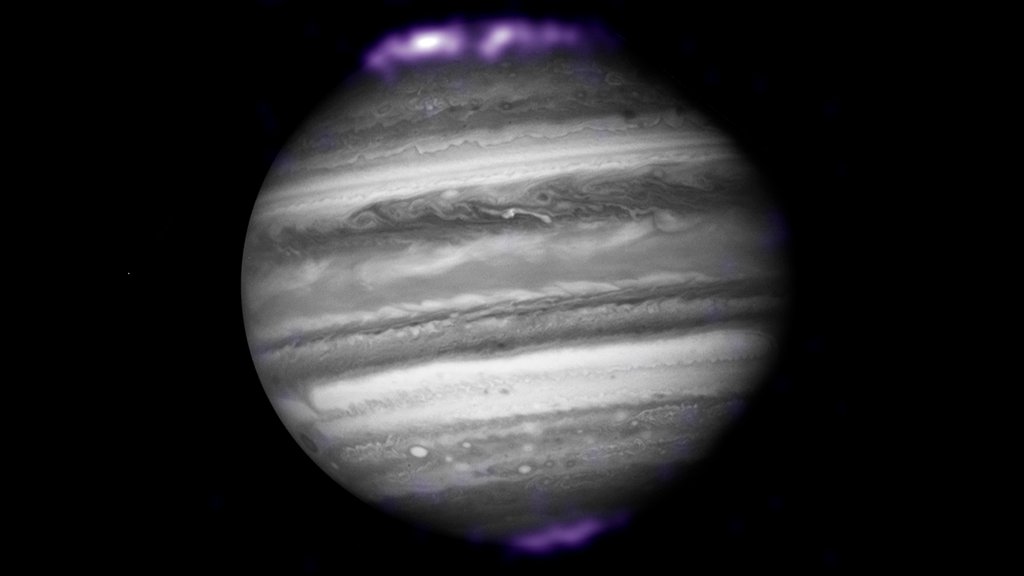 The purple hues in this image show X-ray emissions from Jupiter’s auroras, detected by NASA’s Chandra Space Telescope in 2007. They are overlaid on an image of Jupiter taken by NASA’s Hubble Space Telescope. Jupiter is the only gas giant planet where scientists have detected X-ray auroras.

A puzzler about the gas giant’s intense northern and southern lights has been deciphered.

Planetary astronomers combined measurements taken by NASA’s Juno spacecraft orbiting Jupiter, with data from ESA’s (the European Space Agency’s) Earth-orbiting XMM-Newton mission, to solve a 40-year-old mystery about the origins of Jupiter’s unusual X-ray auroras. For the first time, they have seen the entire mechanism at work: The electrically charged atoms, or ions, responsible for the X-rays are “surfing” electromagnetic waves in Jupiter’s magnetic field down into the gas giant’s atmosphere.

A paper on the study was published on July 9 in the journal Science Advances.

Auroras have been detected on seven planets in our solar system. Some of these light shows are visible to the human eye; others generate wavelengths of light we can only see with specialized telescopes. Shorter wavelengths require more energy to produce. Jupiter has the most powerful auroras in the solar system and is the only one of the four giant planets with an aurora that has been found to emit X-rays.

Planetary astronomers have been fascinated with Jupiter’s X-ray auroral emission since its discovery four decades ago because it was not immediately clear how the energy required to produce it is generated. They knew these surprising Jovian northern and southern lights are triggered by ions crashing into Jupiter’s atmosphere. But until now scientists had no idea how the ions responsible for the X-ray light show are able to get to the atmosphere in the first place.

At Earth, auroras are usually visible only in a belt surrounding the magnetic poles, between 65 and 80 degrees latitude. Beyond 80 degrees, auroral emission disappears because the magnetic field lines leave Earth and connect to the magnetic field in the solar wind, which is the constant flux of electrically charged particles ejected by the Sun. These are called open field lines, and in the traditional picture, Jupiter’s and Saturn’s high-latitude polar regions are not expected to emit substantial auroras, either.

However, Jupiter’s X-ray auroras are different. They exist poleward of the main auroral belt and pulsate, and those at the north pole often differ from those at the south pole. These are typical features of a closed magnetic field, where the magnetic field line exits the planet at one pole and reconnects with the planet at the other. All planets with magnetic fields have both open and closed field components.

Scientists studying the phenomena turned to computer simulations and found that the pulsating X-ray auroras could be linked to closed magnetic fields that are generated inside Jupiter and then stretch out millions of miles into space before turning back. But how to prove the model was viable?

The study authors turned to data acquired by both Juno and XMM-Newton from July 16 to 17, 2017. During the two-day span, XMM-Newton observed Jupiter continuously for 26 hours and saw X-ray aurora pulsating every 27 minutes.

At the same time, Juno had been traveling between 62 and 68 Jupiter radii (about 2.8 to 3 million miles, or 4.4 to 4.8 million kilometers) above the planet’s pre-dawn area. This was exactly the region that the team’s simulations suggested was important for triggering the pulsations, so they searched the Juno data for any magnetic processes that were occurring at the same rate.

They found that fluctuations of Jupiter’s magnetic field caused the pulsating X-ray auroras. The outer boundary of the magnetic field is struck directly by the particles of the solar wind and compressed. These compressions heat ions that are trapped in Jupiter’s extensive magnetic field, which are millions of miles away from the planet’s atmosphere.

This triggers a phenomenon called electromagnetic ion cyclotron (EMIC) waves, in which the particles are directed along the field lines. Guided by the field, the ions ride the EMIC wave across millions of miles of space, eventually slamming into the planet’s atmosphere and triggering the X-ray auroras.

“What we see in the Juno data is this beautiful chain of events. We see the compression happen, we see the EMIC wave triggered, we see the ions, and then we see a pulse of ions traveling along the field line,” said William Dunn of the Mullard Space Science Laboratory, University College London, and a co-author of the paper. “Then, a few minutes later, XMM sees a burst of X-rays.”

Now that the missing piece of the process has been identified for the first time, it opens up a wealth of possibilities for where it could be studied next. For example, at Jupiter, the magnetic field is filled with sulfur and oxygen ions being emitted by the volcanoes on the moon Io. At Saturn, the moon Enceladus jets water into space, filling Saturn’s magnetic field with water group ions.