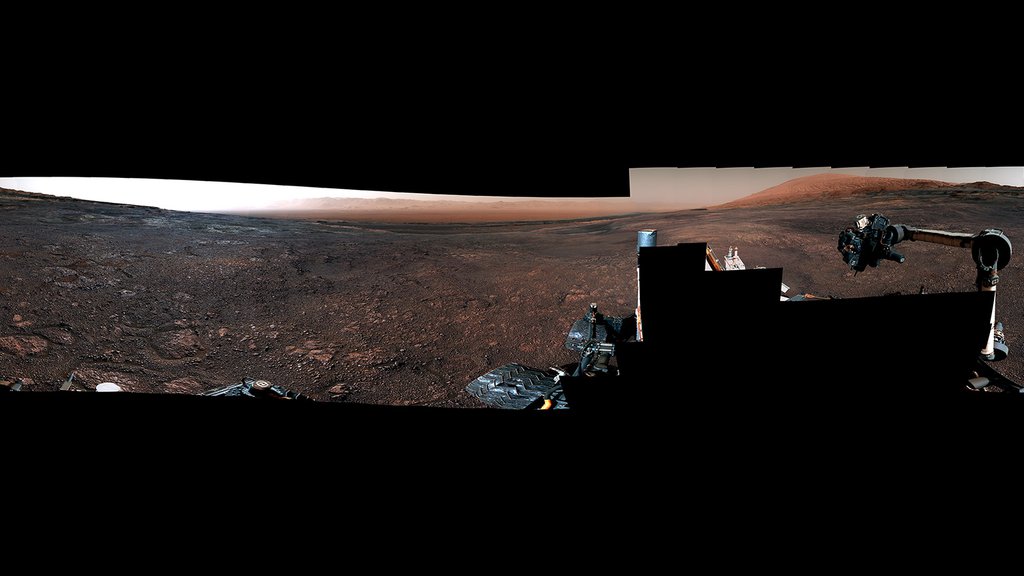 This panorama from the Mast Camera (Mastcam) on NASA's Curiosity Mars rover was taken on Dec. 19 (Sol 2265). The rover's last drill location on Vera Rubin Ridge is visible, as well as the clay region it will spend the next year exploring.› Full image and caption
Credit: NASA/JPL-Caltech/MSSS

A new immersive video lets viewers explore Curiosity's last drill site on a Martian ridge. Scientists are eager to study the data it collected there.

After exploring Mars' Vera Rubin Ridge for more than a year, NASA's Curiosity rover recently moved on. But a new 360-video lets the public visit Curiosity's final drill site on the ridge, an area nicknamed "Rock Hall." The video was created from a panorama taken by the rover on Dec. 19. It includes images of its next destination - an area the team has been calling the "clay-bearing unit" and recently named "Glen Torridon" - and the floor of Gale Crater, home to Mount Sharp, the geological feature the rover has been climbing since 2014.

Even though the rover has left the ridge, Curiosity's team is still piecing together the story of its formation. While there have been a number of clues so far, none fully explains why the ridge has resisted erosion compared with the bedrock around it. But the rover's investigation did find that the rocks of the ridge formed as sediment settled in an ancient lake, similar to rock layers below the ridge.

"We've had our fair share of surprises," said Curiosity science team member Abigail Fraeman of NASA's Jet Propulsion Laboratory in Pasadena, California. "We're leaving with a different perspective of the ridge than what we had before."

A NASA orbiter studying the ridge had previously identified a strong signal from hematite, an iron-rich mineral that often forms in water. Curiosity confirmed the presence of hematite, along with other signs of ancient water, like crystals. These signs appeared in patches, leading the team to suspect that over time groundwater affected certain parts of the ridge differently than others. Another discovery was that the hematite signatures Curiosity mapped didn't always match the view from space.

"The whole traverse is helping us understand all the factors that influence how our orbiters see Mars," Fraeman said. "Looking up close with a rover allowed us to find a lot more of these hematite signatures. It shows how orbiter and rover science complement one another."

The ridge has also served as the backdrop to a roller-coaster year: Curiosity's drill returned to action, only to be stymied by surprisingly hard rocks. Nevertheless, the team managed to get samples from the three major rock types of the ridge. To get around a memory issue, engineers also swapped the rover's computers (the spacecraft was designed with two so that it can continue operations if one experiences a glitch). While the issue is still being diagnosed, operations have continued with little impact on the mission.

The rover's new home, Glen Torridon, is in a trough between Vera Rubin Ridge and the rest of the mountain. This region had been called the clay-bearing unit because orbiter data show that the rocks there contain phyllosilicates - clay minerals that form in water and that could tell scientists more about the ancient lakes that were present in Gale Crater off and on throughout its early history.

"In addition to indicating a previously wet environment, clay minerals are known to trap and preserve organic molecules," said Curiosity Project Scientist Ashwin Vasavada of JPL. "That makes this area especially promising, and the team is already surveying the area for its next drill site."