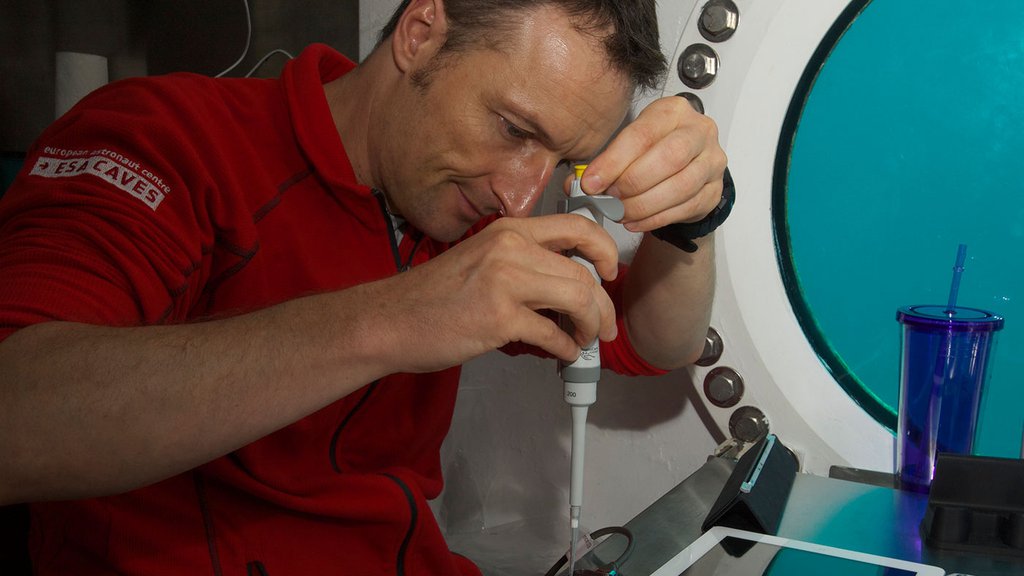 In this 2016 photo, Matthias Maurer of ESA inserts samples into the MinION DNA sequencer while at NASA's Extreme Environment Mission Operations (NEEMO), an underwater research facility. The MinION device will also be used as part of the Omics in Space project, which will develop new tools for studying microbiology in space.
Credit: NASA 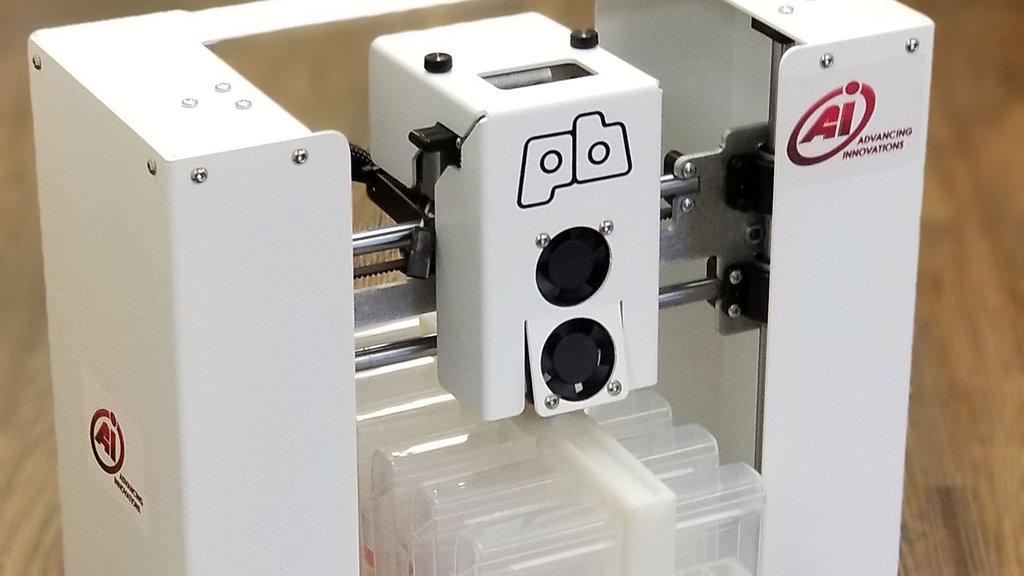 An automated DNA extractor designed by AI Biosciences. A new NASA project seeks to modify the plastic cartridge in this extractor so that it can be 3D-printed on the International Space Station. The cartridge design relies on multiple wells which a DNA sample can be dipped into; fluids in each well purifies the sample and prepares it for analysis by a MinION DNA sequencer.
Credit: AI Biosciences 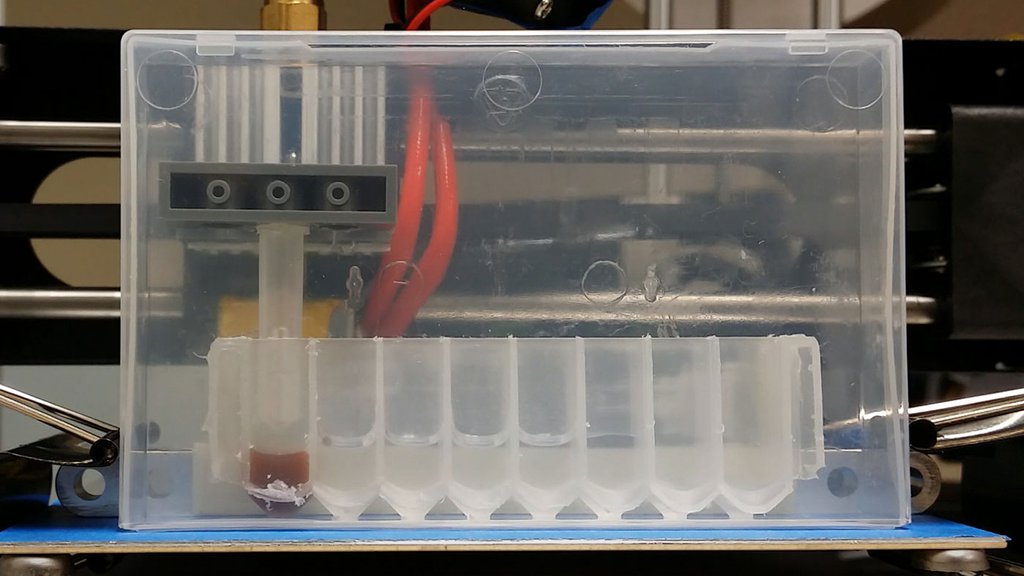 A plastic cartridge design that will be made 3D printable as part of the Omics in Space project. Each well in the cartridge can hold solutions which a DNA sample can be dipped into. These solutions are mixed with magnetic particles that help purify the sample before inserting it into a MinION DNA sequencer.
Credit: AI Biosciences

New technology could cut months off the time it takes to study molecular biology on the International Space Station.

If humans are destined for deep space, they need to understand the space environment changes health, including aging and antibiotic resistance.

A new NASA project could help. It aims to develop technology used to study "omics" -- fields of microbiology that are important to human health. Omics includes research into genomes, microbiomes and proteomes.

The Omics in Space project is being led by NASA's Jet Propulsion Laboratory in Pasadena, California. The project was recently funded by NASA's Translational Research Institute for Space Health four years of study. Over that time, NASA hopes to develop 3-D printable designs for instruments on the International Space Station (ISS), that can handle liquids like blood samples without spilling in microgravity. These tools could enable astronauts to analyze biological samples without sending them back to Earth.

Learning how bacteria affect crew health, or how genes affect aging and disease, can ensure the safety of long-term missions to Mars and beyond.

No Overnight Mail in Space

NASA has already studied omics with efforts like the Microbial Tracking 1 experiment, which examined microbial diversity on the space station. But there's no way to process samples on the station right now, so they have to be sent down to Earth.

It can be months between the time a sample is taken and an analysis is done, said Kasthuri Venkateswaran of JPL, principal investigator for the Omics in Space project.

"You don't have overnight mail when you go to space," Venkateswaran said. "You have to do all the analysis by yourself. This project will develop an automated system for studying molecular biology with minimal crew intervention."

One of the biggest challenges with preparing samples is handling fluids in microgravity. Astronauts collect a variety of samples, including their own saliva and blood, as well as microbes swabbed from the walls of the ISS. These samples have to then be mixed with water so they can be injected into instruments for analysis. Without the proper tools, samples can spill, float or form air bubbles that could compromise results.

Omics in Space will build on this success by developing an automated DNA/RNA extractor which will prepare samples for aMinION device. A critical part of this extractor is a 3-D printable plastic cartridge needed to extract nucleic acids from the samples for the MinION sequencing.

All of this technology has been tested here on Earth, said Camilla Urbaniak, a post-doctoral researcher at JPL and co-investigator on Omics in Space.

"We're taking what's on Earth to analyze DNA and consolidating all the steps into an automated system," Urbaniak said. "What's new is we're developing a one-stop-shop that can extract and process all of these samples."

The Future of Space Health

Previous omics research has revealed that astronaut immune systems tend to be weaker after living on the ISS. Scientists aren't sure why.

The field of epigenetics, which studies how genes are expressed -- including how humans age -- could help explain how microgravity and cosmic rays affect our DNA.

But Omics in Space isn't just about the human passengers who travel to the ISS. There are also microbes, carried by humans and cargo alike, which accumulate on board spacecraft.

"We need to put together a 'passenger list' of the microbes that ride along to space," said Nitin Singh of JPL, another co-investigator on the project. "Then, astronauts can detect genetic markers revealing whether these microbes are helpful or harmful -- the 'luggage' these passengers are bringing with them."

Being able to respond to changes in a crew's environment is crucial during long space voyages, said Ganesh Mohan of JPL, a co-investigator on the project who will be working to detect pathogenic microbes.

"You can see whether a possibly harmful microbe is increasing in number in real time. If needed, we could then take actions to counteract those microbes," said Mohan.

The Omics in Space project is funded by NASA's Translational Research Institute for Space Health, which is jointly operated with the Baylor College of Medicine in Houston, Texas. The institute is overseen by NASA's Human Research Program.