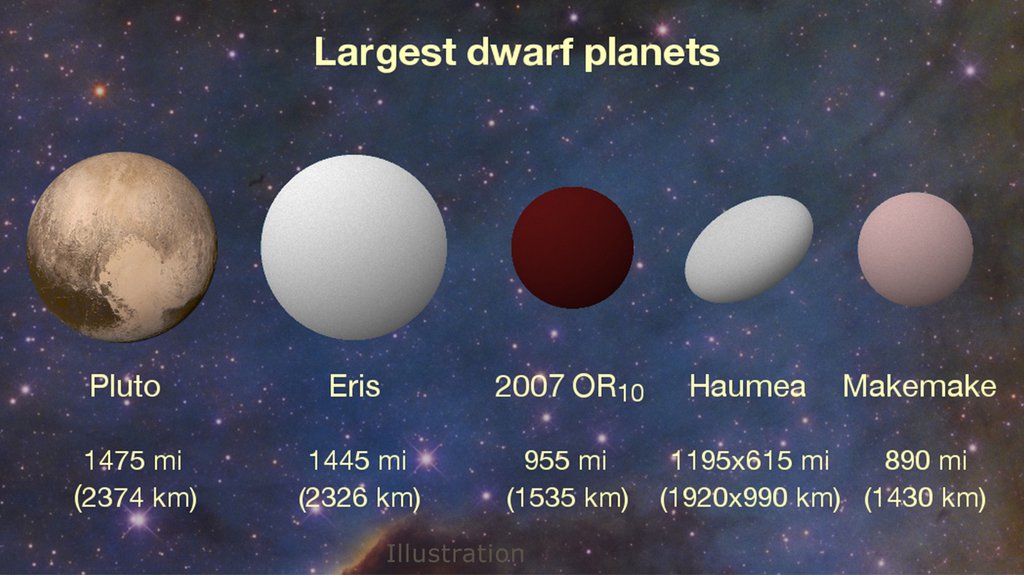 New K2 results peg 2007 OR10 as the largest unnamed body in our solar system and the third largest of the current roster of about half a dozen dwarf planets. The dwarf planet Haumea has an oblong shape that is wider on its long axis than 2007 OR10, but its overall volume is smaller. Credits: Konkoly Observatory/András Pál, Hungarian Astronomical Association/Iván Éder, NASA/JHUAPL/SwRI

New results from NASA's Kepler/K2 mission reveal the largest unnamed body in our solar system and the third largest of the current roster of dwarf planets.

Dwarf planets tend to be a mysterious bunch. With the exception of Ceres, which resides in the main asteroid belt between Mars and Jupiter, all members of this class of minor planets in our solar system lurk in the depths beyond Neptune. They are far from Earth - small and cold - which makes them difficult to observe, even with large telescopes. So it's little wonder astronomers only discovered most of them in the past decade or so.

Pluto is a prime example of this elusiveness. Before NASA's New Horizons spacecraft visited it in 2015, the largest of the dwarf planets had appeared as little more than a fuzzy blob, even to the keen-eyed Hubble Space Telescope. Given the inherent challenges in trying to observe these far-flung worlds, astronomers often need to combine data from a variety of sources in order to tease out basic details about their properties.

Recently, a group of astronomers did just that by combining data from two space observatories to reveal something surprising: a dwarf planet named 2007 OR10 is significantly larger than previously thought.

NASA's Kepler spacecraft observed dwarf planet 2007 OR10 for 19 days in late 2014. The object's apparent movement (indicated by the arrow) against the stars is caused by Kepler's changing position as it orbits the sun. The diffuse light at right is from Mars, which was near the field of view. Credits: Konkoly Observatory/László Molnár and András Pál

The results peg 2007 OR10 as the largest unnamed world in our solar system and the third largest of the current roster of about half a dozen dwarf planets. The study also found that the object is quite dark and rotating more slowly than almost any other body orbiting our sun, taking close to 45 hours to complete its daily spin.

For their research, the scientists used NASA's repurposed planet-hunting Kepler space telescope -- its mission now known as K2 -- along with the archival data from the infrared Herschel Space Observatory. Herschel was a mission of the European Space Agency with NASA participation. The research paper reporting these results is published in The Astronomical Journal.

"K2 has made yet another important contribution in revising the size estimate of 2007 OR10. But what's really powerful is how combining K2 and Herschel data yields such a wealth of information about the object's physical properties," said Geert Barentsen, Kepler/K2 research scientist at NASA's Ames Research Center in Moffett Field, California.

The revised measurement of the planet's diameter, 955 miles (1,535 kilometers), is about 60 miles (100 kilometers) greater than the next largest dwarf planet, Makemake, or about one-third smaller than Pluto. Another dwarf planet, named Haumea, has an oblong shape that is wider on its long axis than 2007 OR10, but its overall volume is smaller.

Like its predecessor mission, K2 searches for the change in brightness of distant objects. The tiny, telltale dip in the brightness of a star can be the signature of a planet passing, or transiting, in front. But, closer to home, K2 also looks out into our solar system to observe small bodies such as comets, asteroids, moons and dwarf planets. Because of its exquisite sensitivity to small changes in brightness, Kepler is an excellent instrument for observing the brightness of distant solar system objects and how that changes as they rotate.

Figuring out the size of small, faint objects far from Earth is tricky business. Since they appear as mere points of light, it can be a challenge to determine whether the light they emit represents a smaller, brighter object, or a larger, darker one. This is what makes it so difficult to observe 2007 OR10 -- although its elliptical orbit brings it nearly as close to the sun as Neptune, it is currently twice as far from the sun as Pluto.

Enter the dynamic duo of Kepler and Herschel.

Previous estimates based on Herschel data alone suggested a diameter of roughly 795 miles (1,280 kilometers) for 2007 OR10. However, without a handle on the object's rotation period, those studies were limited in their ability to estimate its overall brightness, and hence its size. The discovery of the very slow rotation by K2 was essential for the team to construct more detailed models that revealed the peculiarities of this dwarf planet. The rotation measurements even included hints of variations in brightness across its surface.

Together, the two space telescopes allowed the team to measure the fraction of sunlight reflected by 2007 OR10 (using Kepler) and the fraction absorbed and later radiated back as heat (using Herschel). Putting these two data sets together provided an unambiguous estimation of the dwarf planet's size and how reflective it is.

According to the new measurements, the diameter of 2007 OR10 is some 155 miles (250 kilometers) larger than previously thought. The larger size also implies higher gravity and a very dark surface -- the latter because the same amount of light is being reflected by a larger body. This dark nature is different from most dwarf planets, which are much brighter. Previous ground-based observations found 2007 OR10 has a characteristic red color, and other researchers have suggested this might be due to methane ices on its surface.

"Our revised larger size for 2007 OR10 makes it increasingly likely the planet is covered in volatile ices of methane, carbon monoxide and nitrogen, which would be easily lost to space by a smaller object," said András Pál at Konkoly Observatory in Budapest, Hungary, who led the research. "It's thrilling to tease out details like this about a distant, new world -- especially since it has such an exceptionally dark and reddish surface for its size."

As for when 2007 OR10 will finally get a name, that honor belongs to the object's discoverers. Astronomers Meg Schwamb, Mike Brown and David Rabinowitz spotted it in 2007 as part of a survey to search for distant solar system bodies using the Samuel Oschin Telescope at Palomar Observatory near San Diego.

"The names of Pluto-sized bodies each tell a story about the characteristics of their respective objects. In the past, we haven't known enough about 2007 OR10 to give it a name that would do it justice," said Schwamb. "I think we're coming to a point where we can give 2007 OR10 its rightful name."