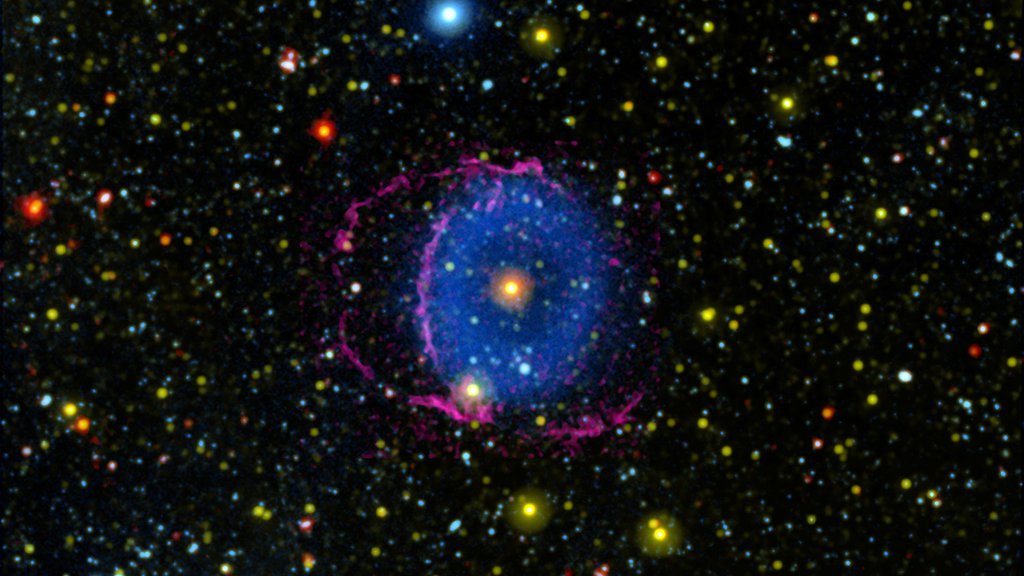 The Blue Ring Nebula consists of two expanding cones of gas ejected into space by a stellar merger. As the gas cools, it forms hydrogen molecules that collide with particles in interstellar space, causing them to radiate far-ultraviolet light. Invisible to the human eye, it is shown here as blue.
Credit: NASA/JPL-Caltech/M. Seibert (Carnegie Institution for Science)/K. Hoadley (Caltech)/GALEX Team

The Blue Ring Nebula, which perplexed scientists for over a decade, appears to be the youngest known example of two stars merged into one.

In 2004, scientists with NASA's space-based Galaxy Evolution Explorer (GALEX) spotted an object unlike any they'd seen before in our Milky Way galaxy: a large, faint blob of gas with a star at its center. In the GALEX images, the blob appeared blue - though it doesn't actually emit light visible to the human eye - and subsequent observations revealed a thick ring structure within it. So the team nicknamed it the Blue Ring Nebula. Over the next 16 years, they studied it with multiple Earth- and space-based telescopes, but the more they learned, the more mysterious it seemed.

A new study published online on Nov. 18 in the journal Nature may have cracked the case. By applying cutting-edge theoretical models to the slew of data that has been collected on this object, the authors posit the nebula - a cloud of gas in space - is likely composed of debris from two stars that collided and merged into a single star.

While merged star systems are thought to be fairly common, they are nearly impossible to study immediately after they form because they're obscured by debris the collision kicks up. Once the debris has cleared - at least hundreds of thousands of years later - they're challenging to identify because they resemble non-merged stars. The Blue Ring Nebula appears to be the missing link: Astronomers are seeing the star system only a few thousand years after the merger, when evidence of the union is still plentiful. It appears to be the first known example of a merged star system at this stage.

Operated between 2003 and 2013 and managed by NASA's Jet Propulsion Laboratory in Southern California, GALEX was designed to help study the history of star formation throughout most of the universe by taking a census of young star populations in other galaxies. To do this, the mission observed both near-UV light (wavelengths slightly shorter than visible light) and far-UV. Most objects seen by GALEX radiated both near-UV (represented as yellow in GALEX images) and far-UV (represented as blue), but the Blue Ring Nebula stood out because it emitted only far-UV light.

The object's size was similar to that of a supernova remnant, which forms when a massive star runs out of fuel and explodes, or a planetary nebula, the puffed-up remains of a star the size of our Sun. But the Blue Ring Nebula had a living star at its center. What's more, supernova remnants and planetary nebulas radiate in multiple light wavelengths outside the UV range, while further research showed that the Blue Ring Nebula did not. 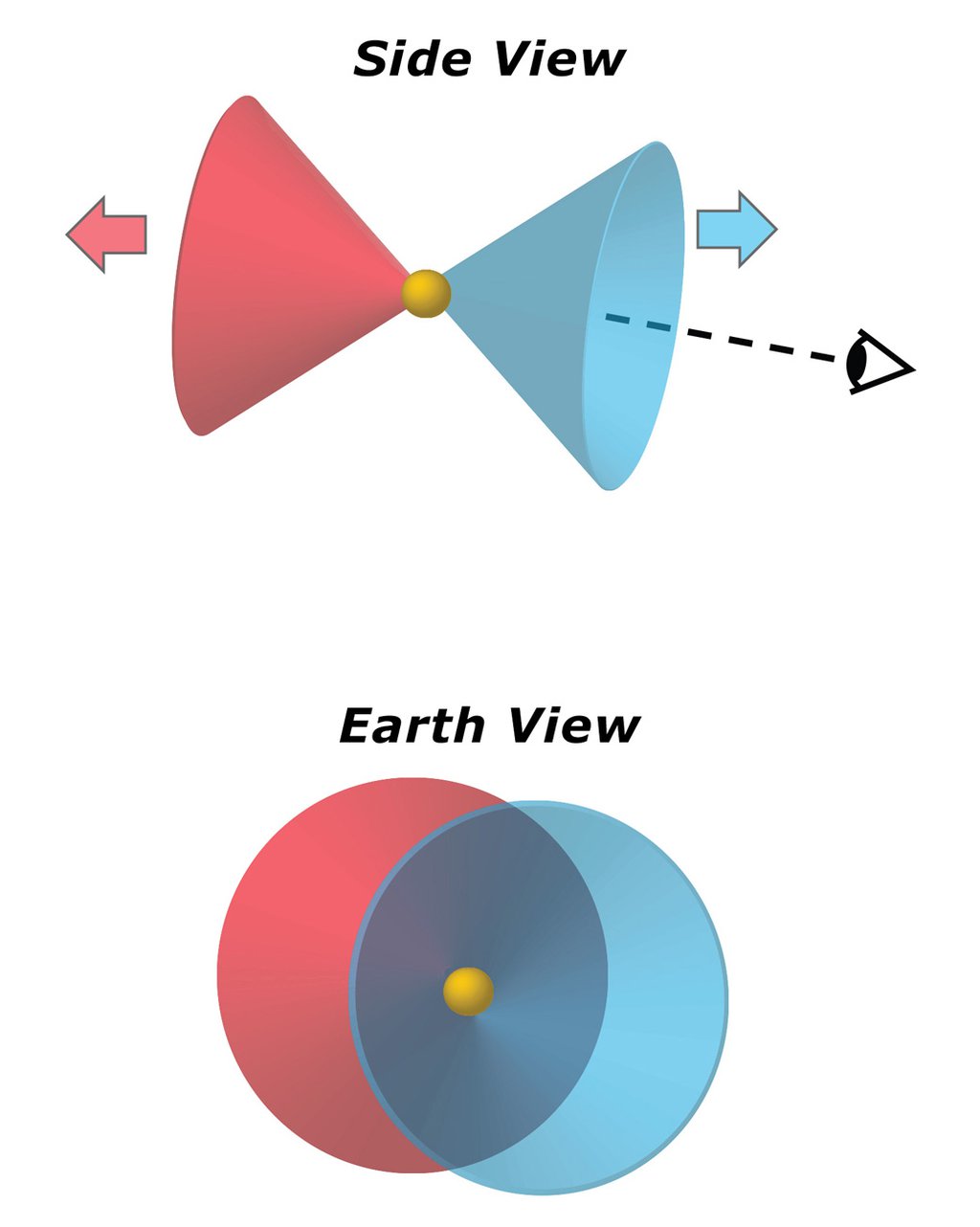 The Blue Ring Nebula consists of two hollow, cone-shaped clouds of debris moving in opposite directions away from the central star. The base of one cone is traveling almost directly toward Earth. As a result, astronomers looking at the nebula see two circles that partially overlap.

In 2006, the GALEX team looked at the nebula with the 200-inch (5.1-meter) Hale telescope at the Palomar Observatory in San Diego County, California, and then with the even more powerful 10-meter (33-foot) telescopes at the W.M. Keck Observatory in Hawaii. They found evidence of a shockwave in the nebula, suggesting the gas composing the Blue Ring Nebula had indeed been expelled by some kind of violent event around the central star. Keck data also suggested the star was pulling a large amount of material onto its surface. But where was the material coming from?

"For quite a long time we thought that maybe there was a planet several times the mass of Jupiter being torn apart by the star, and that was throwing all that gas out of the system," said Mark Seibert, an astrophysicist with the Carnegie Institution for Science and a member of the GALEX team at Caltech, which manages JPL.

But the team wanted more data. In 2012, using the first full-sky survey from NASA's Wide-field Infrared Survey Explorer (WISE), a space telescope that studied the sky in infrared light, the GALEX team identified a disk of dust orbiting closely around the star. (WISE was reactivated in 2013 as the asteroid-hunting NEOWISE mission.) Archival data from three other infrared observatories, including NASA's Spitzer Space Telescope, also spotted the disk. The finding didn't rule out the possibility that a planet was also orbiting the star, but eventually the team would show that the disk and the material expelled into space came from something larger than even a giant planet. Then in 2017, the Habitable Zone Planet Finder on the Hobby-Eberly Telescope in Texas confirmed there was no compact object orbiting the star.

More than a decade after discovering the Blue Ring Nebula, the team had gathered data on the system from four space telescopes, four ground-based telescopes, historical observations of the star going back to 1895 (in order to look for changes in its brightness over time), and with the help of citizen scientists through the American Association of Variable Star Observers (AAVSO). But an explanation for what had created the nebula still eluded them.

The Blue Ring Nebula consists of two expanding cones of debris. The base of one cone is moving toward Earth. Both bases are outlined in magenta, revealing shockwaves created as the debris races through space. Blue represents material behind the shockwave and is visible only where the cones overlap.

By the time Keri Hoadley began working with the GALEX science team in 2017, "the group had kind of hit a wall" with the Blue Ring Nebula, she said. But Hoadley, an astrophysicist at Caltech, was fascinated by the object and its bizarre features, so she accepted the challenge of trying to solve the mystery. It seemed likely that the solution would not come from more observations of the system, but from cutting-edge theories that could make sense of the existing data. So Chris Martin, principal investigator for GALEX at Caltech, reached out to Brian Metzger of Columbia University for help.

As a theoretical astrophysicist, Metzger makes mathematical and computational models of cosmic phenomena, which can be used to predict how those phenomena will look and behave. He specializes in cosmic mergers - collisions between a variety of objects, whether they be planets and stars or two black holes. With Metzger on board and Hoadley shepherding the work, things progressed quickly.

"It wasn't just that Brian could explain the data we were seeing; he was essentially predicting what we had observed before he saw it," said Hoadley. "He'd say, 'If this is a stellar merger, then you should see X,' and it was like, 'Yes! We see that!'"

The team concluded that the nebula was the product of a relatively fresh stellar merger that likely occurred between a star similar to our Sun and another star only about one-tenth that size (or about 100 times the mass of Jupiter). Nearing the end of its life, the Sun-like star began to swell, creeping closer to its companion. Eventually, the smaller star fell into a downward spiral toward its larger companion. Along the way, the larger star tore the smaller star apart, wrapping itself in a ring of debris before swallowing the smaller star entirely.

This was the violent event that led to the formation of the Blue Ring Nebula. The merger launched a cloud of hot debris into space that was sliced in two by the gas disk. This created two cone-shaped debris clouds, their bases moving away from the star in opposite directions and getting wider as they travel outward. The base of one cone is coming almost directly toward Earth and the other almost directly away. They are too faint to see alone, but the area where the cones overlap (as seen from Earth) forms the central blue ring GALEX observed.

Millennia passed. The expanding debris cloud cooled and formed molecules and dust, including hydrogen molecules that collided with the interstellar medium, the sparse collection of atoms and energetic particles that fill the space between stars. The collisions excited the hydrogen molecules, causing them to radiate in a specific wavelength of far-UV light. Over time, the glow became just bright enough for GALEX to see.

Stellar mergers may occur as often as once every 10 years in our Milky Way galaxy, meaning it's possible that a sizeable population of the stars we see in the sky were once two.

"We see plenty of two-star systems that might merge some day, and we think we've identified stars that merged maybe millions of years ago. But we have almost no data on what happens in between," said Metzger. "We think there are probably plenty of young remnants of stellar mergers in our galaxy, and the Blue Ring Nebula might show us what they look like so we can identify more of them."

Though this is likely the conclusion of a 16-year-old mystery, it may also be the beginning of a new chapter in the study of stellar mergers.

"It's amazing that GALEX was able to find this really faint object that we weren't looking for but that turns out to be something really interesting to astronomers," said Seibert. "It just reiterates that when you look at the universe in a new wavelength or in a new way, you find things you never imagined you would."