May 2017 - Going out in a Blaze of Glory: Cassini Science Highlights and Grand Finale 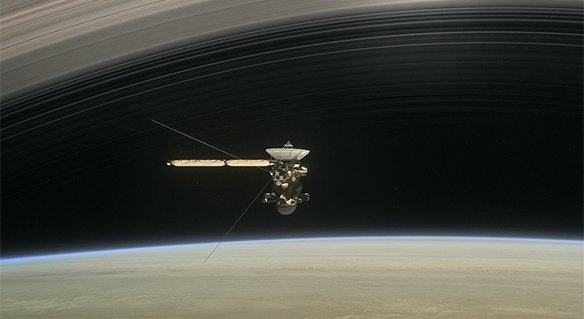 Going out in a Blaze of Glory: Cassini Science Highlights and Grand Finale

The Cassini mission’s findings have revolutionized our understanding of Saturn, its complex rings, the amazing assortment of moons and the planet’s dynamic magnetic environment. Icy jets shoot from the tiny moon Enceladus; Titan’s hydrocarbon lakes and seas are dominated by liquid ethane and methane, and complex pre-biotic chemicals form in the atmosphere and rain to the surface. What new puzzles will Cassini solve before it plunges into Saturn’s atmosphere rather than risk crashing into one of Saturn’s ocean worlds and contaminating it?

Come and hear the story of recent science discoveries and the upcoming excitement during Cassini’s final orbits. Dr. Linda Spilker, Cassini Project Scientist, will present highlights of Cassini’s ambitious inquiry at Saturn and an overview of science observations in the final orbits. Dr. Earl Maize, Cassini Program Manager, will discuss Cassini’s exciting challenges, ultimately flying through a region where no spacecraft has ever flown before.

Speaker(s):
Dr. Linda Spilker is a NASA research scientist at the Jet Propulsion Laboratory in Pasadena, CA. She is currently the Cassini Project Scientist and a Co-Investigator on the Cassini Composite Infrared Spectrometer team and has worked on Cassini since 1988. Since joining JPL over 40 years ago she has worked on the Voyager Project, the Cassini Project and conducted independent research on the origin and evolution of planetary ring systems. She also supports proposals and concept studies for new missions to the outer planets. She enjoys yoga and hiking in National Parks, including her favorite park, Yosemite. She is married, with three daughters and six grandchildren.

Dr. Spilker has worked at JPL for over 40 years, her first and only job out of college. She received her B.A. from Cal State Fullerton, her M.S. from Cal State Los Angeles, and her Ph.D. from UCLA.

Dr. Earl H. Maize
Dr. Maize is the manager of the Cassini Program. He began at JPL working on the navigation and engineering teams for the Galileo mission to Jupiter. After Galileo’s final Earth flyby, he transferred to Cassini as the Spacecraft Operations manager and then Deputy Program Manager. He left the project for eight years to hold management positions in Guidance, Navigation, and Control and Avionics. He returned to Cassini as the Program Manager in January 2013.

Dr. Maize has worked at the Jet Propulsion Laboratory for the past 32 years. He received his bachelor’s degree from Pomona College and his doctorate degree in mathematics from the Claremont Graduate University.

Going out in a Blaze of Glory: Cassini Science Highlights and Grand Finale