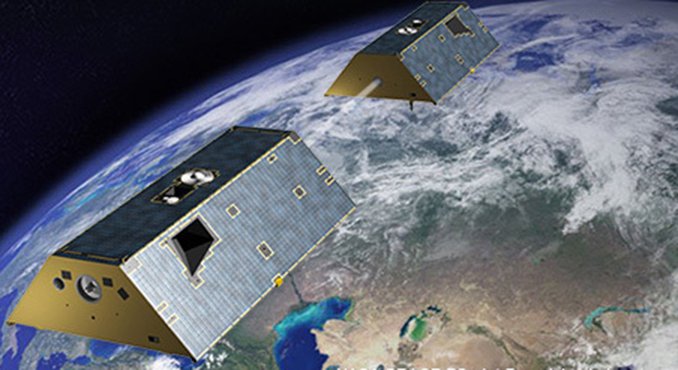 The original Gravity Recovery and Climate Experiment (GRACE) mission, which began orbiting Earth on March 17, 2002, has provided Earth scientists with an unprecedented view of changes in our global water cycle, and allowed precise determination of sea-level rise, polar ice-cap mass loss in Greenland and Antarctica, or large-scale water storage changes over land. These discoveries provide a unique view of Earth's climate and have far-reaching benefits to society and the world's population. The twin satellites of the GRACE Follow-On mission, scheduled for launch in early 2018, will continue this extremely successful work of tracking Earth's water movement, while testing a new laser technology designed to improve the already remarkable precision of its microwave measurement system.

NASA's GRACE Follow-On mission will measure variations in gravity over Earth's entire surface, producing a new map of the gravity field every 30 days. The twin satellites show how the planet's gravity differs not only from one location to another, but also from one period of time to another. From these maps, scientists and data users can monitor changes in underground water storage, the amount of water in large lakes and rivers, soil moisture, ice sheets and glaciers, and sea level caused by the addition of water to the ocean. It even allows oceanographers to map currents at the sea floor - without ever getting their feet wet!

In this talk, I will present the fascinating technology behind gravity measurements from space, review some of the most exciting and surprising findings from GRACE, and provide a peak into what might lie ahead with GRACE Follow-On.

Speaker(s):
Felix Landerer is a research scientist at NASA’s Jet Propulsion Laboratory. He earned a degree in Geophysics from the University of Kiel, a doctorate in Physical Oceanography from the Max Planck Institute for Meteorology in Hamburg (Germany), and was a NASA Postdoctoral Fellow at JPL from 2008 to 2010. Felix studies Earth’s constantly changing hydrosphere by using data from geodetic satellites like GRACE and the ocean altimeters to understand global and regional sea level variations, and provide relevant data for water availability (e.g., aquifer storage, drought monitoring, etc.) in a changing climate. He has published numerous high-impact scientific papers on these topics, and is currently the Deputy Project Scientist for the joint NASA/GFZ GRACE Follow-On satellite project, which will launch in early 2018.