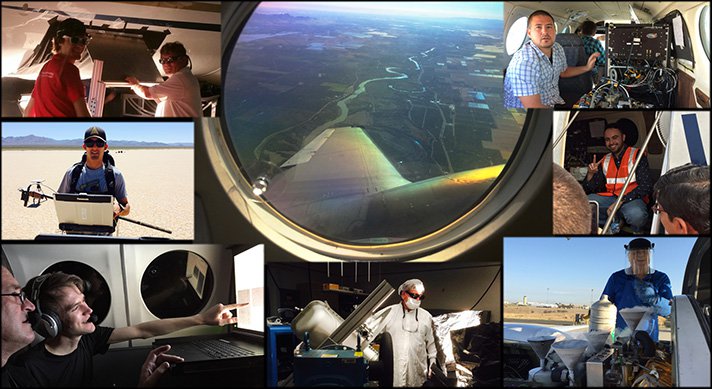 Earth science is a key to understanding our universe. Planetary science relies on ideas and technologies developed and tested here on Earth. Like a Star Trek "sensor sweep," a technique of remote sensing called spectral mapping is used to learn about celestial bodies. These types of instruments use reflected sunlight to produce imagery of the chemical composition of planetary surfaces. The information captured in these data is useful to many fields of Earth environmental, as well as planetary, research. In this talk, research systems engineer Mark Helmlinger will share photos and videos of spectral mapping field deployments to various regions of California, the United States, and India, both in the air and on the ground. He will discuss the science behind measuring spectra of reflected sunlight, and perform physical demonstrations to illuminate a few of the phenomena that make spectral remote sensing possible.

Mark Helmlinger received a BS in Physics from the California State Polytechnic University, Pomona, in 1991. While in college, he was consistently employed part-time in the aerospace industry, including consulting for JPL in 1989. From 1991 to 2005, Mark was the calibration and validation field engineer for the Earth Observation System (EOS) Multi-Angle Imaging SpectroRadiometer (MISR) team at JPL. In that capacity he participated in and lead several domestic and international field deployments. From 2005 to 2011, Mark was employed by Northrop Grumman Aerospace Systems, formerly TRW, as an electro-optical calibration engineer. He has also worked for Labsphere, Inc., maker of optical calibration systems, as their worldwide remote sensing systems development and marketing manager. During these gap years away, he was brought in part-time by various JPL projects to help out with on-going fieldwork. Mark returned full-time to JPL in 2012, to augment JPL's Imaging Spectroscopy Group. There he helps calibrate, operate, and develop custom spectral remote sensing instruments and techniques for NASA and other customers as well as assist with planetary research and exploration development efforts at JPL.