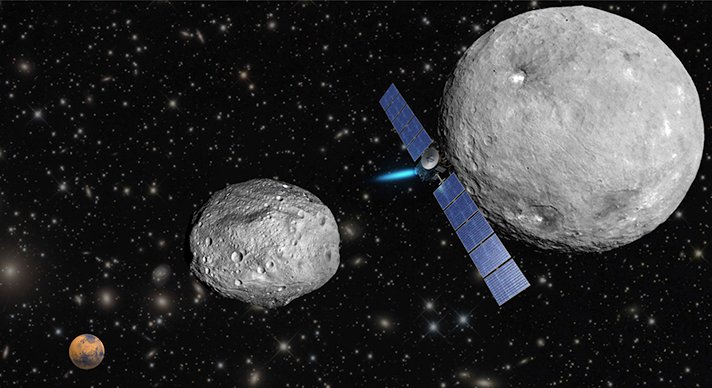 To Boldly Go… Well, You Know: NASA’s Dawn Mission to the Asteroid Belt

The ambitious and exciting Dawn mission, launched in September 2007, is one of NASA's most remarkable ventures into the solar system. The spacecraft completed a spectacular exploration of Vesta in 2011-2012 and arrived in orbit around Ceres last year. These were among the last uncharted worlds in the inner solar system prior to Dawn. They are the two most massive residents of the main asteroid belt, that vast collection of bodies between Mars and Jupiter. Ceres is so large that it is included in the category of dwarf planets, along with Pluto. The alien landscapes Dawn reveals provide humankind with a new perspective on the solar system. Remnants from the time that planets were formed, Ceres and Vesta hold clues that will help scientists understand the dawn of the solar system.

Dawn is the only spacecraft ever to orbit a dwarf planet and is the only one ever to orbit any two extraterrestrial destinations. This year it has been orbiting closer to the surface of Ceres than the International Space Station is to Earth. Such a mission would be impossible without the use of ion propulsion, a technology that has largely been in the domain of science fiction, but which was tested extensively on the Deep Space 1 mission, paving the way for Dawn.

Dr. Marc Rayman will give a fascinating and entertaining presentation on the Dawn mission and its use of ion propulsion as well as its two exotic destinations. He also will share the excitement and profundity of controlling a spacecraft in deep space.