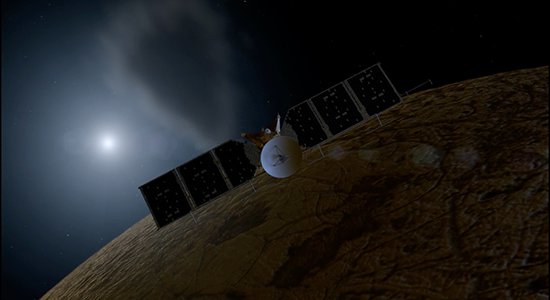 After many years of study, NASA has approved a new start for a spaceflight mission to investigate the mysteries of Jupiter's moon Europa. Galileo spacecraft data suggest that an ocean most likely exists beneath Europa’s icy surface and that the "ingredients" necessary for life (liquid water, chemistry, and energy) could be present within this ocean today, implying that Europa may be a habitable world. Future exploration of Europa has been deemed an extremely high priority for planetary science, given the potential for revolutionizing our understanding of habitats for life. Over the past several years, JPL has led the effort to mature a mission concept that makes multiple flybys of Europa to investigate its habitability, and recently NASA selected a suite of highly capable remote sensing and in situ instruments for the Europa mission. The mission design enables globally distributed regional coverage of the moon’s surface, with 40+ close flybys at altitudes from 25 to 100 km. The Europa multiple flyby mission provides a cost-efficient means to explore Europa and investigate its habitability through understanding the satellite’s ice shell and ocean, composition, and geology. The mission would also investigate current activity, such as plumes, and would provide the high-resolution surface characterization necessary to enable future Europa landers.