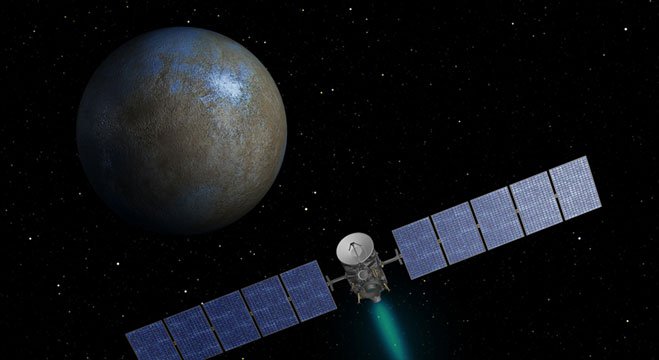 Prior to Dawn's arrival, the dwarf planet Ceres was the largest unexplored world in the inner solar system. Ceres was discovered in 1801, the first object identified at a time when many were searching for a 'missing' planet between Mars and Jupiter. Initially Ceres was believed to be this 'missing planet' but once it was determined that there were many objects forming a 'belt', Ceres was demoted from planet to minor planet, then to asteroid 1 Ceres. The IAU reclassified Ceres as a dwarf planet in 2006. Regardless of its classification, the nearly 1000-km-diameter Ceres is an intriguing planetary body thought to have formed within the first few million years of formation of our solar system. Ceres is roughly 30% water by mass as evidenced by its density and consistent with its shape. The water likely formed a subsurface ocean early in Ceres' history, but now is mostly an ice mantle that lies near its surface. The surface of Ceres is warm compared to the icy moons of Jupiter and Saturn, and this would have enabled convection within the ice and ocean shell, allowing transport of heat and material between the warm rocky interior and the surface. Recently, the Herschel Space Observatory observed water vapor coming from Ceres that appeared to be localized to certain longitudes. These observations, together with previous Hubble Space Telescope and other ground-based observations, tell us that Ceres is a unique object, straddling the boundary between the rocky bodies of the inner solar system, and the ice- and water-rich moons of the outer solar system, and that Ceres has a similar astrobiological potential as those other icy moons. Having completed its comprehensive investigation of protoplanet Vesta in September of 2012, the Dawn spacecraft travelled to Ceres, reaching it early in 2015 to finally pull back the veil on this mysterious world. Highlights from the first science orbits will be presented.