November 2015 - The Juno Mission to Jupiter 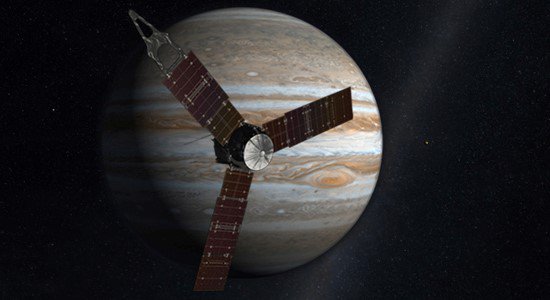 The Juno Mission to Jupiter

Launched in August of 2011, the Juno spacecraft will reach Jupiter in July of 2016. Jupiter is by far the largest planet in our solar system, with more than twice the mass of all the other planets combined. It was almost certainly the first planet to form, and understanding Jupiter's formation is key to understanding how our solar system began. It has the strongest magnetic field of any known planet, and its magnetosphere is arguably the largest structure in our solar system. Despite Jupiter's importance, and despite the fact that it was one of the very first astronomical objects to be studied with a telescope, some major aspects of the giant planet remain a mystery. We don't yet understand its interior structure, including the size or even existence of a central core. The global atmospheric abundance of water, perhaps the most important component from a planetary origin point of view, remains unknown. Fundamental aspects of Jupiter's atmospheric dynamics remain to be explained. Its magnetic field is understood to originate in the swirling motions of an enormous interior ocean of liquid metallic hydrogen, but the specific workings of that dynamo remain a mystery. From a highly elliptical polar orbit, Juno will investigate these and other scientific questions. Juno is expected to survive Jupiter's dangerous radiation environment for over a year, long enough to make over 30 close perijove passes. Skimming a few thousand kilometers above the cloud tops, Juno will measure the magnetic and gravitational fields, use microwave radiometry to determine the global water abundance, image the planet at visible, infrared, and ultraviolet wavelengths, and measure the fields and particles in the Jovian magnetosphere. Improving our understanding of Jupiter will enable us to better understand the history of our solar system and our own origin story.

The Juno Mission to Jupiter