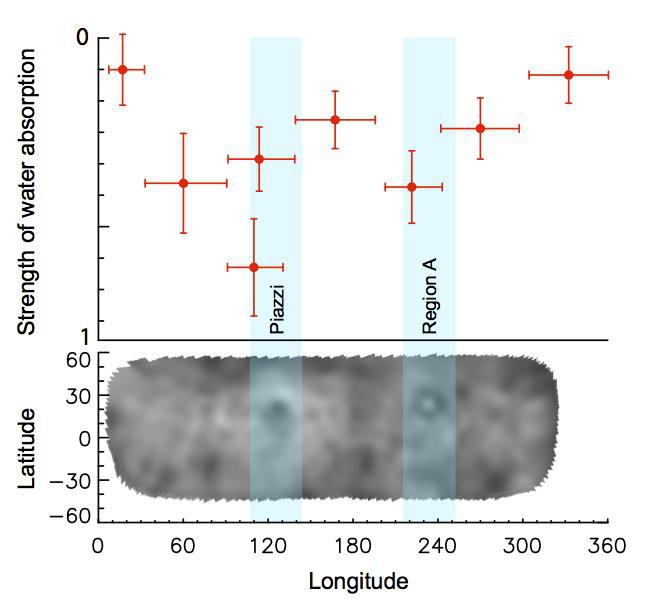 This graph shows variability in the intensity of the water absorption signal detected at Ceres by the Herschel space observatory on March 6, 2013. The most intense readings correspond to two dark regions on the surface known as Piazzi and Region A, identified in the ground-based image of Ceres by the W.M. Keck Observatory on Mauna Kea, Hawaii. The two data points at 110 degrees longitude were taken in a time interval of about 9 hours -- equal to the Ceres rotation period -- showing that variability in the water vapor production is possible even over short periods.

Herschel is a European Space Agency mission, with science instruments provided by consortia of European institutes and with important participation by NASA. While the observatory stopped making science observations in April 2013, after running out of liquid coolant, as expected, scientists continue to analyze its data. NASA's Herschel Project Office is based at NASA's Jet Propulsion Laboratory, Pasadena, Calif. JPL contributed mission-enabling technology for two of Herschel's three science instruments. The NASA Herschel Science Center, part of the Infrared Processing and Analysis Center at the California Institute of Technology in Pasadena, supports the United States astronomical community. Caltech manages JPL for NASA.