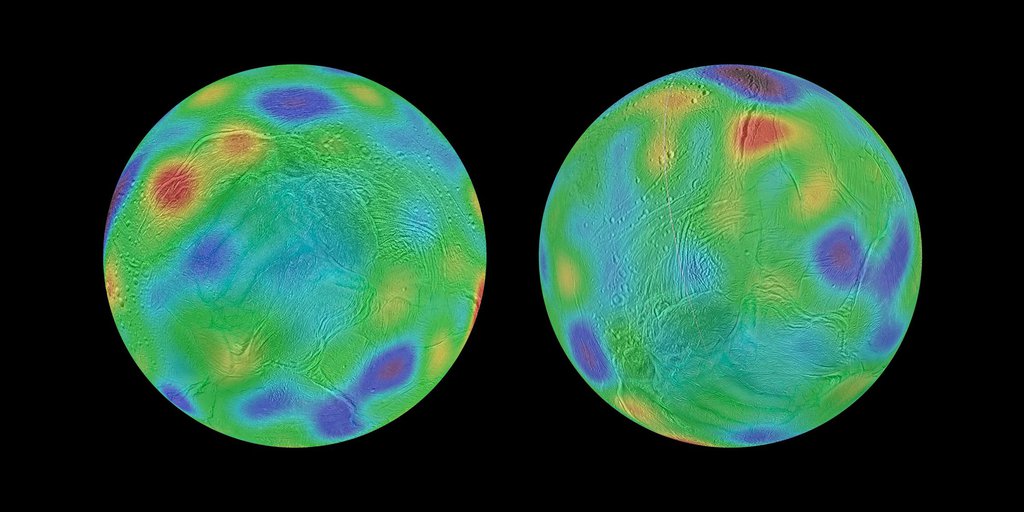 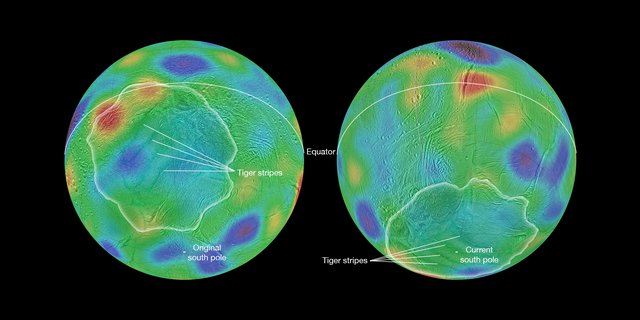 Working with image data from NASA's Cassini mission, researchers have found evidence that Saturn's moon Enceladus may have tipped over, reorienting itself so that terrain closer to its original equator was relocated to the poles. This phenomenon is known as true polar wander.

Researchers discovered a chain of basins across the surface of Enceladus along with a pair of depressions that line up with an equator and poles, respectively, if the moon's axis of rotation was reoriented by about 55 degrees of latitude.

These maps look toward the icy moon's southern hemisphere, with colors representing highs and lows. Purple represents the lowest elevations, while red represents the highest.

The map at left shows the surface of Enceladus in its possible ancient orientation, millions of years ago. The chain of basins representing topographic lows can be seen in blue and purple, running along the equator, with an additional low region around the original south pole. The region that encloses the moon's currently active south polar terrain, with its long, linear "tiger stripe" fractures, would have been at middle latitudes just south of the equator. The map at right shows the current orientation of Enceladus.

The Cassini mission is a cooperative project of NASA, ESA (the European Space Agency) and the Italian Space Agency. The Jet Propulsion Laboratory, a division of the California Institute of Technology in Pasadena, California, manages the mission for NASA's Science Mission Directorate, Washington. The Cassini orbiter and its two onboard cameras were designed, developed and assembled at JPL. The imaging operations center is based at the Space Science Institute in Boulder, Colorado.