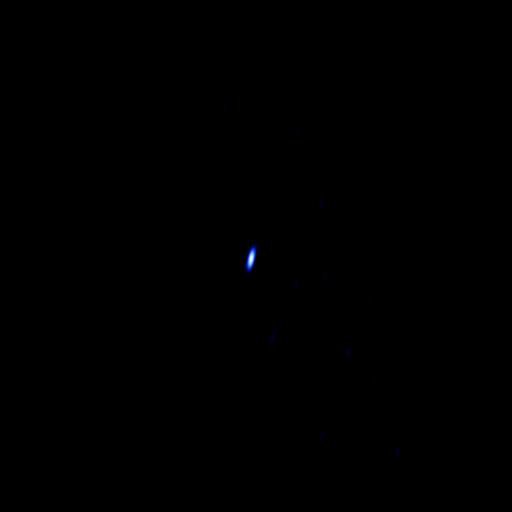 The signal of NASA's Voyager 1 spacecraft -- the most distant human-made object -- has been spotted from Earth by the National Radio Astronomy Observatory's 5,000-mile-wide (8,000-kilometer-wide) Very Long Baseline Array (VLBA), which links radio telescopes from Hawaii to St. Croix.

These radio telescopes cannot see Voyager 1 in visible light, but rather "see" the spacecraft signal in radio light. Antennas make up a radio telescope like mirrors and pixels make up an optical one. The telescopes made a special attempt to look for Voyager 1's signal to test their sensitivity.

Voyager 1's main transmitter radiates around 22 watts, which is comparable to a typical ham radio or a refrigerator light bulb. Though incredibly weak by the standards of modern wireless communications, Voyager 1's signal is bright when compared to most natural objects studied by radio telescopes.

The image is about 0.5 arcseconds on a side. An arcsecond is the apparent size of a penny as seen from 2.5 miles (4 kilometers) away. The slightly oblong shape of the image is a result of the array's configuration.N