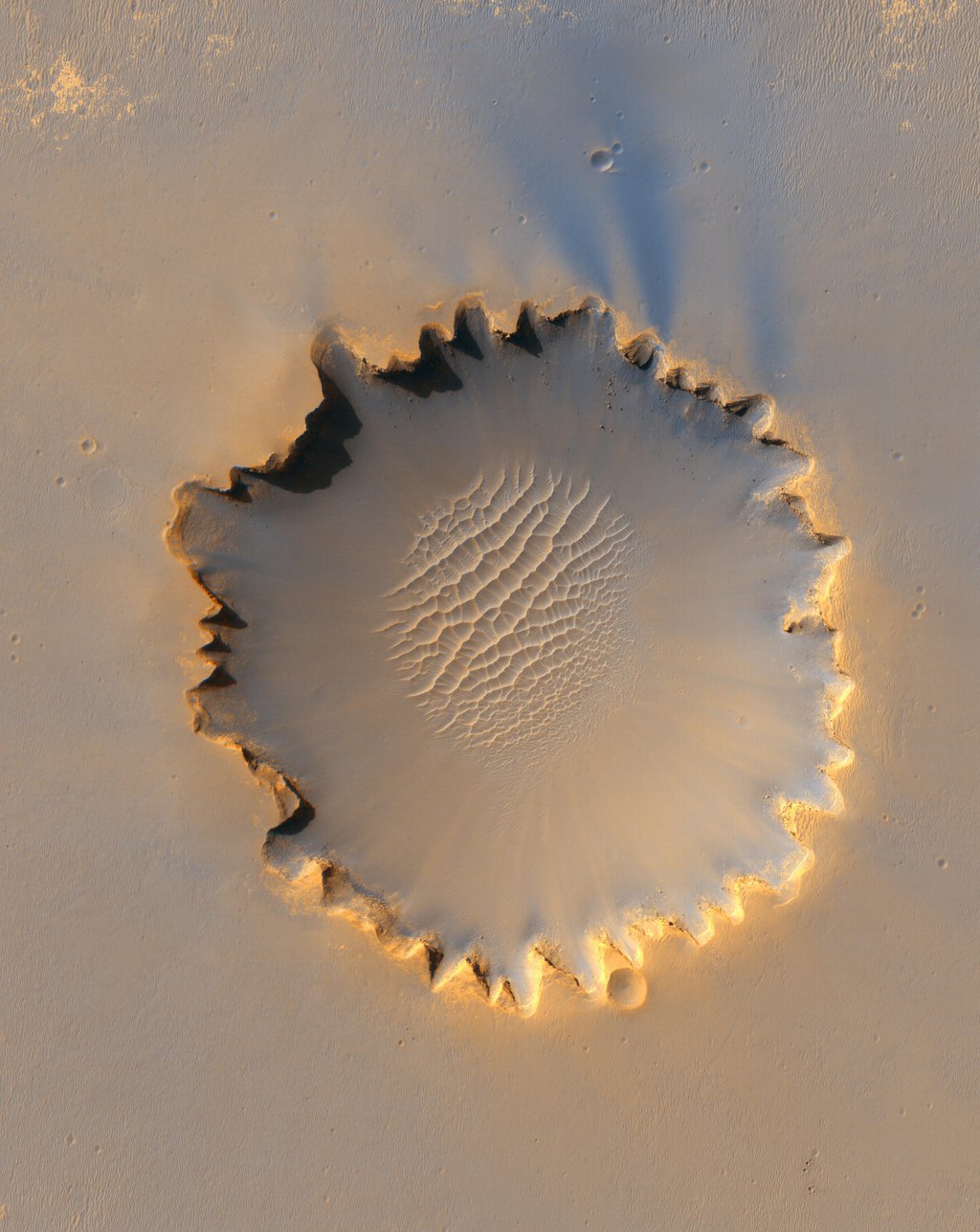 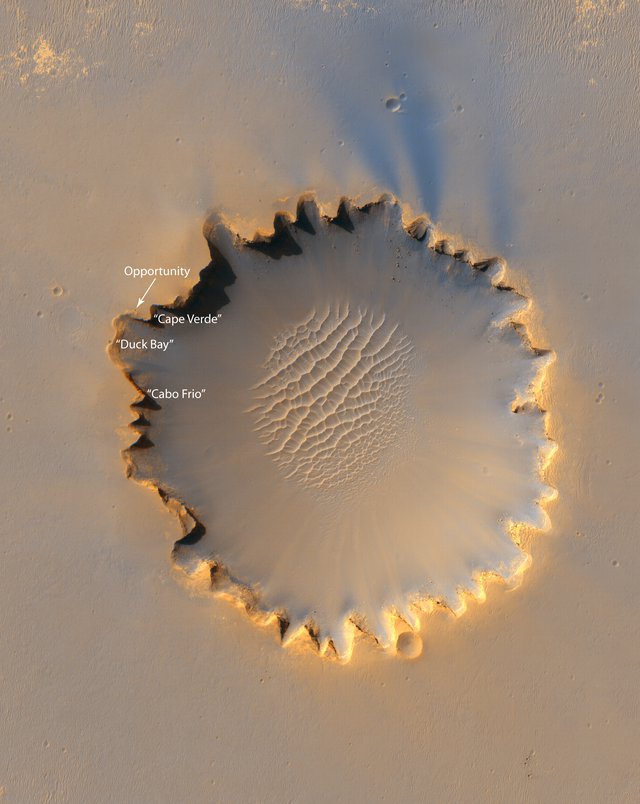 This image from the High Resolution Imaging Science Experiment on NASA's Mars Reconnaissance Orbiter shows "Victoria crater," an impact crater at Meridiani Planum, near the equator of Mars. The crater is approximately 800 meters (half a mile) in diameter. It has a distinctive scalloped shape to its rim, caused by erosion and downhill movement of crater wall material. Layered sedimentary rocks are exposed along the inner wall of the crater, and boulders that have fallen from the crater wall are visible on the crater floor. The floor of the crater is occupied by a striking field of sand dunes.

Since January 2004, the Mars Exploration Rover Opportunity has been operating at Meridiani Planum. Five days before this image was taken, Opportunity arrived at the rim of Victoria crater, after a drive of more than 9 kilometers (over 5 miles). The rover can be seen in this image, at roughly the "ten o'clock" position along the rim of the crater.

This view is a portion of an image taken by the High Resolution Imaging Science Experiment (HiRISE) camera onboard the Mars Reconnaissance Orbiter spacecraft on Oct. 3, 2006. The complete image is centered at minus7.8 degrees latitude, 279.5 degrees East longitude. The range to the target site was 297 kilometers (185.6 miles). At this distance the image scale is 29.7 centimeters (12 inches) per pixel (with 1 x 1 binning) so objects about 89 centimeters (35 inches) across are resolved. The image shown here has been map-projected to 25 centimeters (10 inches) per pixel and north is up. The image was taken at a local Mars time of 3:30 PM and the scene is illuminated from the west with a solar incidence angle of 59.7 degrees, thus the sun was about 30.3 degrees above the horizon. At a solar longitude of 113.6 degrees, the season on Mars is northern summer. The full-resolution TIFF file (HiRISE number TRA_000873_1780) can be viewed or downloaded here PIA08813-hi-res.tif; the full-resolution JPEG can be viewed or downloaded here PIA08813-hi-res.jpg. [Photojournal note: Due to the large sizes of the high-resolution TIFF and JPEG files, some systems may experience extremely slow downlink time while viewing or downloading these images; some systems may be incapable of handling the download entirely.]

This is an enhanced-color view generated from images acquired by theHiRISE camera using its red filter and blue-green filter.

JPL, a division of the California Institute of Technology in Pasadena, manages the Mars Reconnaissance Orbiter for NASA's Science Mission Directorate, Washington. Lockheed Martin Space Systems is the prime contractor for the project and built the spacecraft. The HiRISE camera was built by Ball Aerospace & Technologies Corporation and is operated by the University of Arizona.