Venus Nightside through the Near Infrared Mapping Spectrometer 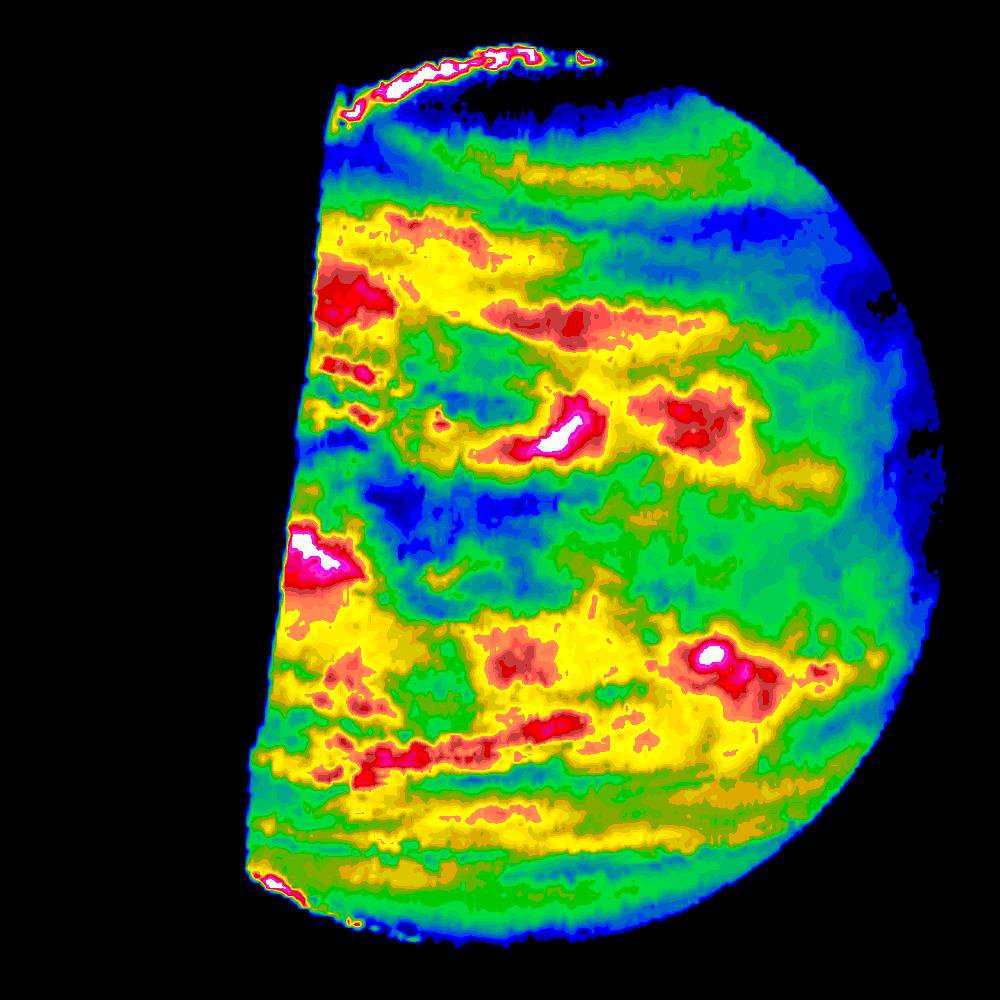 This image is a false color version of a near infrared map of lower level clouds on the night side of Venus, obtained by the Near Infrared Mapping Spectrometer aboard the Galileo spacecraft as it approached the planet February 10, 1990. Taken from an altitude of about 60,000 miles above the planet, at an infrared wavelength of 2.3 microns (about three times the longest wavelength visible to the human eye) the map shows the turbulent, cloudy middle atmosphere some 30-33 miles above the surface, 6-10 miles below the visible cloudtops. The image shows the radiant heat from the lower atmosphere (about 400 degrees Fahrenheit) shining through the sulfuric acid clouds, which appear as much as 10 times darker than the bright gaps between clouds. The colors indicate relative cloud transparency; white and red show thin cloud regions, while black and blue represent relatively thick clouds. This cloud layer is at about 30 degrees Fahrenheit, at a pressure about 1/2 Earth's atmospheric pressure. 2/3 of the dark hemisphere is visible, centered on longitude 350 West, with bright slivers of daylit high clouds visible at top and bottom left. Near the equator, the clouds appear fluffy and blocky; farther north, they are stretched out into East West filaments by winds estimated at more than 150 mph, while the poles are capped by thick clouds at this altitude. The Near Infrared Mapping Spectrometer (NIMS) on the Galileo spacecraft is a combined mapping (imaging) and spectral instrument. It can sense 408 contiguous wavelengths from 0.7 microns (deep red) to 5.2 microns, and can construct a map or image by mechanical scanning. It can spectroscopically analyze atmospheres and surfaces and construct thermal and chemical maps. Designed and operated by scientists and engineers at the Jet Propulsion Laboratory, NIMS involves 15 scientists in the U.S., England, and France. The Galileo Project is managed for NASA's Office of Space Science and Applications by JPL; its mission is to study the planet Jupiter and its satellites and magnetosphere after multiple gravity assist flybys at Venus and the Earth.