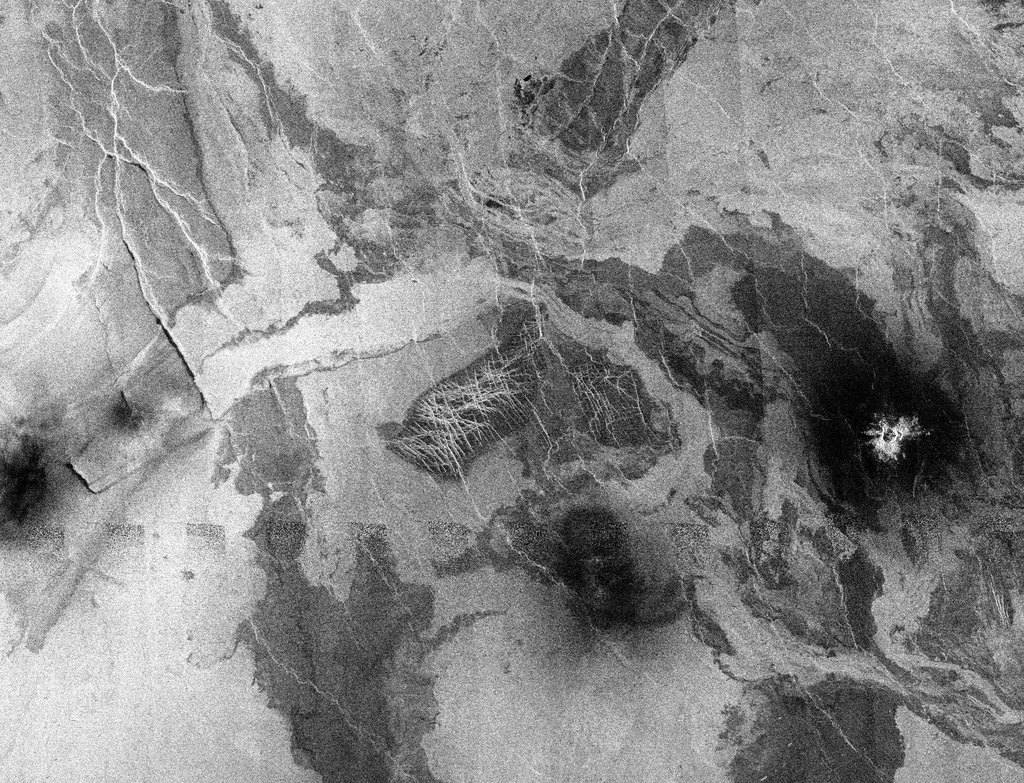 This Magellan image is centered at 55 degrees north latitude, 348.5 degrees longitude, in the eastern Lakshmi region of Venus. This image, which is of an area 300 kilometers (180 miles) in width and 230 kilometers (138 miles) in length, is a mosaic of orbits 458 through 484. The image shows a relatively flat plains region composed of many lava flows. The dark flows mostly likely represent smooth lava flows similar to 'pahoehoe' flows on Earth while the brighter lava flows are rougher flows similar to 'aa' flows on Earth. (The terms 'pahoehoe' and 'aa' refer to textures of lava with pahoehoe a smooth or ropey surface, and aa a rough, clinkery texture). The rougher flows are brighter because the rough surface returns more energy to the radar than the smooth flows. Situated on top of the lava flows are three dark splotches. Because of the thick Venusian atmosphere, the small impactors break up before they reached the surface. Only the fragments from the broken up impactor are deposited on the surface and these fragments produce the dark splotches in this image. The splotch at the far right (east) has a crater centered in it, indicating that the impactor was not completely destroyed during its journey through the atmosphere. The dark splotches in the center and to the far left in this image each represent an impactor that was broken up into small fragments that did not penetrate the surface to produce a crater. The dark splotch at the left has been modified by the wind. A southwest northeast wind flow has moved some of the debris making up the splotch to the northeast where it has piled up against some small ridges.