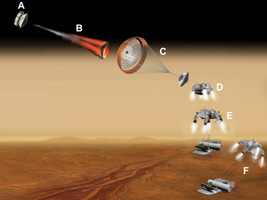 This artist's concept of a proposed Mars sample return mission portrays a series of six steps (A through F) in the spacecraft's landing on Mars. NASA and the European Space Agency are collaborating on proposals for a mission to gather samples of Martian rocks and bring them to Earth after 2020. This illustration depicts preliminary concepts, not a finished design.

The series begins at upper left, where the aeroshell capsule is still attached to the cruise stage that has provided power and maneuvering during the trip from Earth to Mars.

After jettisoning the cruise stage, the aeroshell uses friction with the Martian atmosphere to decelerate. The aeroshell protects other components of the flight system (enclosed inside) from the heat generated during the plunge through the upper atmosphere.

In the third step portrayed, the spacecraft's parachute further slows the descent.

After separation from the parachute and aeroshell, retro rockets on the descent stage fire to control the speed of the final approach toward the ground.

The descent stage begins lowering the lander on a bridle. Timing of crucial steps during this final approach is based on radar input about the spacecraft's altitude and velocity.

F. The lander -- bearing a rover and an ascent vehicle -- touches down, the connecting cords are severed and the descent stage flies out of the way.

After the landing, the rover would deliver previously cached samples to the ascent vehicle, which would then lift the samples off the surface of Mars for a rendezvous in orbit with a spacecraft that would take the samples to Earth.