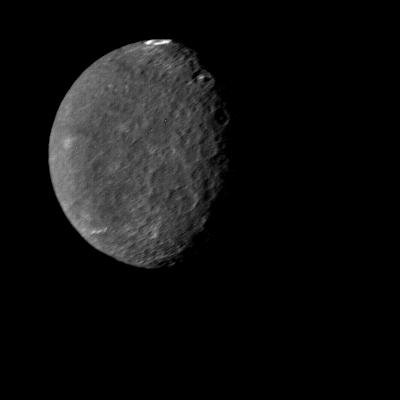 The southern hemisphere of Umbriel displays heavy cratering in this Voyager 2 image, taken Jan. 24, 1986, from a distance of 557,000 kilometers (346,000 miles). This frame, taken through the clear-filter of Voyager's narrow-angle camera, is the most detailed image of Umbriel, with a resolution of about 10 km (6 mi). Umbriel is the darkest of Uranus' larger moons and the one that appears to have experienced the lowest level of geological activity. It has a diameter of about 1,200 km (750 mi) and reflects only 16 percent of the light striking its surface; in the latter respect, Umbriel is similar to lunar highland areas. Umbriel is heavily cratered but lacks the numerous bright-ray craters seen on the other large Uranian satellites; this results in a relatively uniform surface albedo (reflectivity). The prominent crater on the terminator (upper right) is about 110 km (70 mi) across and has a bright central peak. The strangest feature in this image (at top) is a curious bright ring, the most reflective area seen on Umbriel. The ring is about 140 km (90 miles) in diameter and lies near the satellite's equator. The nature of the ring is not known, although it might be a frost deposit, perhaps associated with an impact crater. Spots against the black background are due to 'noise' in the data. The Voyager project is managed for NASA by the Jet Propulsion Laboratory.